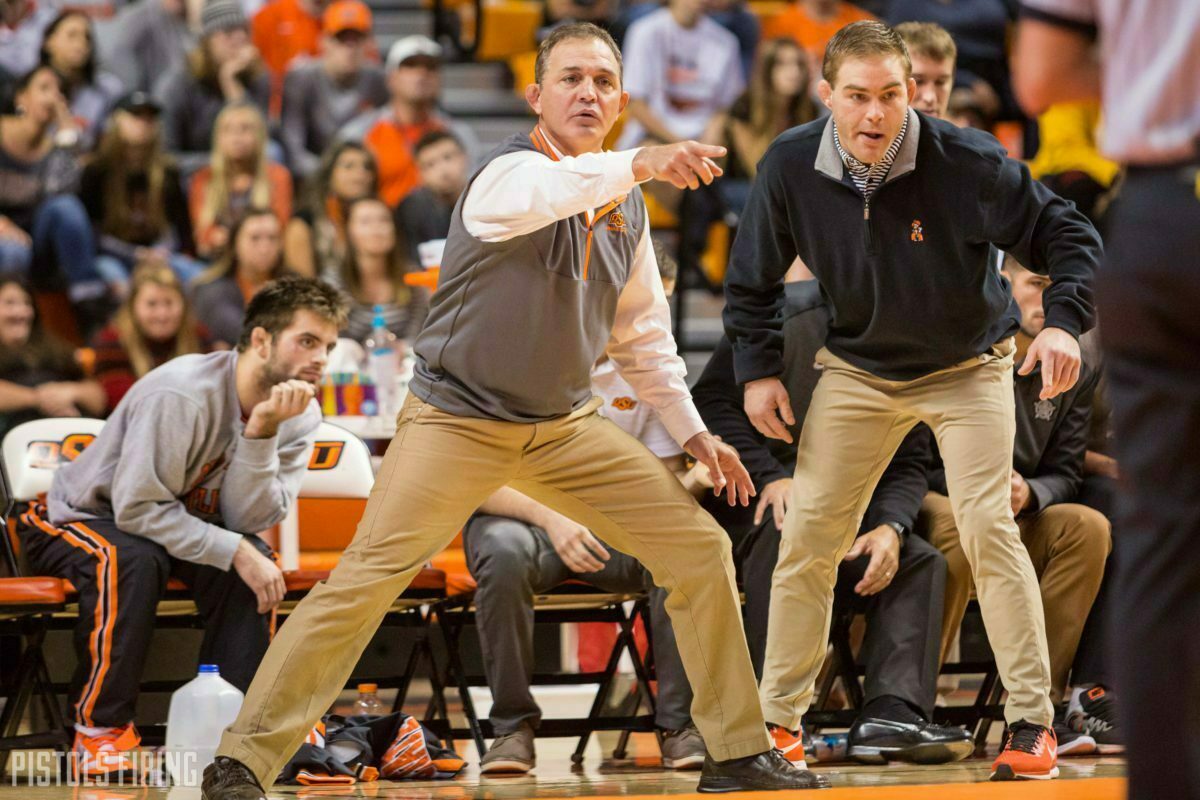 John Smith has a problem at 149 pounds that most college wrestling coaches would envy. He has to sort out and decide who will be the starter at probably the deepest weight class in any single wrestling room in the country. All three vying for the spot at OSU are All-American caliber wrestlers.

The first candidate is already an All-American; Geo Martinez started off his career at Boise State going 30-7 as a true freshman, winning a Pac 12 title, and earning Pac-12 Freshman of the year honors before falling just one match short of being an All-American at the NCAA tournament.

His sophomore year, Geo won another Pac-12 title and went on to the NCAA tournament to became an All-American. After a coaching change at BSU, Geo transferred to Oklahoma State and took a redshirt year behind Anthony Collica. Geo is now sitting in the starting role for the Cowboys having taken 2 losses this year, one to teammate Boo Lewallen in an open tournament and one to the current #10 ranked wrestler Troy Heilman out of North Carolina. The same weekend he lost to Heilman, he also won 2 ranked matches and dominated 4th ranked Chisko out of Va. Tech.

Redshirt sophomore Boo Lewallen has impressed to this point in his career too, and although he’s not served in a starting role yet, he’s outdone what many projected he would coming out of high school.

Boo sat out his freshman season due to injury, but had an extremely impressive 2016-2017 season wrestling at 141 pounds behind Dean Heil. Lewallen really made a name for himself in Reno by winning the tournament and knocking off the previous year NCAA runner up Bryce Meredith. Lewallen has head to head wins, in extremely close matches, over both Martinez and Moran this year. He also looked great at the Lindenwood open winning the tournament and knocking off some ranked wrestlers in the process.

The last hat in the ring for the starting job at 149 though is Tristan Moran. He had a pretty impressive redshirt year and looked good in some freestyle tournaments also. Prior to Martinez transferring and seeing what Lewallen has done coming off his injury, I had thought he would likely come out as the starter to replace Collica.

The transfer of Martinez and Lewallen’s impressive run last year have created a interesting 3-man race for the spot though. Moran finished 3rd behind Lewallen at Reno last year, but ahead of him in 6th at the Southern Scuffle. He also had a pretty solid showing at the Journeyman this year winning his pool, but did lose the head to head in the finals of the OCU open to Lewallen. Here’s Moran taking out Lewallen in a HS freestyle match in 2015.

On the surface, it looks like Boo is the leading candidate to get the starting nod next semester. He very well could be “the guy” when you look at the head to head wins he has over Geo and Tristan, but both those matches were very close and it’s tough to determine a starter based on the head to head when you consider the guys see each other every day in the room.

The coaches see certain things in the room they will use to make the decision. They’ll  look at the head to head, will likely try to enter all three of them into the same tournaments, and even maybe mix up the dual starter from time to time in the process of assessing all of this, but it will be very interesting to see who comes out as the starter here.

My guess is Lewallen based on the head to head matches and what I’ve seen in some of the tournaments so far, but Geo’s a proven All-American and Moran has impressed as well. Could be any of the three. Given the talent pool to pick from, though, John Smith certainly can’t go too sideways here no matter which direction he chooses to take.