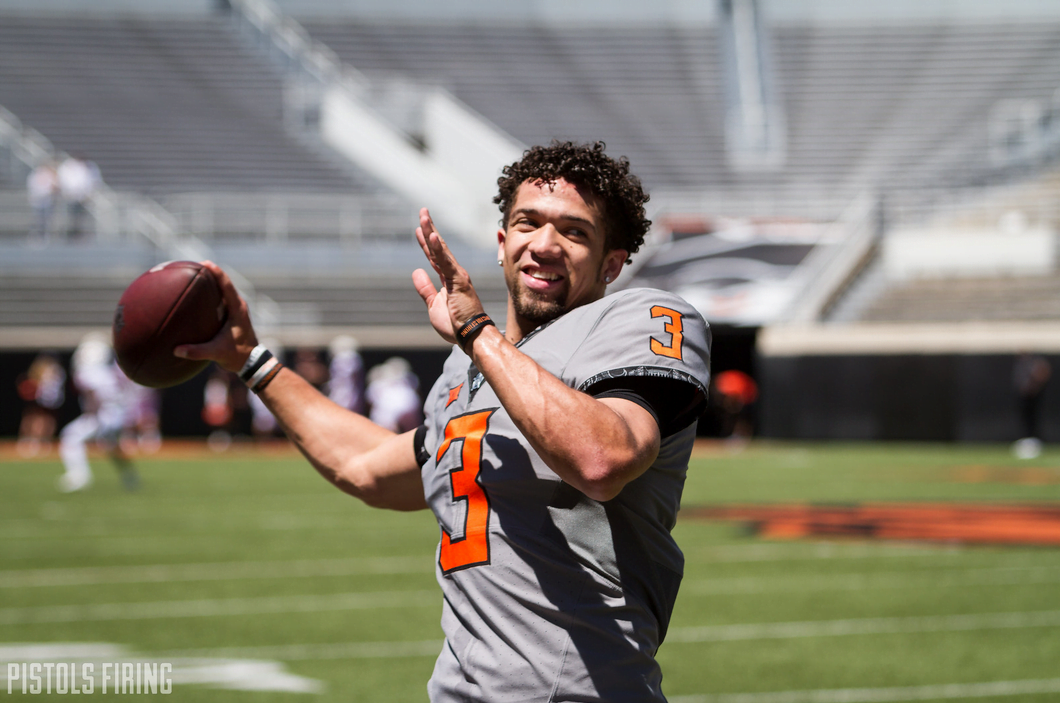 Oklahoma State needs Spencer Sanders, the flashy redshirt freshman quarterback from Texas, to win the starting job going in to 2019.

Not midway through his second season on campus. Not right before conference play.

Yes, there are other options OSU could win with — and perhaps win big with. Hawaii graduate transfer Dru Brown, in his second season with the program, has surprised those around the program with his strong arm, mobility and accuracy. True freshman early enrollee Brendan Costello shows promise and poise, and figures to one day be a franchise-caliber player, a gunslinger OSU can one day holster its offensive weapons to.

But make no mistake: Sanders is the rightful heir to the throne. He is Jon Snow in this football-slanted metaphor of Game of Thrones. It is both his for the taking — Gundy has played out the string because he wants QB1 to win the job — and also his to lose.

OSU needs Sanders to win the job to stabilize its long-term plan at the position. Brown, a solid arm with mobility to boot, could be a viable option, sure — but he has one year of eligibility left. Costello’s a year away from being a year away. Sanders, meanwhile, can take hold of the position, cradle it, come into his own in 2019 and reach the 15-game threshold, which Gundy says is critical to becoming comfortable in your own pass-protected pocket, by middle of 2020. Take the job, and it’s almost certainly his until he either A.) graduates or B.) turns pro early.

And if he’s able to turn pro early, you’d have to think handing him the job would have gone smoothly, huh? Wins, bowls, rings (?), the whole deal.

OSU needs Sanders to win it, too, because of what it means (and would mean) in recruiting.

For instance: my wife has a diamond ring I bought her when we got engaged several years ago. She wears it every day (sometimes even proudly!), she takes it off every night and puts it back in its case, she takes it to the jeweler every six months to get it polished and cleaned. She nurtures it with pride because she wants it to live a long life and prosper (or something like that). In the process, she has also shown that if I decide to spend money on other expensive jewelry down the road, she will take care of it. The next jewelry I buy will not be a waste of money, a flushing down the toilet of my hard-earned cash. In fact, I could take solace knowing that a future jewelry purchase will be adored like a member of our family.

Oh yeah, you better believe I am comparing Spencer Sanders to my wife’s wedding ring!

Sanders is the crown jewel of OSU’s treasure trove. Four-star quarterback out of high school, Gatorade Texas Player of the Year, highly-touted, highly-recruited. When he committed and signed with OSU, people knew. It was a big deal.

A bigger deal would be for all that talent to not succeed.

If Sanders can win the job and thrive, what does the 2020 Gatorade Texas Player of the Year then think about OSU? Hmm, well Spencer Sanders turned down bluebloods to go play in a QB-friendly system at OSU.

If Sanders loses the gig, or worse, if he loses the gig and decides to transfer, what then does the 2020 Gatorade Texas Player of the Year then think about OSU? I’ll tell you.

Sanders winning the job would be a win for the program all the way around. It would stabilize the team, it would solidify the most important position on the field for the foreseeable future, and it would, undeniably, help OSU’s recruiting pitches to other highly-touted recruits, in Texas and abroad, ring a little less hollow than an alternative outcome.

So if you’re rooting for chaos, or rooting for a Cornelius-like development in which the older player wins the gig, I suggest you reconsider and root for the talented and inexperienced youngster from Texas to win the job outright. And soon. If he can take control of the position and star, it will make not just Sanders, but the entire program, shine like a diamond.