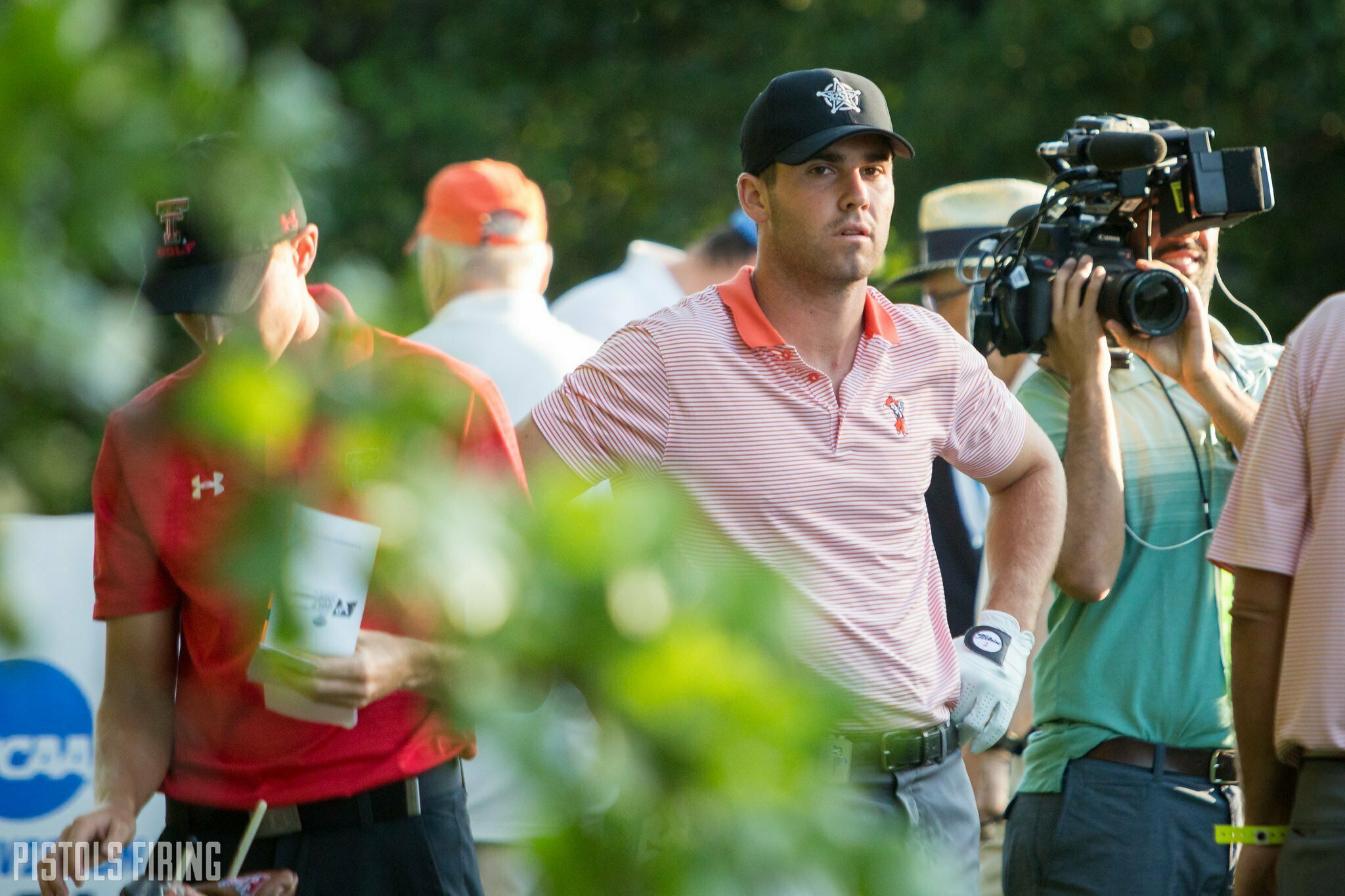 What were the odds of somebody in orange and black not named “Viktor” or “Matthew” winning the NCAA Championship this week at Blessings Golf Club in Fayetteville? Apparently better than I thought they were after 36 holes of play.

Sophomore Austin Eckroat leads everyone after shooting 69-69 in the first two rounds to get in at 6-under 138. Most notably, he’s up one on sophomore Matthew Wolff and Cal superstar Collin Morikawa. Oh, and the Pokes are up 12 on their next closest competition after firing a preposterous 276 on Saturday.

No other team was better than 287.

Put it this way, you could have taken OSU’s four worst scores from Saturday instead of their four best, and they still would have tied for the best team number on the day. 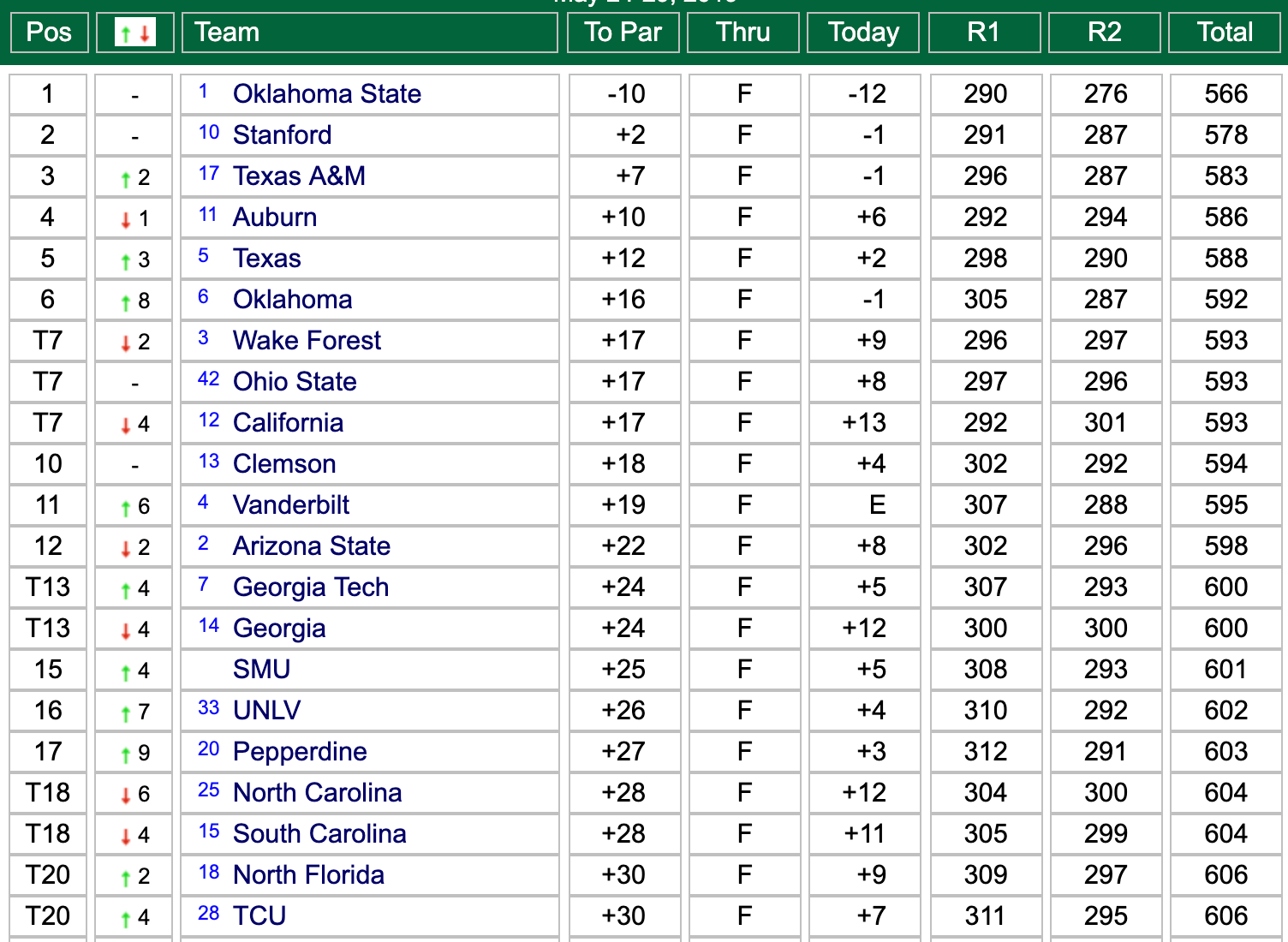 “We had a really good round today,” said head coach Alan Bratton. “This is why you play hard all year so you can earn a top seed and get an early tee time. We were out here at 7 a.m. with little to no wind, which is a huge advantage out here.

“This is already a tough course and the wind makes it harder. We took advantage of the lack of wind on the front nine and got some momentum. Our goal is to try to get to know the course better so we’ll get back to it tomorrow and just be ourselves.”

Wolff tied the course record with a 66 that got him in the hunt and within one of his teammate — and soon to be U.S. Open-playing — Eckroat. All of this after going out in 40 on Friday. Since then he’s fired nine-hole scores of 33-33-33 for the 139 total.

“I didn’t have my best round yesterday but I just hung in there and figured some things out,” said Wolff. “I was able to minimize some mistakes and close some things out. It’s nice to go out there and post a low score to help out my team. I didn’t know that I tied the record, so it just shows how hard the course is. Hopefully I can break it by the end of the week.”

“He played well today,” added Bratton. “I’m really proud of what he did. He was four over par yesterday through the first nine holes, but since then he’s gone nine under. It’s a good lesson for anyone out there playing golf to remember you can’t put too much importance on any one shot.” 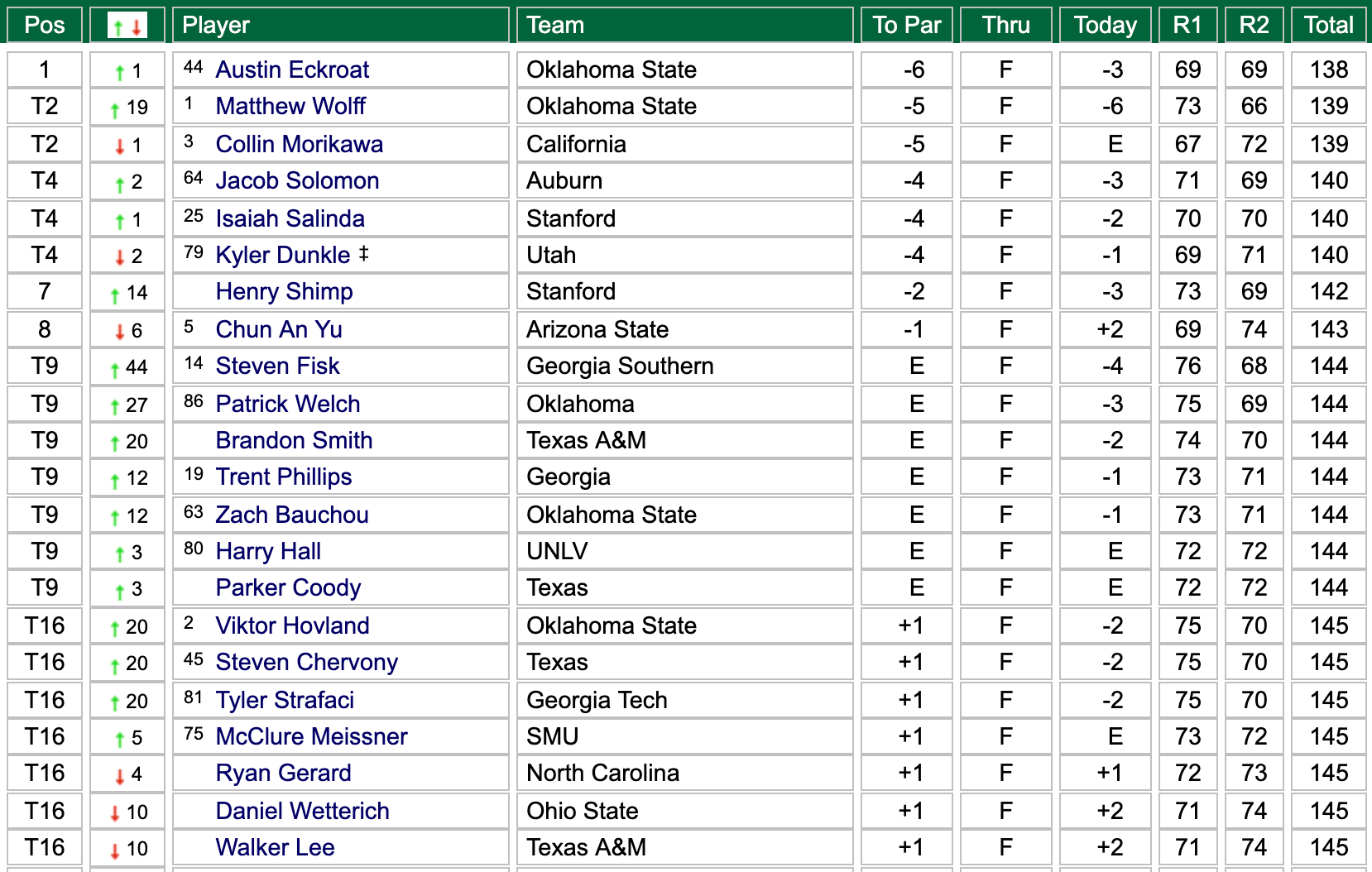 There’s still a lot of golf left because this field will be cut to 15 teams after Sunday’s round, but OSU is undoubtedly in control to get the No. 1 seed in the match play portion of the event, which starts on Tuesday. The big question over the next 36 is who will win the individual award. For Wolff it would be a sixth win of an unreal sophomore season. For Eckroat, a bookend to an incredible month.

Morikawa will be a tough out — and the two guys they share a private jet with won’t go quietly either — but when the chips are down in a 72-hole event like this with the stakes as high as they’ve been all season, you ride talent. And there’s nobody in amateur golf more talented than Wolff. It doesn’t mean he’ll win, but it does mean with a record-tying 66 he’s no longer the chaser but the one being chased.