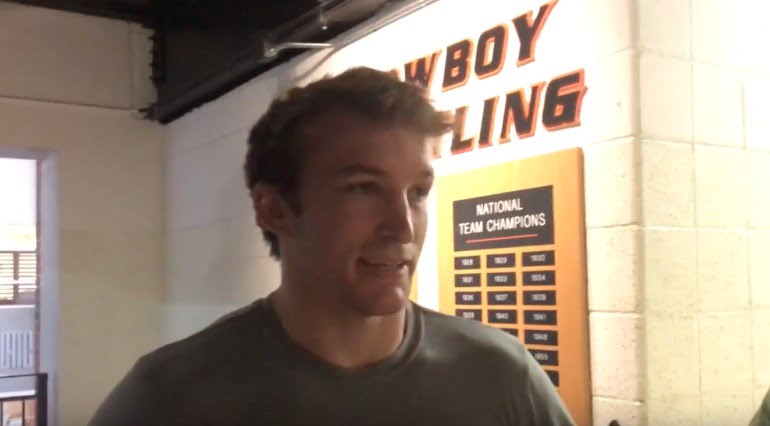 Oklahoma State wrestling is looking to finish the dual season undefeated for the first time since 2002-2003 this weekend as they take on Big 12 foes Wyoming and No. 16 Oklahoma. The Cowboys still hold the top spot in the NWCA/USA Today polls in spite of Penn State sneaking up on them.

Penn State, however, still cannot match the depth of the Cowboys who have nine wrestlers ranked to All-American and a 10th ranked No. 11.

Coach Smith is not taking the duals this weekend lightly, especially with former Cowboy wrestler Mark Branch coming in to Gallagher-Iba as an opposing coach. With so many former Cowboys in the coaching ranking, Coach Smith says that he prefers to keep them at arm’s length.

“It’s good to see it when they don’t come in here,” said Smith. “I like to pull up their results each week and see how they’re doing. They’re competitors coming in and they want to have a great performance. It’s no joke when they come in here. I know they’re here to upset us. I like to watch them from afar. I need to put my best team on the mat.”

The key matchups on Friday night will be at 125 pounds, 141 pounds, and 149 pounds. We likely will not see Joe Smith, Preston Weigel, or Austin Schafer wrestle this weekend as the Cowboys gear up for the marquee dual against Penn State in the NWCA Bowl Series Championship and the Big 12 Tournament.

No. 11 Nick Piccininni has certainly had his ups and downs this season, but the talented freshman has proven his worth to the team with tech fall victories in the lions share of his matches since losing to top tanked Thomas Gilman of Iowa. Picc will wrestle No. 14 Drew Templeton of Wyoming on Friday to cement his seeding at the Big 12 tournament in Tulsa the first weekend of March.

The premier matchup of the night will be a rematch of the 141-pound NCAA finals from last season with No. 1 Dean Heil taking on No. 8 Bryce Meredith. Meredith went on a tear at NCAAs last season for an opportunity to take on the top-seeded Heil. Heil defeated Meredith with a 3-2 decision in a very hard fought match. Both wrestler have improved over the past year, so this match should be worth the price of admission for the Cowboy faithful.

No. 2 Anthony Collica will be taking on No. 19 Cole Mendenhall in the third and final ranked matchup of the night. These two wrestlers have history, and Collica has had the upper hand each time. While Mendenhall is a solid wrestler, he is no match for the Cowboy senior who recently joined the 100 win club.

The Bedlam dual is not much different than the Wyoming dual in terms of ranked matchups. With only three wrestlers in the top 20, the Sooners are looking to finish off a rough season with a strong finish. As with Bedlam football, there would be little sweeter than for the “little brother” to ruin the hopes of an undefeated season for their biggest rivals.

“I think we need to be a little looser as we approach this weekend. We need to kind of shake off (the idea of) an undefeated season a little bit. When you’re trying to be perfect, it doesn’t seem like it ever works,” coach Smith said, “I’d like to see us relax and compete at a high level. It’s Bedlam. It’s going to be a different match than what it was at the beginning of the year. They got a couple guys that are eligible and several wrestling well. I think it’s going to be a tough dual meet.”

In the 176th edition of Bedlam wrestling, nine Cowboy seniors will be honored for their contributions to OSU Wrestling. As PFB covered earlier this week, some of these guys never saw the mat in competition. Four seniors, however, have made great contributions to Cowboy wrestling and have been vital to the development of the program.

Nolan Boyd, a 100-match winner, is an Oklahoma native that proved that junior wrestling in Oklahoma is not dead and you can still get elite wrestlers out of the state. Anthony Collica has a realistic shot at capping his senior campaign with a run to the NCAA finals, and while Penn State superstar Zain Rutherford will likely be there waiting for him, Collica has proven that he can keeps things close with the notorious pinner. In the NCAA finals you never know what could happen.

Austin Schafer has also proven vital for the Cowboys in his senior campaign. His emergence as a legitimate All-American at Heavyweight gives Cowboy fans confidence that the Pokes can finish on top of the podium. Kyle Crutchmer is another Oklahoma native understands how big of a deal Bedlam is, and is excited to finish his career against the Sooners.

“In my career as a senior, having the things that I learned since being here, and being able to end it with Bedlam is going to be pretty cool,” said Crutchmer. “I have a lot of history, and a lot of my family is OU fans. My grandpa played football at OU. It’s going to be pretty surreal. I’m excited. Last year, it was pretty upsetting how my season ended.

“In this sport, there are going to be a lot of trials and tribulations you have to go through. Being able to wrestle another Bedlam, as a kid that’s something you dream of. I’m excited. They’re our rival, we don’t like them. They might not like us, but they respect us. To have senior night that night for my family, for my friends and my supporters, that’s a big deal for me.”