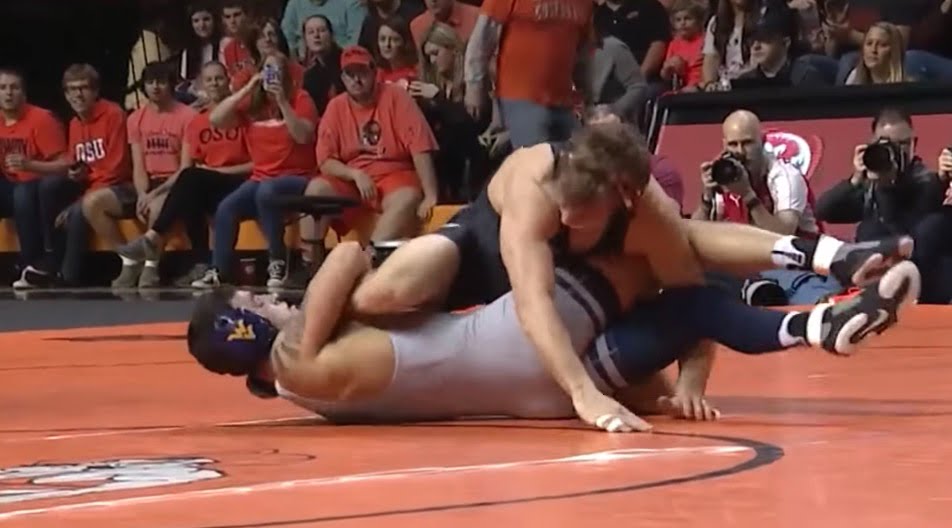 Oklahoma State took two more duals over the weekend by a combined score of 69-12. Here is a recap of the West Virginia and South Dakota State Ws.

Oklahoma State continued their undefeated season Friday night against West Virginia in dominating fashion. Five Cowboys wrestlers defeated their opponents with bonus points, and only one West Virginia wrestler, No. 6 Jake Smith, was able to win by decision against OSU backup Derek White.

Cowboy 125-pound freshman Nick Piccininni was able to redeem himself from a disappointing match against Thomas Gilman of Iowa by defeating his opponent from West Virginia by technical fall (when a wrestler captures the victory by gaining a 15+ point differential from his opponent) in the second period.

“It’s a little bit of pressure, but it’s definitely a pacesetter,” Piccininni said. “I’m looking to set the pace high. Not just for myself, but for the rest of the guys following behind me. It’s very important for me to start it off. Just go hard and feed the energy to my teammates and the crowd.”

Following Pic’s hot start, Kaid Brock tried to avoid the let down after the big win against No. 3 Corey Clark last Sunday awarded him conference and national honors, and is also being called the “match of the year” by some outlets. Brock was able to defeat WVU’s Cory Stainbrook, but left a bit to be desired from his coach.

Dean Heil and Anthony Collica both won their matches by major decision (when a wrestler wins by eight points or more) and continued their excellent seasons as the No. 1 and No. 2 wrestlers in their respective weight classes. It was also great to see Heil go out and score some bonus points for the team, something that the Pokes will need him to continue to do as he makes his way back to the NCAA finals.

At 157-pounds, No. 6 Joe Smith continues to look sluggish against his competition. In Smith’s freshman season last year, he was agressive and consistently looking for ways to score points against his opponents on his way to a seventh place finish at nationals. This season, Smith has looked sluggish since returning to the mat. Wether it is injury or he is cutting too much weight, it would be nice to see Joe win by more than a last minute takedown against unranked wrestlers moving forward, as the Cowboys need him to repeat his All-American performance from a year ago.

The match of the night took place at 165 as No. 6 Chandler Rogers took on No. 8 Dylan Cottrell. Rogers started the scoring with a takedown late in the first, and an early second period escape to take a 3-0 lead to the third period. After being docked a penalty point for locking his hands, Rogers was able to get two more points on a near fall against Cottrell and secure the win 6-4. Rogers continues to improve his standing in the national landscape, and as the season moves along he is proving to be a valuable scorer for the Cowboys.

Senior Kyle Crutchmer pinned his opponent within two minutes at 174 and Nolan Boyd followed up a very disappointing showing against Sammy Brooks of Iowa (who was pinned by Penn State’s Bo Nickal last night as the 184 pound weight class looks like a two-man race) by finishing a technical fall early in the second period after taking a 14-3 lead into the period. The win marked Boyd’s 99th as a Cowboy.

West Virginia’s lone win came at 197-pounds against Cowboy backup Derek White (who was the champion at the Reno Tournament of Champions in December). No. 6 Jacob Smith did not dominate this match by any means, only winning by decision 2-1. Preston Weigel did not wrestle for undisclosed reasons, but from speculation it seems that Cowboy coaches do not want to give Jake Smith two opportunities to figure out how to beat Weigel, as the two are sure to meet in the finals at the Big 12 tournament. In the NCAA tournament, the difference between a 3 seed and an 8 seed are significant, and with Weigel being ranked No. 4, he has a bit more to lose than White.

OSU’s small heavyweight Austin Schafer continues to wrestle anything but as we defeated his opponent 16-0 and was awarded a tech fall.

If this is the farthest that the Cowboys fall from grace this season, then there will be a lot of happy Oklahoma State fans on the evening of March 18th. Oklahoma State was able to maintain their undefeated season on Sunday afternoon as they handily defeated the Jackrabbits of South Dakota State. Five Cowboy grapples won with bonus point victories, but three Cowboys ranked in the top five of their respective weight class were defeated by their opponents.

“South Dakota State wrestles hard and they wrestle tough,” head coach John Smith said. “We got tested in a few different matches…There were a lot of things from this match that were good, but also several that we’ve got to correct.”

At 125 pounds, Nick Piccininni followed up his tech fall victory on Friday night with another tech fall victory on Sunday. After scoring a takedown and turning his opponent to his back to score near fall points twice in the first period, Picc was able to close out the match 47 seconds into the second period. Since losing to Thomas Gilman of Iowa, it seems that Picc wants to prove that he belongs in the conversation as one of the best in the country. Watching him develop will be exciting for Cowboy fans as the year progesses.

Second-ranked Kaid Brock did not fare as well against his opponent from South Dakota State. No. 7 Seth Gross has been having an incredible freshman season so far, and many pointed to this match against Brock as his opportunity to show that he belongs in the conversation as one of the best in the country. Gross beat him 6-4.

Unfortunately for Brock, Gross is very similar to OSU’s Preston Weigel in that he is absolutely dominant in the top position, and it is close to impossible for his opponents to escape his grip. Brock is an excellent wrestler on his feet, and learned the hard way on Sunday that sometimes you need to skip the escape point in favor of choosing the neutral position in between periods. Fortunately for Brock, he will have an opportunity to redeem himself at the Big 12 Tournament in Tulsa. In this writer’s opinion, losing a match like this is good for a young wrestler because it teaches him that he is not invincible… similar to when Bane broke Batman’s spine.

Top-ranked Dean Heil produced a similar result as he did on Friday night against West Virginia, notching a major decision over his opponent after getting a couple of takedowns and scoring back points in the match. As has been stated, a key to the Cowboys NCAA hopes is for Dean Heil to pick up bonus points in the first rounds of NCAAs. This is not something that he is exceptional at but seems to be working on.

Anthony Collica followed up his victory by pin on Friday with a 23-8 tech fall on Sunday. The Cowboy senior has made enormous strides this season and is comfortable in his No. 2 ranking. No. 1 Zain Retherford of Penn State is the odds on favorite to win the 149 weight class at NCAAs, but Brandon Sorenson of Iowa, who Collica defeated in overtime, made Retherford look human on Friday night in the Penn State-Iowa dual. If Retherford-Collica ends up being the match in the finals, it may be one that we talk about for years.

Joe Smith and Chandler Rogers both handled their opponents with decision wins. Rogers typically looks for the pin, but could not get SDSU’s Luke Zilverberg to his back this time around. Smith looked like he had more energy in this match, so fingers crossed that the Cowboy can keep this momentum going and peak in March.

No. 5 Kyle Crutchmer went back to early-season-Crutchmer as he took a gamble early in the match, and his opponent, No. 20 David Kocer, made him pay by racking up six takedown and nearfall points. Crutchmer wrestled aggressively in the second and third periods, but unfortunately could not come back from the hole that he put himself in early.

No. 6 Nolan Boyd picked up his 100th win in his Oklahoma State career by picking up the 18-2 technical fall over Martin Mueller. Boyd becomes the 40th Cowboy wrestler to pass the century mark in his career at OSU.

“It felt great,” Boyd said of getting his 100th win. “I felt a little bit of pressure. There’s always a negative thought you have to fight off, and I think that’s what it is was; just fighting off the negative thought, being positive and taking these matches as opportunities.”

No. 4 Preston Weigel was the other Cowboy that disappointed on Sunday afternoon as his lack of ability from his feet caught up with him against No. 8 Nate Rotert. Weigel is a dominant wrestler from the top position and in scrambles, and when he is not able to get into that position he struggles. Rotert never gave Weigel the opportunity to be on top, and when Weigel was hit with a stalling penalty it shook his game plan for the match. Ending in overtime with a Rotert takedown in Sudden Victory. Again, Weigel will be able to redeem himself at the Big 12 Tournament.

No. 7 Austin Schafer capped off the night with a pin over his opponent. Schafer has been pretty dominant this season, and has been a great surprise for the Cowboys so far, bursting onto the scene by defeating Michael Krolls of Minnesota and his only loss on the season coming to Jacob Casper of Duke. Of his 16 victories this year, 9 have been bonus point victories. With continued improvement, Schafer could prove to be a force at NCAAs in March. The favorite in this weight class won a gold medal in Rio, so I will not expect him to win the title in the weight, but finishing top 4 and racking up some bonus points on his way would be an incredible production from the Cowboy heavyweight.

The Cowboys will hit the road this coming weekend with a Friday night matchup with former Big 12 foe No. 8 Mizzou, and a Sunday afternoon dual with Iowa State, who is having a rough season. The main match to watch on Friday will be to see how Preston Weigel responds to his loss with an opportunity to take on No. 1 J’Den Cox, the defending national champion who won a gold medal in Rio back in August.