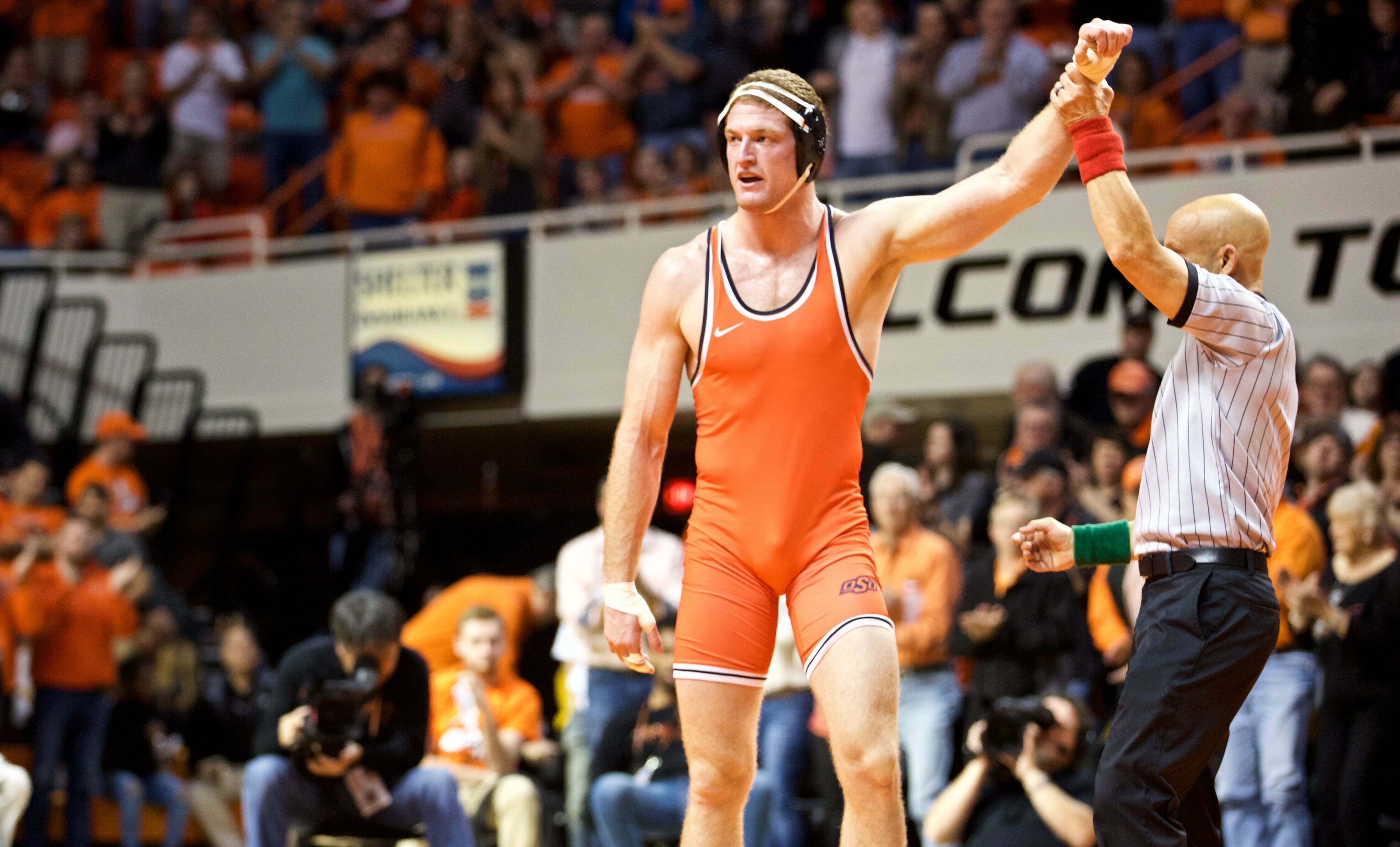 Oklahoma State wrestling finished the 2016-2017 season in dominating fashion this weekend to cap off their first undefeated season since 2005. The Cowboys exerted their dominance against both opponents, defeating Wyoming 32-3 on Friday and Oklahoma 37-3 on Sunday.

In Friday night’s hot Cowboy on Cowboy action, Nick Piccininni and Kaid Brock got the action started early with a big decision and major decision. Nolan Boyd and Preston Weigel finished the action with back-to-back technical falls. Wyoming decided to sit their ranked wrestler at 125-pounds, leaving Piccininni to wrestle the backup that he had not prepared for. Chandler Rogers took on one of the two ranked wrestlers at 165, picking up the 10-6 decision.

The marquee match of the night was at 141-pounds, a rematch of the 2016 championship match between No. 1 Dean Heil and No. 8 Bryce Meredith.

“Meredith, whether he’s ranked eighth, second or whatever, he’s a good guy, and I expect to see him at nationals again this year, and I’ll see him again at Big 12s.” Heil said after the match. “I have a lot of respect for him. He’s one of those wrestlers that likes to put me in positions that most wrestlers don’t, and I give him a lot of credit for that. He came out and wrestled tough, and it was a good match.”

Heil expressed that Meredith changes up the way that he wrestles every match, so he is tough to prepare for which explains the scoreless first period. In the second, however, Heil was able to get the action started quickly with a takedown and with his tough defense was able to hold Meredith off for the remainder of the match and pick up the win.

In the 176th edition of Bedlam, the depth of the Cowboys proved far too much to handle for the Sooners. For the first time in the last few duals we saw nine out of 10 Cowboys starters in action, including No. 6 Joe Smith.

Piccininni started things off with a decision win over Christian Moody at 125 pounds. Kaid Brock picked up his first technical fall victory of the season over Jacob Rubio. Dean Heil continued the hot start with a 5-3 decision victory over Mike Longo to put the Cowboys up 11-0.

The fireworks started at 149 with No. 2 Anthony Collica taking on No. 13 Davon Jeffries. Collica collected a quick takedown in the first and proceeded to collect four more throughout the match on his way to a 12-3 Major Decision victory. After the match, Jeffries took offense to a slight shove by Collica and proceeded to retaliate, which fired up the crowd at Gallagher-Iba and cost the Sooners a team point.

In his first action since the Missouri match, Cowboy sophomore Joe Smith took the match for the Bedlam dual. As it turns out, the problem with Smith for a portion of this season has been that he has been dealing with bursitis in his knee. After having the knee drained, Smith has not been able to get back up to 100 percent. But after taking some time off and working with volunteer coach Chris Perry, Smith looks like he has returned to form just in time for the NWCA dual series championship next week, the Big 12 tournament, and the NCAA tournament.

Smith picked up the technical fall over Joe Schieber, and looked great in the process by attacking from his feet and turning his opponent over.

“It was good,” John Smith said. “I thought he was a little slow in getting back into it, letting (Schieber) know that he can wrestle hard. When you have the injury he’s had, you’re a little bit timid because he’s healed it up and it gets hurt again, he heals it up and it gets hurt again. It was good to see him break out of it and let it fly. His knee is in pretty good shape and we’ll continue to protect it, but I’m pleased with him and it was a good tech fall for him.”

At 165 pounds, Chandler Rogers completely dominated No. 10 Yoanse Mejias (an all name team member, for sure) and picked up the pin in the third period.

Kyle Crutchmer, Nolan Boyd, and Preston Weigel all picked up wins to separate the match from the Sooners, who only picked up the win at heavyweight with a major decision.

Next Sunday, No. 1 Oklahoma State will take on No. 2 Penn State in the NWCA Dual National Championship in Gallagher-Iba Arena. This crucial dual will give Cowboy fans the opportunity to show exactly how they match up with Nittany Lions.

“I think (looking ahead to Penn State) put a little bit more pressure on our team…If something would have happened and we would have lost a dual meet, I’m not sure we would have been in the championship. A lot of the teams we’ve wrestled up to this point have been solid teams, but this one that is coming in next week is quite different,” Coach Smith said after Bedlam.

“There isn’t any question we’ll have to have our best outing to win…We’ll see where it ends up. I’m excited about it, and I’m excited that we got back to it. There’s a lot of talent on Penn State’s team and if we show anything less than our best performance, it will be a tough day for us.”

This is a huge match, and everybody at Pistols Firing Blog would be fired up if the Cowboy faithful could fill the gym for this one. Tickets can be purchased here.