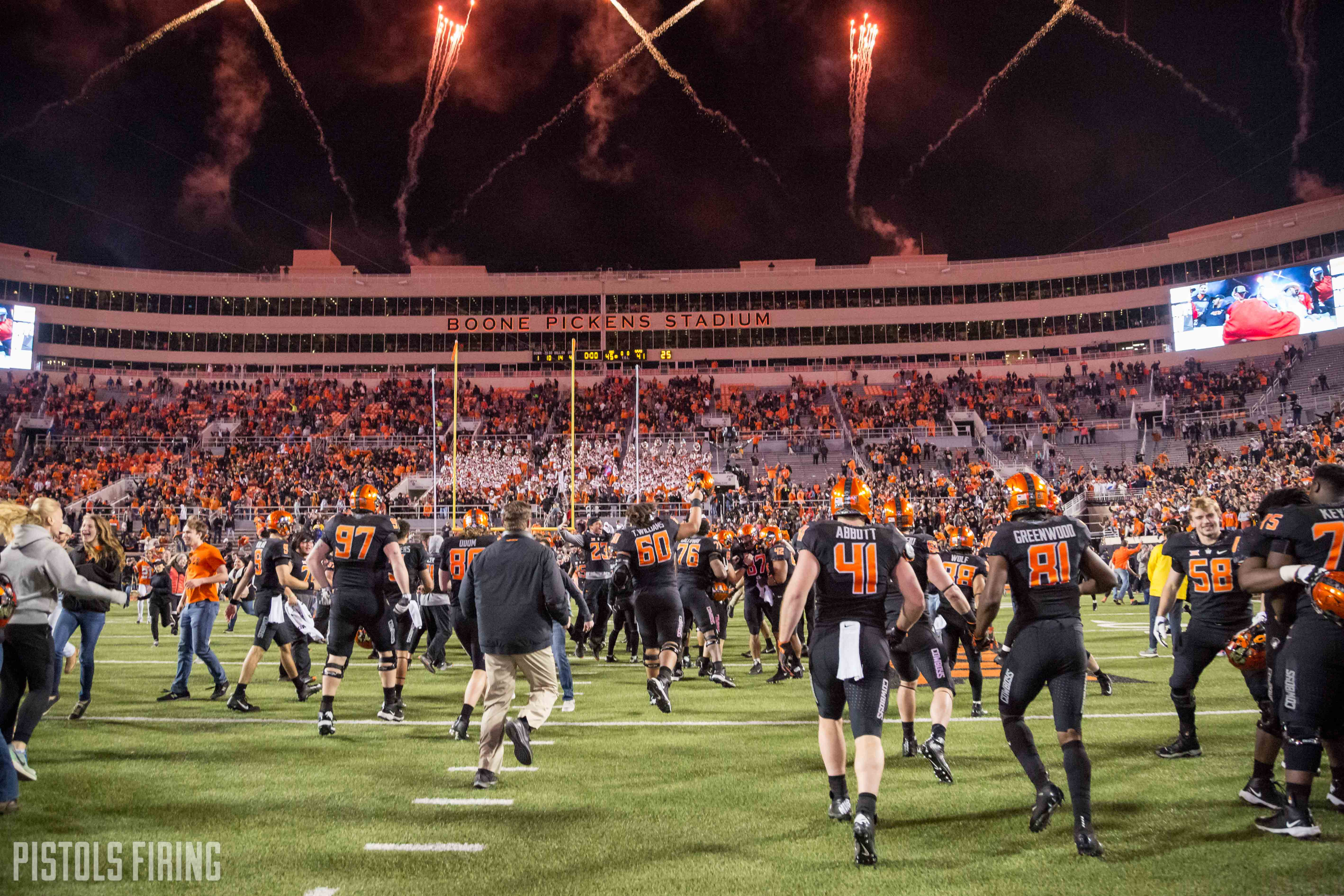 When A.J. Green batted down a prayer-fueled ball in the end zone as time expired, West Virginia’s hopes of a College Football Playoff bid were snuffed out. But in that one swift motion, Oklahoma State’s flickering top-10 bowl streak was fanned back to life.

With their dramatic 45-41 comeback win over West Virginia, Oklahoma State not only completed its second top 10 win of the season, it also punched its ticked to the postseason for the 13th-straight time.

Bowl games are about more than pomp and circumstance. They’re a point of pride for 70 or so college athletes who want all of their expelled blood, sweat and tears to mean something at the end of the season. The fact that OSU’s bowl eligibility was secured on senior night, for a handful of leaders that would otherwise be one week away from the end of their careers, makes it all the more sweet.

“It’s super important for the development of your program,” said Mike Yurcich after the game. “The biggest thing is our guys deserved to win. With what they put forward and what they put forth effort-wise, it’s a tremendous feeling to know that your players are now being rewarded that bowl game.”

The Cowboys, owners of one of the 10 longest active bowl streaks in college football, have now penciled themselves in for lucky No. 13. Here’s a look at where they stand, as well as a couple of teams still in jeopardy.

Florida State beat No. 22 Boston College so they will have to win at No. 15 Florida to reach six wins. Virginia Tech got drummed 38-14 by Miami so they are all but sure to see their 25-year streak come to an end.

Taylor Cornelius played heel then hero on Saturday, throwing for 338 yards and five TDs, while also running for a sixth. But he did throw two interceptions and was pretty close to making that four.

The five-year man whose public perception swings from fan favorite to program scapegoat at the snap of a football is just happy that the apparently inevitable has been cemented.

“It’s very nice,” Cornelius said. “We knew we were going to have it, but it’s nice to have it locked in now.”

If 2014 was an up-and-down season, 2018 was more of the up-then-down-then-up-then-down variety. Big wins against ranked opponents like the ones OSU earned against Boise State, Texas and now West Virginia, would have turned Mason Rudolph into a Heisman finalist and would have reserved OSU a seat at the 2017 Big 12 Championship table in Arlington.

Unfortunately the same year those ranked wins occurred, the Cowboys dropped games to Texas Tech and Iowa State at home and brought home bad Ls from Manhattan and Waco.

But for now, it’s nice for the Cowboys to know that their season has been extended. It will serve as a nice send-off to some grizzled vets, and serve as some extra seasoning for the younger players that will fill out several openings on the roster come 2019.