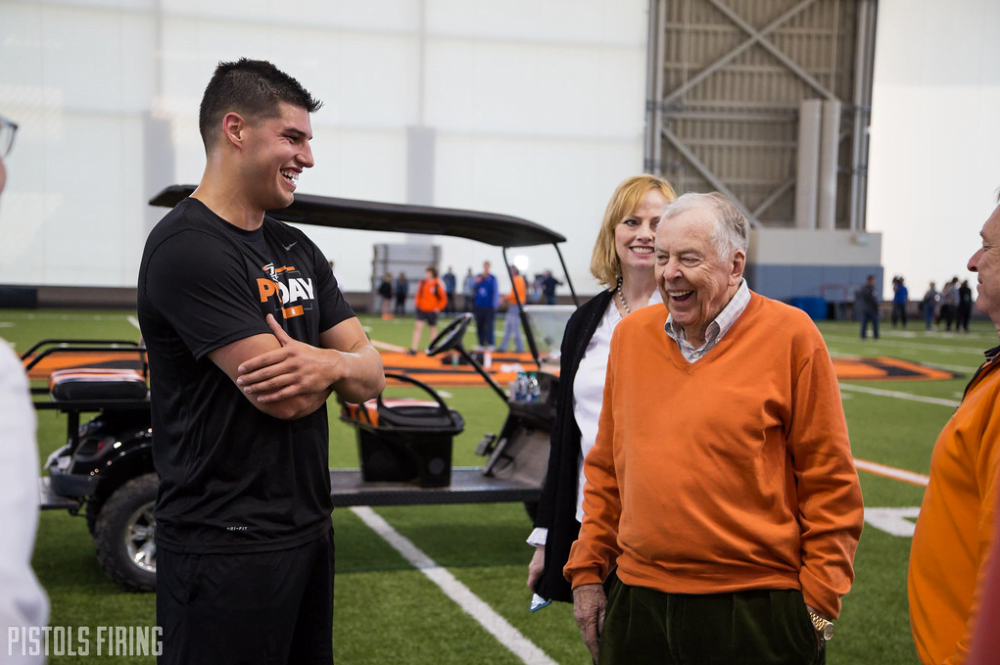 Oil baron T. Boone Pickens, a 1951 Oklahoma A&M graduate who later became Oklahoma State football’s biggest donor, passed away Wednesday in Dallas, Texas. His legacy and impact on the football program and the university will forever be remembered, as will his kind spirit and one-of-a-kind personality.

Over the years, Pickens displayed that magnetic charisma at media outings, public speaking appearances, and even on social media, where his sense of humor flourished, opening a window to his soul. You could write a book on some of his Instagram posts, which range from videos of him running up hills to memes of him working out to him doing pushups while army men held him upright. Come to think of it, he was a bit of a fitness junkie!

He had his serious moments, too, where he revealed his brilliance to the public. We’ve compiled some of the best quotes from a little of both sides of him over the years.

No. 1 on the list, No. 1 in my heart, this video perhaps best represents Boone better than any other quote on this list. In 2014, he challenged sitting president Barack Obama to a fitness competition, a video that included him running hills and issuing this statement:

“I challenge President Barack Obama to a 1 hour workout. My cardio is better. Will work out energy plan for America. #nosweat“

I challenge President @BarackObama to a 1 hour workout. My cardio is better. Will work out energy plan for America. #nosweat

On fitness, Pickens once said, “When you are young, fitness is a sport. As you grow older, it’s a necessity.”

“I would like to beat OU. Mike has struggled with that game. I think he’s 2-9, so we’re not competitive with OU. By golly, we beat Texas. We’re the only team that has beaten Texas four in a row in Austin. If we can beat Texas, we sure ought to beat OU.”

3. On the First Billion

The Drake-Boone exchange on Twitter came in the earlier years of social when stuff like this was still shocking and amazing. It stands the (short) test of time.

“A plan without action is not a plan. It’s a speech.”

“A fool with a plan can outsmart a genius with no plan.”

“Be willing to make decisions. That’s the most important quality in a good leader. Don’t fall victim to what I call the “ready-aim-aim-aim-aim” syndrome. You must be willing to fire.”

“The older I get, the more I see a straight path where I want to go. If you’re going to hunt elephants, don’t get off the trail for a rabbit.”

Last year before the start of the football season, Boone, true to form, issued what his people call a “Boone-ism.” In a semi-serious quote about confidence in Gundy and the OSU football program, he ended it with, well ….

Remember when Boone tried to end an entire publication with a single tweet?

.@SInow The higher the monkey climbs the tree the more people can see its ass. You climbed far up the tree on #okstate.

“Keep things informal. Talking is the natural way to do business. Writing is great for keeping records and putting down details, but talk generates ideas. Great things come from our luncheon meetings, which consist of a sandwich, a cup of soup, and a good idea or two. No martinis.”

Here’s what Pickens said after that remarkable Baker-Justice 2017 Bedlam game in Stillwater. We thought it was a good one for today.

Love direction #okstate football is heading. Best is yet to come.

The best is yet to come …