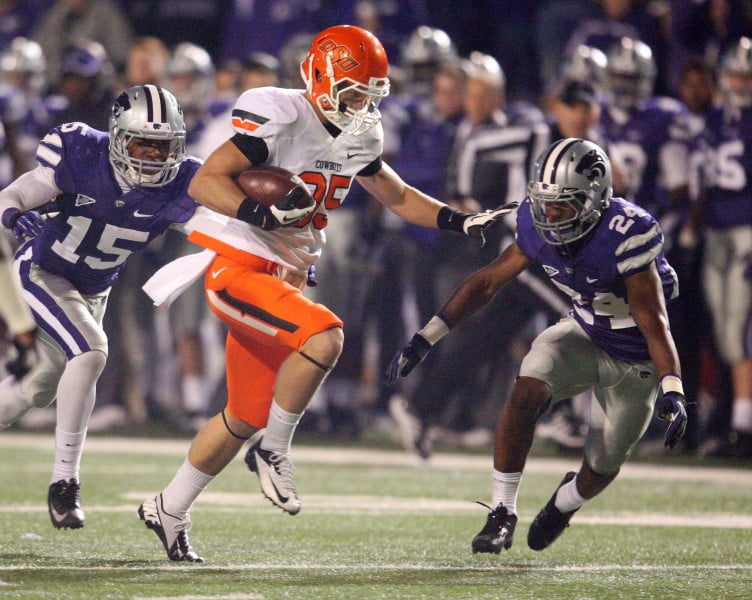 1. Kansas State is boring and I think they like it that way. Outside of the Lockett kick return they did absolutely nothing to entertain me outside of showing the crazy guy in the stands wearing the Klein jersey with American flags sticking out of his sunglasses (it’s 8 PM, bro). That’s their M.O. though and it might just get them to the national title game.

2. OSU brass must have suggested Windows 8 as a sponsor for this game because all I wanted to do all game was hit control-alt-delete.

3. Anybody know why Brent was so obsessed with showing off the Kansas State crowd? I mean I know they’re great but he was setting them up like they were the ’92 Dream Team of crowds. “Listen guys, listen to this…” [crowd cheers] Oh, it sounds like a Saturday night college football crowd…cool.

4. In 27 years of punt return fan angst there’s one thought that never crossed my mind: “let’s put another guy back there to try and simplify things, that will totally make me feel better.”

5. I wrote on Saturday that the defense was terrific. That might have been a little bit strong but I still think they did an outstanding job of batting down balls at the line, forcing Klein to the outside, and taking care of business. Consider Kansas State’s 13 drives: Punt | TD | FG | TD | Punt | Punt | Half | TD | Punt | FG | FG | Missed FG | Half. K-State came in averaging over four points a drive and OSU held them to 2.3.

6. As I was watching the Heisman trophy commercial — the one with Bob Griffin trimming the hedges — all I could think was “where do I bet all my money Mark Ingram doesn’t drive a Nissan?”

7. How scary is Joe Randle and Arthur Brown on the same high school track relay team?

8. If you had “Desmond Roland will return a kick before Justin Gilbert this year” in your office pool, congratulations.

9. One last great line from Brent: “Tyler Lockett of the famous Lockett family scored a touchdown!” Are they the Kennedys of the midwest or did I miss something here?

10. One play that got way understated was the second pick of Lunt where Zimmerman and Chapman both came down with it on the sidelines. Zimmerman had possession until Chapman fell out of bounds and they somehow awarded it to Chapman even though he never had the ball in bounds!

Would it have made a difference in the outcome? Probably not, but it was a patricularly odd call nonetheless. Of course Brent and Herbs thought they gave it to Zimmerman. Actually they probably thought the refs gave it to Barkevious Mingo then just randomly picked somebody on the KSU roster to call out.

All in all a rough weekend for OSU but back at it this week with crazy Dana’s return to Stillwater and I could not be more excited.