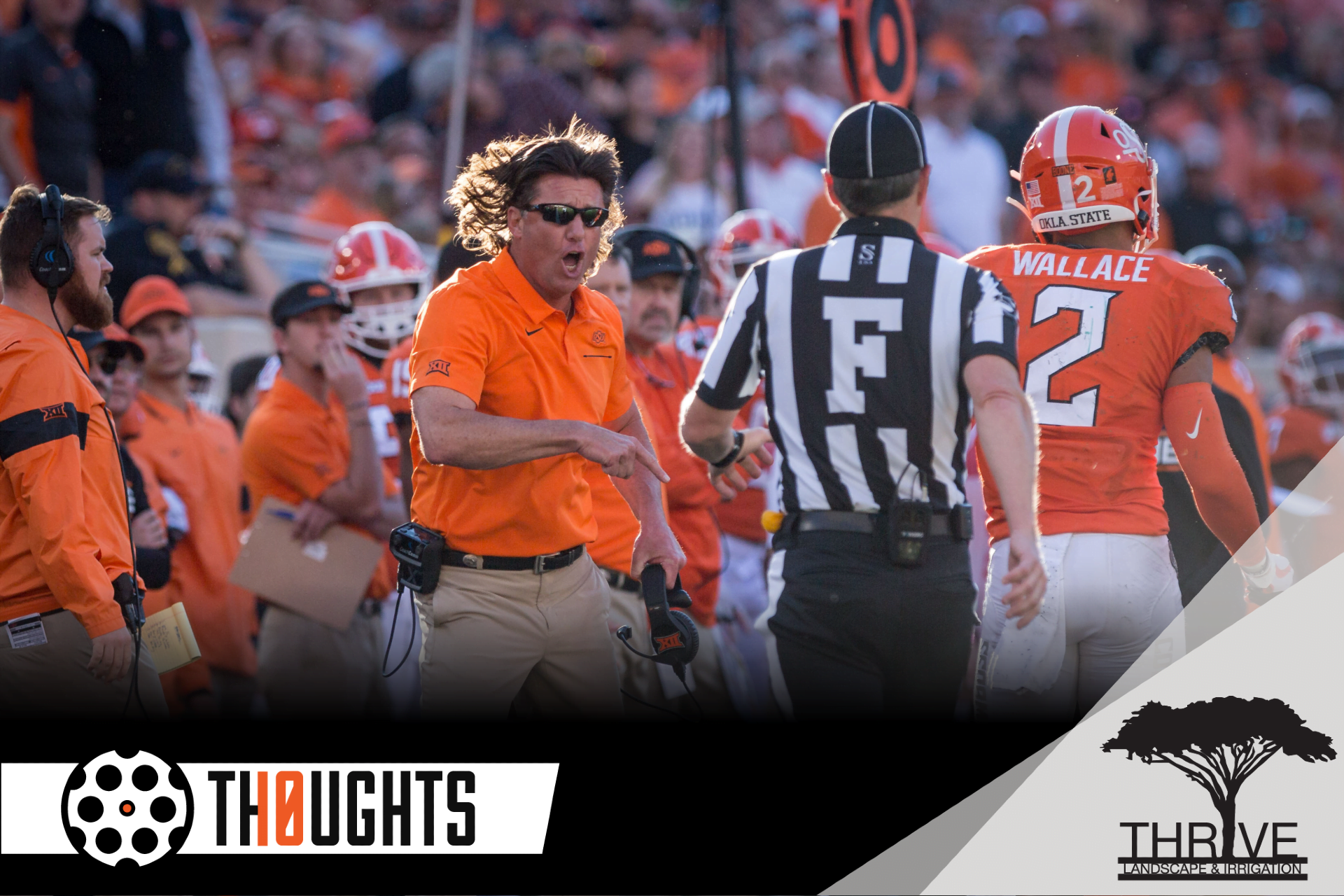 I did not know how to begin this one. Normally it’s easy. My grandfather once asked me if I get writer’s block. I told him, “No, I just write and whatever comes out I go with.” I just open up a vein and let it flow. I always presumed that was more about me than the material I had to work with. I may have been wrong about that because I’m still sitting here not knowing how to begin this one.

Oklahoma State lost to Baylor 45-27 in Stillwater on Saturday, and what for a bit seemed like it would be yet another thrilling Big 12 mid-October slugfest, turned ugly late as Baylor delivered a TKO and then jumped on top of the body just because they could.

For the Pokes, the usual suspects led the way offensively. Chuba Hubbard had 171 and a pair on 32 carries. Spencer Sanders threw it for 157 yards and a TD but had three more turnovers. Tylan Wallace was mostly stymied and had 69 of OSU’s 188 receiving yards.

Defensively OSU held the fort early, and then the fort was stormed with bows and arrows dipped in fire and a catapult that kept flinging boulders the size of houses over the edge of its walls. Baylor scored TDs on five of its last six real drives and notched 9.9 yards per play, the second-most given up in a single game in the Gundy era.

We’ll get to my briefer-than-usual 10 thoughts in a bit, but first a shout out to our friends at Thrive Landscape and Irrigation. If your lawn or landscape is as big of a mess as this OSU team right, they can help you out. Check ’em right here.

I’ve been a defender of the following three people or entities for as long as they’ve existed in our world. The justification was always that you didn’t understand what was happening if you only quickly glanced or didn’t submerge yourself in this world. But with the trajectory of this season — and specifically this game — these three are making it really tough to defend them and their futures.

• Spencer Sanders — Listen, I’m going down with the ship. Whether it turns over or sails sweetly the next three years, I’ll be on it. And there were flashes on Saturday. He was particularly thoughtful and good in the first half with a lot of his check-downs and tosses to Jelani (everything we’ve been asking for!). But boy, the turnovers are really, really bad. I don’t really know what your alternative is at this point, but I’m currently struggling to see the light at the end of this tunnel.

• OSU’s defense — I had a 1000-word thesis prepped for the jury after what I thought was a terrific first half. A third-down defense that gets off the field! Pressure on a good QB! Even a turnover! Then they gave up nearly five points a drive (!) in the second half (not including the fumble return of course), and nearly allowed the single least-efficient game of the Gundy era to a Baylor team that good but not great when it comes to offensive efficiency. They also allowed 12 (!!) yards per play on first down and for the first time in the Gundy era allowed a team to throw for 300+ on them on fewer than 20 attempts.

Sure, they had more sacks and TFLs than Baylor, but when you leave the middle of the field more barren than a field off the side of I-35, the efficiency numbers take a dent.

• Mike Gundy — Of course all of this leads to Gundy (and I’ll get deeper into the numbers on some of this below), but OSU is at a pretty interesting point with him. As Carson pointed out here, OSU is 10-12 (and actually 10-13 if you want to tack on the 2016 OU game) in its last 22 Big 12 games. That doesn’t meet the standard that Gundy set for himself, and a turning tide within OSU’s fan base could become a tsunami depending on how the rest of this year goes.

The offensive line has gotten … worse? Sanders was running for his life on every other play it seemed in the first half. There have been times they’ve been terrific, but too often this season there have been too many plays where the floodgates opened up.

This one from the first half is emblematic of what I’m talking about. Sanders snaps it at 1:40, the OL gets obliterated, and he’s running for cover by 1:38. The stuff at 1:37 is just a horror show. 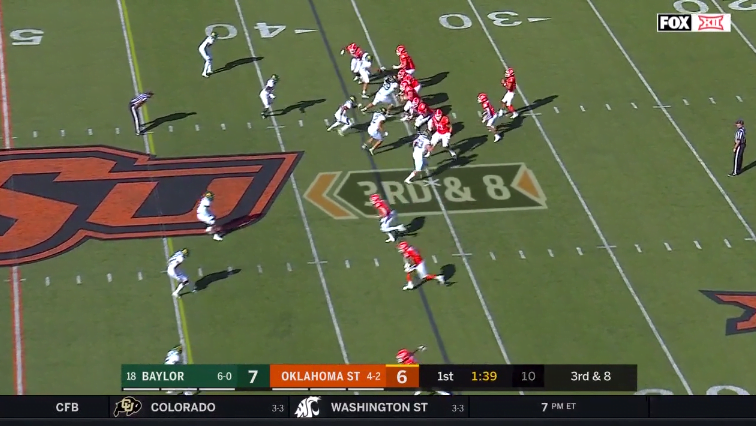 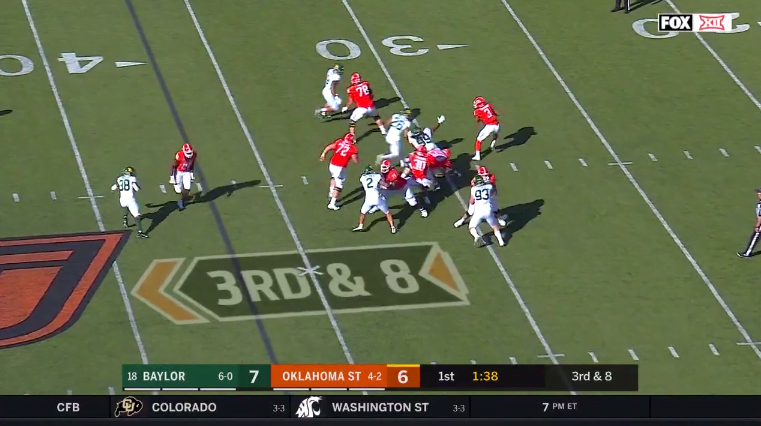 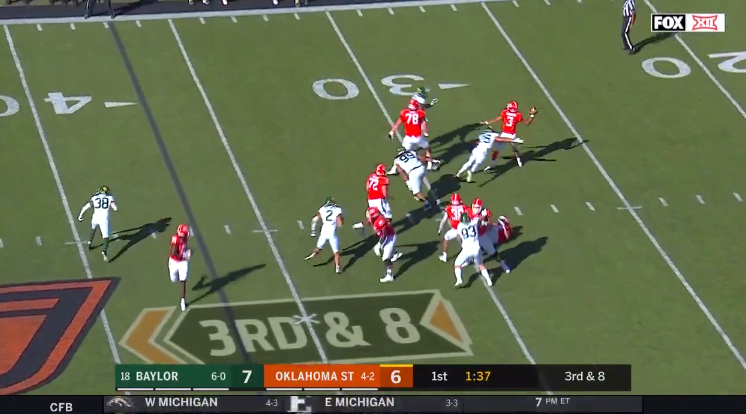 Injuries happen, shuffling around happens. I don’t know which came first, but as OSU has faded, its offensive front has faded as well. Or maybe it’s the other way around.

How do you put up 9.9 (!!!) yards per play on this OSU defense? That’s a first down every time you snap the thing! As the broadcast pointed out, you hit big on five big plays and the rest is gravy. Here were Baylor’s five big plays (four passing and one rushing).

That’s 322 yards on five plays. The other 49 plays resulted in just 214 yards. But because OSU got chunked so hard, it resulted in — like I said — the second-least efficient defensive performance in the Gundy era even though only two teams (Kansas State in 2006 and South Alabama in 2017) have ever run fewer plays in a single game in the Gundy era than Baylor did on Saturday (54).

Here are the five worst YPP games in the Gundy era (Baylor will slot in at No. 2 when this is updated on Sunday). OSU is now 2-16 when giving up more than 7.3 YPP.

Let’s talk about something positive! LD took a 68-yarder to the house in the second half. It would have been less surprising to me had Mike Boynton put on a squirrel suit and flown in circles over the stadium with a banner that read “STILLWATER > NORMAN BRYCE” at halftime than LD going 68 for a score.

The best (funniest) part? He hit that track star finish at the goal line like he was Tyreek!

Good for that dude.

This one is tough to look at, but OSU is now 7-6 as a home favorite in the last three seasons. We can talk about all the different numbers and data and statistics, but that to me is the biggest indictment of Gundy, the program and its trajectory.

If you’re a good team, you win games you should win at home. You just do. Sure, there are upsets. There are also games you’re favored by three in that you go on to lose that are sorta-but-not-really upsets. But not like this. Not 7-6 in the last three years. Not in the manner OSU has lost them. Not when you were 48-6 as a home favorite from 2005-2016.

With 171 he’s at 1,265 and up to the 17th-best season in OSU history with six (five??) games to go. He passed Keith Toston’s senior year, Joe Randle’s sophomore year and Justice Hill’s freshman year on Saturday.

I hope he plays the duration, but I understand if he doesn’t. I guess the thing that struck me on Saturday as I watched him rock it 32 more times against a pretty good Baylor defense is how much fun he is to watch run. A lot of OSU’s offense is not much fun to watch — as noted in The Chamber during the game — but his around-the-end gallops are (and always will be) breathtaking. Appreciate these last few from him.

Here were a few other ? numbers.

This begs another point I’ve been wanting to make …

I think guys like Matt Rhule are pretty simply hungrier to build and maintain a good program than Gundy is right now. There are a lot of Matt Rhules in the league, too. The hardest thing in the world is staying atop the mountain once you’ve summited it, and we’re seeing the effects of that with Gundy over the last few years. That’s not a hot take after one bad quarter on Saturday but rather three years’ worth of evidence out of Stillwater.

The primary evidence of this on Saturday was in the way Baylor’s secondary defended OSU’s passing game. Dudes were in dudes’ faces. The aggressiveness there was palpable, and maybe it’s a little armchair quarterback-y of me to say this after a loss, but they just looked like a confident team that was going to play with swagger, win or lose. When’s the last time we could say that about OSU?

I guess this is a positive because I don’t remember Sanders targeting his receivers with this much diversity so far this season. Here are the numbers. 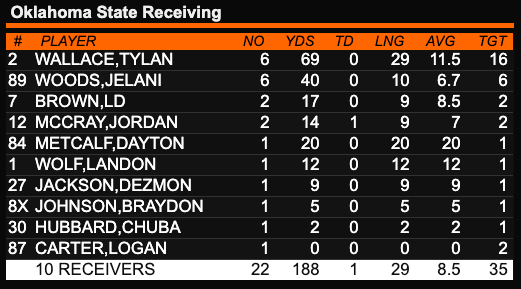 I think I said the sentence, “You could win the SEC with McCray and Braydon Johnson as your top two receivers” at some point on Saturday — which was a bit much — but I really like a lot of the guys Sanders has to throw to.

OSU is an average team, and that’s probably generous. Tough to write, tougher to read. But when you don’t do any of the things — little or big — well and when your skill at the positions that can potentially cover up your lack of recruiting well is not performing well enough to cover up that recruiting and when it rarely seems like you’re hungry as an organization or focused as a group, that’s how it has to go.

Gundy and OSU have lost the thing that’s maybe the very hardest to earn back. Beyond all the winning and spoils that have come with this 15-year mega-run from the best coach in OSU history, the thing he’s fought for has slipped through his fingers. OSU has been defeated in three different games this year, but more important than that, they’ve lost the benefit of the doubt from this point forward into the future.