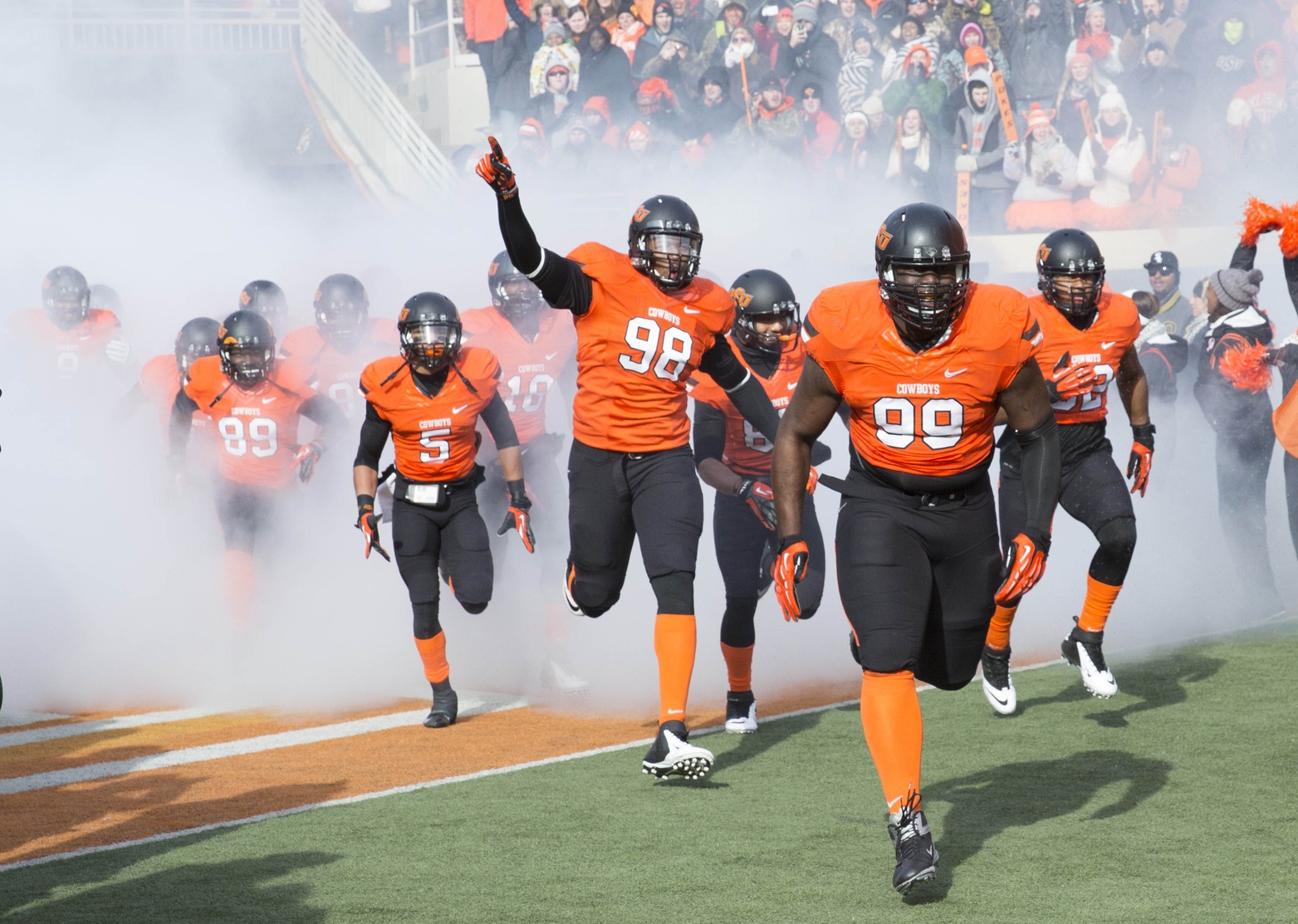 I don’t know how else to say this so I’ll be forthright:

How else do you explain the winningest coach in the history of Oklahoma State having a worse winning percentage against OU than all of his predecessors combined?

Somebody on Twitter said it quite well when he said that Stoops is the king of mediocre 10-2 seasons. He takes your jabs and your critiques and takes three QBs who couldn’t even play backup on 80 percent of his teams and goes out and beats an 11-point favorite in its own house with the Big 12 title on the line.

OSU was clearly the better the team in Bedlam today. That was obvious from Desmond Roland’s first 74-yard run that was called back because of a penalty. And if you don’t believe me ask the guy dialing up fake field goals and running trick plays in a one-possession game.

OU went 59 minutes and 41 seconds without a true offensive score before Blake Ball found Jalen Saunders in the northwest corner of Boone’s house for the dagger. A punt return, a fake FG, and two regular field goals kept OU hanging around until then.

It wasn’t Sooner Magic but it sure felt like sleight of hand at the highest level.

Not that OSU played all that great, either. Chelf had a pretty Chelf-y day — 19/35 for 202, one and one — but wasn’t himself until the final drive.

Oh, that’s fine, we have the best defense in the Big 12 and OU’s on its third (or fourth, depending on how you look at it) QB. Wait, Glenn Spencer running prevent defense with a buck forty left in Bedlam? That sounds like the worst decision ever.

It was. A couple of passes and a Justin Gilbert drop for the ages later and somehow OSU and OU ended 2013 with the exact same record.

It wasn’t because of a specific playcall or even a botched timeout or personnel decision. It’s just an overall indictment of the two coaches.

And I think I’ll OKC Dave take the ending:

On to the rest of my thoughts…

1. This was just utterly crushing. Partly because OSU was clearly better, partly because it was for the Big 12 title, and partly because time and time again the Cowboys could (and probably should) have put the game away. It was the most devastating Bedlam loss of the Gundy Era.

Here’s my quick short list (and I know I shouldn’t have 2004 on there but I’ll leave it because Gundy was the OC):

Most crushing Bedlam losses of Gundy Era, in order:

2. One thing that always gets blown way out of proportion on Twitter is the officiating. The refs were awful, yes, but when they’re that bad it’s almost impossible for them to favor one team.

OU got some horrific spots and probably a pass interference or two that was missed. OSU got the block in the back and a couple of obvious holds (the Vine below being one) that didn’t go its way but let’s not act like either team actually got hosed.

Also, the Gilbert pick wasn’t a pick but Gundy saying “I didn’t challenge it because I didn’t think I would win it” seems like the apex of arrogance as a coach. There are 25 seconds left, who cares, challenge it!

3. One sneaky subplot of this game is that it wasn’t really that great until the fourth quarter. The first 45 minutes were marred by below average QB play, tons of penalties, and way too many punts for my liking.

But man, that ending.

It was a lot like the 2013 Masters in that regard. Boring, bad, boring, semi-boring, HOLY CRAP IS THIS REAL LIFE AM I WATCHING ACUTAL THINGS THAT ARE HAPPENING RIGHT NOW WHERE DID THIS SPIRIT DREAM COME FROM?!

So, there was that.

4. The weirdest part of the game to me was how it never really felt in doubt as an OSU fan until OU finally took its first Bedlam lead in regulation since 2010 with 10 minutes left.

Maybe I let my guard down or maybe I just wasn’t impressed by OU’s offense but I texted a friend in the third and said “I feel really confident about this game” even though OSU was only up 17-10 at the time.

The other weird thing is that I think if Trevor Knight hadn’t gotten injured OSU probably would have won. The strange advantage you have of not having a QB is that you get to go to whoever gets hot in any given game. There’s no loyalty card. So you can go from Thompson to Bell and back to Thompson to Hunnicutt and back to Bell finally and nobody cares. Usually that doesn’t work but in a crazy game like this I guess it does.

5. The two coaching decisions that left me most perplexed: Gundy not calling timeouts at the end of the first half with two minutes left as OU was trying to punch it in. It’s not like they’re going to come down to the gun with it — preserve some time so you can maybe get in field goal range before halftime.

After the 99-yard drive that was heavy on the run OSU came back in the next drive and went pass-pass-pass-punt. Maybe something flipped and Yurcich was trying to exploit it but it was questionable at the time. To say the least.

6. The cold made Desmond Roland look like he was trying to score Fat Guy Touchdowns all day instead of trying to score Mike Alstott touchdowns. He has to be one of the slowest RBs in OSU history. As somebody on Twitter said, he’s a patient runner because he kind of has to be.

Also, I wasn’t at the game but you could tell how cold it was on the TV screen. You know how the Big 10 game comes on after GameDay and you accidentally watch 10 seconds of it because you forgot to change the channel and it looks like the cameras are frozen and everyone wants to die? That’s how today in Stillwater looked.

7. I believe it was the northwest endzone portion of the stands that lost its collective mind at the end of the game — throwing stuff on the field (including the famous kid’s turkey leg!!) and I’m certainly not a proponent of this.

But let’s not act like there was a murder committed.

This is incorrect. No beer bottles on field. Also don't sell beer at BPS. “@DeanBlevins: Some fans throw beer bottles at players”

And as OSU fans let’s not act like this is shocking. Kids gonna kids — especially after a super emotional loss. Everybody just needs to step back a little bit and appreciate the hilarity of that turkey leg begin on the field, hopefully courtesy of this guy:

8. Has an OSU QB ever suffered two more brutal losses at the hands of OU than Clint Chelf? I know he wasn’t elite today but he was spectacular on that final drive (sort of the inverse of 2012, actually) and I thought he’d cemented his legacy in Oklahoma State history. Alas, it was the defense, THIS defense, that couldn’t shut the door at the end.

Pending the bowl I’ll remember Chelf as a good, certainly not great, QB who showed me two things:

1. This offense doesn’t need an elite QB for this team to be elite.
2. What the epitome of a college athlete looks like.

Hope he’s had as much fun as we have.

9. John Saunders opened the postgame on ABC by saying “that was a $6 million loss for Oklahoma State!” [Jesse Palmer shakes his head and straightens his skinny tie, pistolsguy wants to die].

We were then gently reminded by OU’s compliance department about how costly this L was for Gundy and Co.

So that was all kinds of fun.

I don’t know what this loss means for OSU’s bowl chances. I think it probably ends up in the Cotton Bowl somehow even though I didn’t think that was possible last week. It’s also amazing that OU is probably going to a BCS game. You OU fans just keep clamoring for him to get canned. No, really, keep clamoring.

I’d take a Big 12 title over everything but I’m going to be extremely excited if we do, in fact, as CBS is predicting, get Lester in the Cotton. Ohhhh boy that’s going to be fun. There will be infinity GIFs.

10. Not sure enough will get made of this but OSU going prevent for the final drive was disastrous. I know it hasn’t been in a close game since Kansas State but why do you neuter the conference’s best defense when it has a chance to win you the Big 12 title? If you’ve danced with that D all year, why not let it seal the deal? I’ll look back on that, maybe more than anything, as the decision that cost OSU the 2013 title.

11. Speaking of defense, OU’s was spectacular, I thought. The goal line stands, the pick, and keeping OSU to four scores in 14 drives. That’s big-boy stuff and one huge reason OU walked out of BPS with another Bedlam.

12. For a team that doesn’t consider OSU its rival, I sure saw a lot of “this is our all-time record against OSU” graphics on Twitter after the game. Just throwing that out there.

13. This, my Oklahoma State friends, is true.

10 and 2 and am pissed….weve come so far since oh my god the insight bowl!

This is a fun place to be even if the wins mean less and the losses hurt more.

Plus, as by buddy Quade pointed out, it’s pretty silly to let what a bunch of kids do with a football affect your Saturday beyond “man, that really sucked” for a few hours.

I hope you’ve enjoyed reading this blog this year and that I’ve always conveyed that spirit — that this is fun and entertaining and not something in which identity should be found.