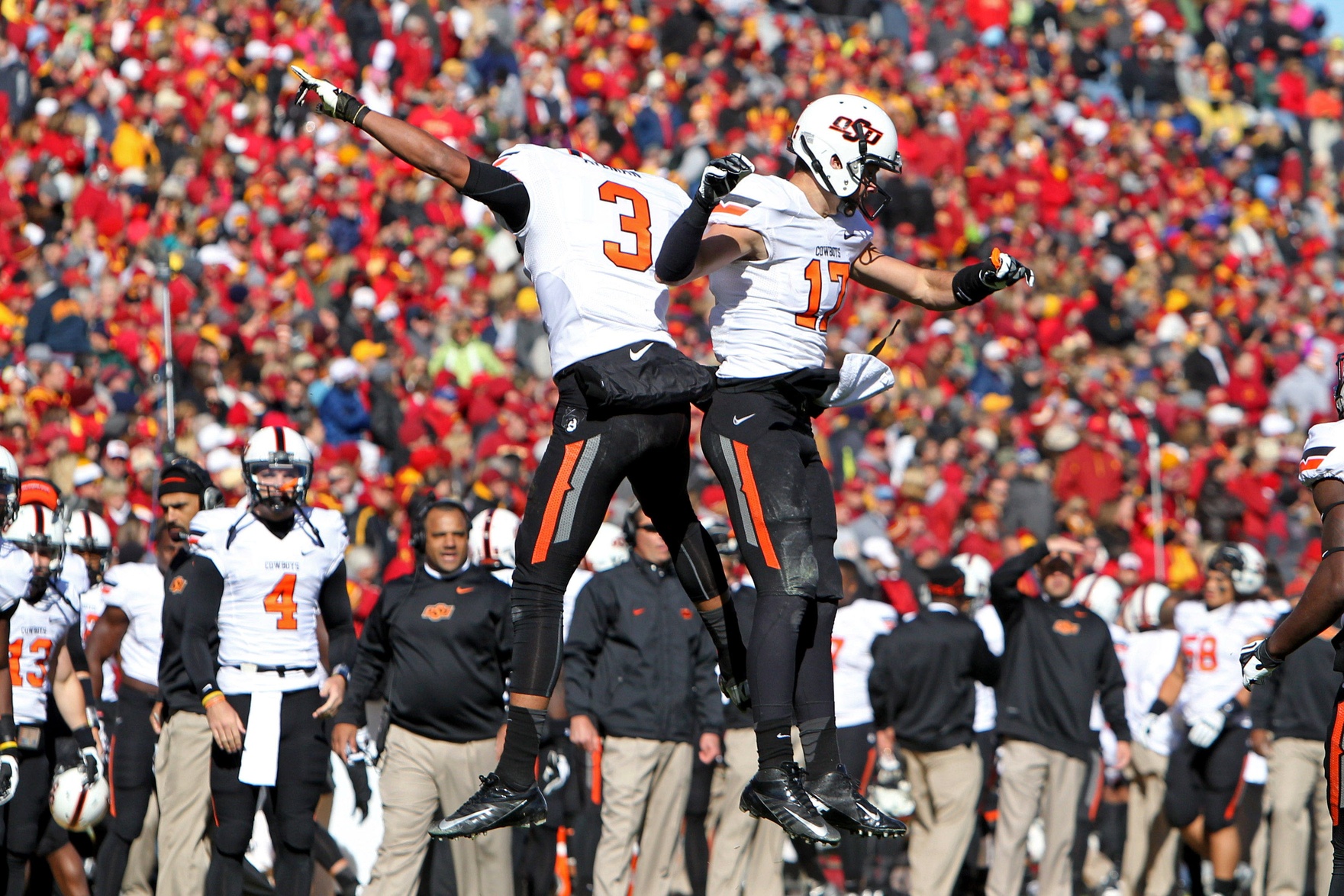 OSU finally got its revenge for 2011 on Saturday with a rout of Iowa State that didn’t really feel like a rout at all. Desmond Roland was a huge bright spot for the offense and the defense was its usual solid self but issues linger.

Let’s get to the thoughts…

1. Since coming in against TCU Clint Chelf is 21-51 with two picks and a TD. He had more yards rushing than passing on Saturday and he only had 84 yards rushing.

And yet I’m not totally sure what to do with the following stats:

It’s almost as if the team just plays more freely when Chelf is out there. I don’t really understand it but the numbers back it up.

I’m not saying either guy is the answer — and if Chelf’s day today is labeled “the answer” I don’t want to know the question — but I almost feel like it’s a matter of Walsh not being better than Chelf rather than Chelf not being worse than Walsh. If that makes sense, which I know it doesn’t. ON TO ROLAND!

2. Have a day, 26! I contextualized his outing here but even looking past the numbers (which, yes, I have the ability to do) he ran like he was pissed off, something OSU has lacked all year.

He doesn’t have the Randle shimmy or the Stewart elbow oil but he got the job done even if it looks ugly and slow (and my gosh, it looks slow) sometimes. Also, I said this on Twitter, but if your name is Desmond (or any variation thereof) isn’t it kind of your destiny to become a star at Oklahoma State?

3. The run game in general was spectacular. Iowa State’s defense against the run isn’t good (second worst in the Big 12 in front of Texas) but the 325 yards the Pokes put up on the ground were its eighth best ever in a Big 12 game in the Miles/Gundy era.

We’ve been ripping on the offensive line all season but it was magnificent in run situations and let its running backs and quarterback go for 7.7 a carry when the best any team had done against Iowa State in Big 12 play so far is 5.6 a pop. Kudos to them for pulling it together.

4. Does this surprise anyone? I guess it does me a little bit.

Gundy: "I wouldn't think that we would change (quarterbacks again)." Might use Walsh more, though. #okstate

The wind played into both teams’ struggles passing the ball and look, if they’d rolled Walsh out in the second half it would have just been a real-life game of Duck Hunt with 50,000+ people looking on. But I guess I’m more surprised that Gundy basically said “Chelf’s our guy, cya later!” since he hasn’t really done that since naming Lunt QB1 in April 2012.

Last note on this (for now): Stop saying Chelf doesn’t get Stewart the ball. Three of Stewart’s five double-digit catch games in college have come with Chelf at the helm, including the three in which he had the most yards of his career. That ain’t true!

1. I don’t hate Walsh. I hate it when people cite Walsh’s competitiveness for why he is/isn’t successful. The last straw for me was last week when multiple people wrote that he threw the pick against TCU because he was “too competitive” as if that was an excuse! It’s a disservice to Chelf (is he not competitive?) and a fallacy for why Walsh is or isn’t good.

2. Question: What do you value more, your job or how well this OSU team does? If you answered the latter you are either a.) dumb or b.) a college student. So when you whine on Twitter to me that I should “support this team” in lieu of trying to be entertaining, funny, or insightful, that’s silly. Because you can’t disentangle the two things isn’t a me problem.

3. I get this sometimes as well (that’s an OSU employee, btw). True story: Anybody could have started PFB — I can think of 10 people I know only on Twitter who could do this job. But anybody didn’t. That’s not a “feel sorry for pistolsguy” lesson, it’s a “don’t be scared to start something and stick with it” lesson for those of you out there who are itching to start something.

6. The announcing crew today really deserves its own post but I don’t have time so let’s just hit them real quick. My first indication that we were in for something special should have been that Brian Baldinger (who may or may not have been wearing eyeliner) has a Twitter handle called @baldyspinky (his photo is of his extremely crooked pinky) and hasn’t tweeted since 2011.

He then proceeded to call Jack Trice one of the “great” Big 12 atmospheres, say it had the best grass he’s seen all year (kinda doubt that given some of his comments), and name No. 9 on OSU “Kyle Stanley” (who, FYI, is T9 at the CIMB Classic in Malaysia right now). And that was all within the first 15 minutes of the broadcast!

He went on to call OSU a “high-powered offense” (you been watching, bro?) and butcher so many names that I was having to look up OSU’s roster to make sure I wasn’t the one making the mistakes!

It was a performance for the pantheon.

7. The OSU defense continues to be incredible. It held ISU to 1.42 points per drive (you’ll win every game if that’s the case — except WVU, I guess) and 3.3 yards per carry and 5.1 yards per pass — both numbers at or below its season averages (which are both third best in the Big 12).

It was also the first time since 2006 OSU scored multiple defensive touchdowns in the same game. My heart wavered on the Gilbert pick-six, for those of you wondering. Still here, though.

8. Random receiver thoughts: Brandon Sheperd’s double move is more like a 1.4x move, Tracy Moore’s career makes zero sense to me, John Goodlet got more targets today than it feels like Marcell Ateman has all year, and this is the second time since 2009 OSU has had a receiver not go over 40 yards in a game…both this season.

9. If I would have told 1993 OSU fan that OSU’s defensive line is easily its best unit, there would be a lot more club seats available now than there are right now.

Also, 1993 OSU fan would be pretty mad at how bored I am with a team that has scored 55+ in three of its seven games, is bowl eligible on October 26th, and will control its own destiny as a top 15ish team from November on.

10. I know it hasn’t been pretty but 6-1 is 6-1. Best case scenario (on many levels) is Tech squeaking out an emotional last-second win in Norman so you get them drained in Lubbock next weekend.

I know I sound like Robert Allen right now but OSU’s defense is elite and its offense might…no I can’t talk myself into it.

You’re going to have to win games on turnovers and big-time special teams plays in a lot of your games from here on out. That’s fine because I think OSU can do it (looking at you, Gilbert) and IF the offense can click on any level this team can (I think) still (somehow) win (maybe) the Big 12.