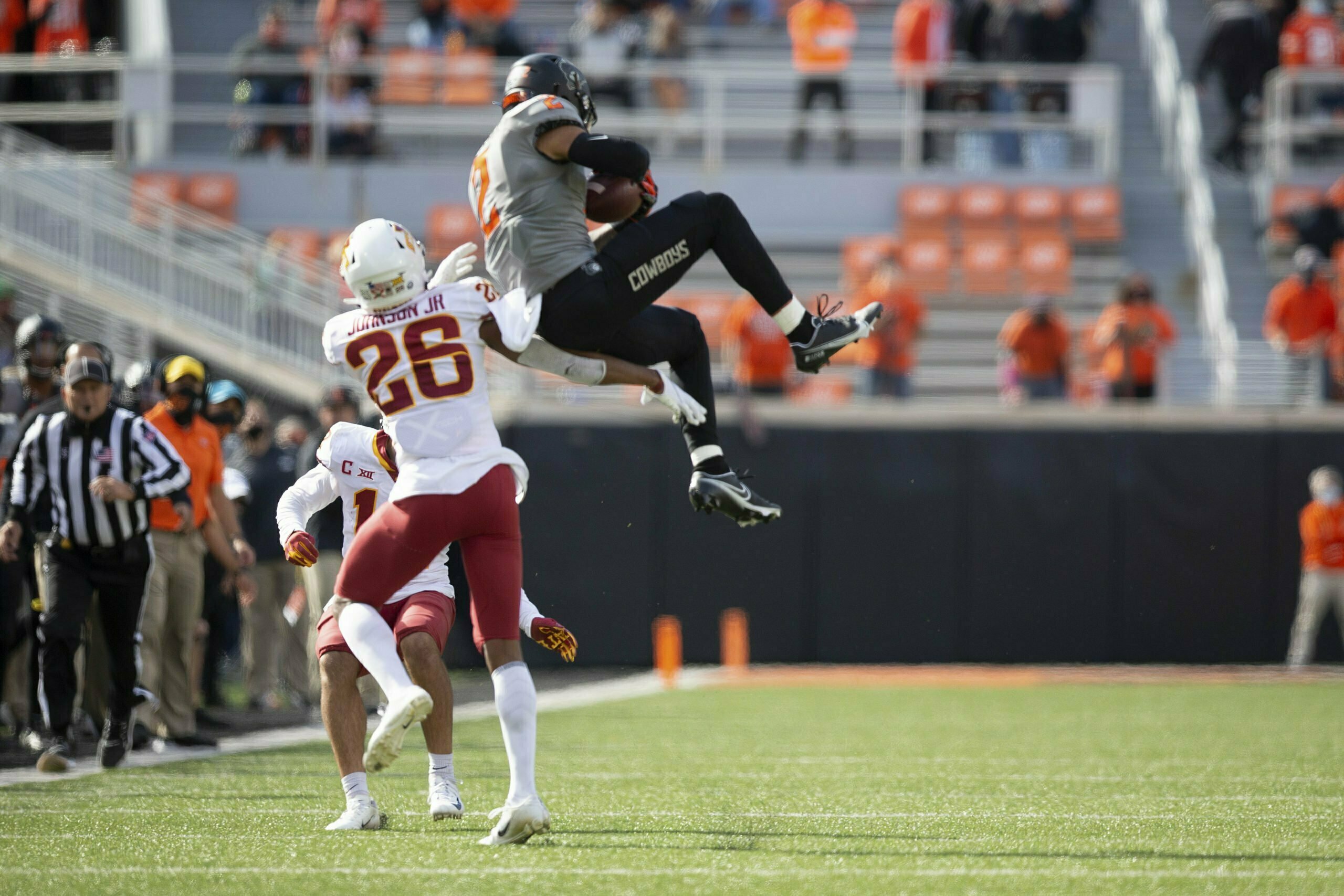 The Cowboys have only been dominant in one of their four games this season, but the important thing is that they’ve won all four.

Oklahoma State topped Iowa State 24-21 on Saturday in Boone Pickens Stadium. The was the No. 6 Pokes’ first “real test,” with the Cyclones entering the game ranked 17th. Here are 10 thoughts from the Big 12 leader’s win.

1. That Ending Got Ugly

This was the best OSU game all year, but then everything started getting ugly late.

There was a phantom holding call on Tylan Wallace that took back a Spencer Sanders touchdown.

Then Mike Gundy put all the pressure on his defense taking consecutive delay of game calls in Iowa State territory to create room for a punt.

On one third-and-short late, Chuba Hubbard was on the sideline for some reason.

Then Iowa State put together a 10-play, 83-yard drive that included a questionable call where Charlie Kolar tiptoed the sideline (you be the judge).

There were also nine flags thrown in the fourth quarter.

I would’ve liked to see OSU be a little more aggressive down the stretch, but in a wild, COVID-riddled season, you just have to find a way to win and the Cowboys did.

News broke Saturday morning that Spencer Sanders would get the start at quarterback for OSU, having finally returned from an ankle injury.

This week Gundy said OSU could use Sanders and true freshman Shane Illingworth. That didn’t happen.

He made a few remarkable plays, but the two turnovers were a definitive blemish. Both of Sanders’ interceptions led to Cyclone touchdowns.

With that said, there were things Sanders did that Illingworth just can’t. Sanders gives the Cowboys the best chance to win moving forward, but only if he can keep the turnovers at a minimum.

3. This Is the Best Defense Mike Gundy Has Ever Had

Iowa State scored just 21 points, had 389 yards of total offense and were 3-for-13 (23 percent) on third down. Those numbers are all Big 12-lows for the Cyclones this season.

OSU’s defense looked a little shaky early, but it was as if the Cowboys were robots downloading the Cyclones’ offense before locking on the clamps.

Through four games, the Pokes are allowing 12 points and 303 yards a game, both of those numbers are season-lows for OSU in the Mike Gundy era.

Trace Ford was in Brock Purdy’s grill most of Saturday.

The true sophomore finished the game with two tackles, a 9-yard sack and two pass breakups where he batted the ball down at the line of scrimmage. He seemed to get better as the game went on with his sack and two deflections coming in the second half.

It’s crazy how good he is, and he doesn’t even get the chance to go to the NFL next year, just being a sophomore.

As good as Ford was, Tre Sterling was the defensive player of the game.

Early in his career, Sterling was sort of lost in the shuffle behind guys like Kolby Harvell-Peel and Jarrick Bernard-Converse, but since breaking into the lineup last season, Sterling has been phenominal.

On Saturday, Sterling had a team-high nine tackles. Two of those tackles were for loss, and he had a clutch, textbook pass breakup in the fourth quarter.

In the win, Sterling jumped ahead of Amen Ogbongbemiga for most tackles on the team with 28. His four tackles for loss also lead all OSU defensive backs.

I’m confident Chuba Hubbard and Breece Hall will both be solid NFL backs one day, and watching them go at it Saturday was awesome.

In looking at those numbers, it’d be easy to say Hall got the better of Hubbard (which he probably did), but Hubbard was probably more consistent.

Hall had a pair of long runs where he ran untouched for a combined 136 yards. Those two plays might have been more on OSU’s defense than Hall himself (he is still outstanding don’t get it twisted).

Taking out Hall’s untouched 66-yard touchdown run in the third quarter, he carried the ball eight times and had 29 yards in the second half.

Hubbard had 12 carries for 73 yards in the second half.

Hall still had the better day in terms of stats, no doubt, but Hubbard just kept going.

Oh, and his first-half touchdown was probably the best TD run of his career.

7. Which Team Was the One with the Good Tight Ends?

The only tight ends anyone talked about (myself included) going into this game were Iowa State’s.

Jelani Woods can get taken off the milk cartons. He caught his fourth career TD in the first quarter, a 34-yard score.

Statically, this game won’t stand out in Tylan Wallace’s career, but he did a lot of things right.

Wallace caught five passes for 76 yards. Not horrendous by any means, but not jaw-dropping. However, he also crunched some defensive backs with blocks.

We’ll start with him planting Anthony Johnson on his rear end:

Then he had a crucial block for for Spencer Sanders’ touchdown run a play after Wallace brought in a 40-yard catch-and-run:

He sprung Sanders again in the fourth quarter, but somehow a hold was called on this play:

Wallace is a top-five receiver in OSU history, but he might be the best blocking receiver in program history.

9. A Bad Day for Kickers

Kickers were just 1-for-4 on field-goal attempts this game with OSU’s Alex Hale and Iowa State’s Connor Assalley each attempting two.

Hale had the first miss of his career on a 37-yard attempt in the first quarter. A good sign for OSU is that he managed to get it out of his head and hit a 31-yarder in the fourth.

Meanwhile Assalley pulled a 48-yard attempt in the first quarter. Then he doinked a 33-yard attempt solidly off the upright in the second quarter.

It was a classic “college kickers” kind of day.

10. OSU Firmly in Driver’s Seat to Make It to Arlington

Oklahoma State and Kansas State are the only unbeaten teams left in Big 12 play. 2020!

OSU has now beaten the only team with just one conference loss (Iowa State).

The Pokes still have to play Oklahoma and Texas, but the Cowboys are nearing a lock to make it to the Big 12 Championship game just three games into conference play.

The Cowboys are also still the league’s only hope to make the College Football Playoff because of Kansas State’s season-opening loss the Arkansas State.