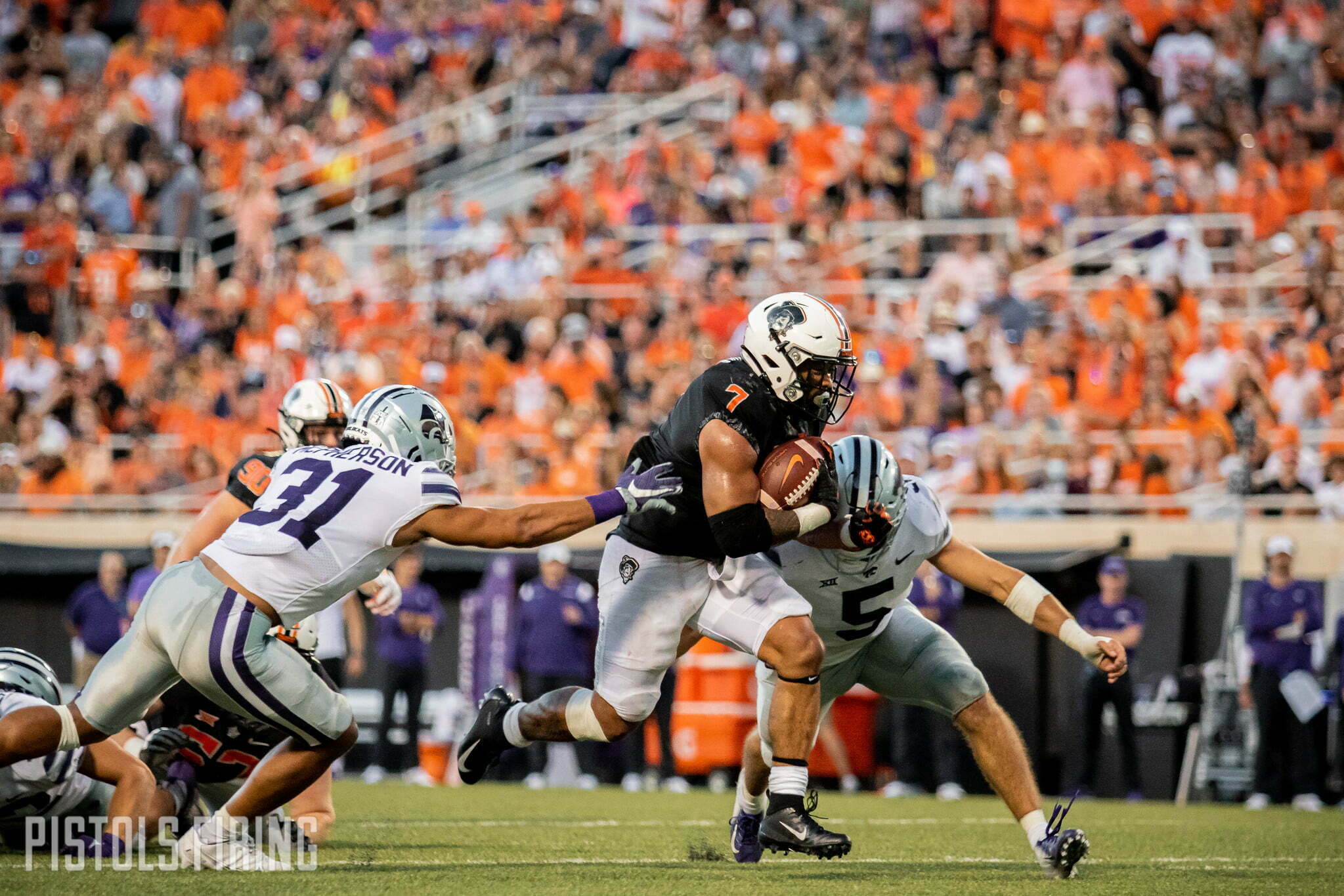 STILLWATER — The Cowboys had lost four of their past five conference openers, but that was no hex Saturday night.

Oklahoma State defeated Kansas State 31-20 on in Boone Pickens Stadium to advance to 4-0. Here are 10 thoughts from the game.

It’s as if Jaylen Warren has a third-person view of himself when dodging around defenders, able to see the man in front of him, the man behind him and the man who will come next.

When there is seemingly nowhere to go, he hits the spin button or flicks the stick to juke just to see what happens. Often times those last-second button mashes get him an extra yard or four.

Warren ran for 123 yards on 27 carries against a defense that allowed only 54.7 rushing yards a game entering Saturday. Southern Illinois running back Javon Williams ran for 46 yards against K-State, the most a rusher had against the Wildcats entering Saturday.

There was some wear on Warren after toting 59 carries the past two weeks. He cramped up after a third-quarter carry and had to go get an IV. Warren is apparently “a sweater,” which provides a challenge with hydration.

“He just runs hard,” offensive coordinator Kasey Dunn said. “You see the guy work up a lather in the pregame warmups. It’s like, ‘Hey man, the game hasn’t started yet,’ and he’s already sweating like he’s played four quarters.”

On top of his rushing success, Warren caught four passes Saturday for 81 yards. He had a 52-yard catch-and-run on OSU’s first play from scrimmage off a screen play.

LD Brown and Dezmon Jackson missed Saturday’s game with injuries, leaving only Warren and Dominic Richardson in the Cowboys’ backfield, but if Warren can continue as he has the past two weeks, he’ll be viewed as one of the best backs in the conference, not only OSU’s backfield.

For the second straight weekend, OSU didn’t score in the second half.

A big reason for that is the fact that OSU had seven penalties for 64 yards in the half (to K-State’s zero), and OSU kicker Alex Hale missed a pair of field goals. If he would’ve hit those, things would’ve been a little more bearable.

Gundy said the plan wasn’t to go conservative in the second half, but that it kind of just played out that way. Dunn pointed to the penalties as something that made things difficult to get back into the rhythm the offense played with in the first half.

“When you have that and get behind the sticks, you force the quarterback into situations you don’t want to,” Dunn said. “It’s hard to turn around and hand the ball off on second down and 22 and expect to get 20 yards out of it. It’s kind of a weird situation that you’re in calling it.”

Second-half offense is still something the Cowboys will have to prove, but Saturday was unique because in the second half, the team had to navigate a 2nd-and-25, a 3rd-and-20, a 1st-and-14, a 2nd-and-26, and a 3rd-and-16. Not ideal down and distances.

3. But the First Half, Though

This was supposed to be a grind-it-out, Big Ten-like game, and it started like a track meet.

K-State started with a long field-goal drive. OSU scored a quick TD. K-State returned the kick for a score. OSU marched right back down and scored again. The Cowboys scored 21 points all last week. They had 28 points after their first three drives Saturday (because of a defensive touchdown).

It was a balanced attack with Tay Martin (who we’ll get to) providing a receiving threat and Warren running over, under, around and away from people.

This was the first full glimmer of the season of what OSU’s offense could be. Will it continue to grow? That’s the big question, but for at least a half Saturday night OSU was playing vintage OSU football.

The Cowboys had only 13 passing attempts in Boise last weekend. They threw 12 passes to Martin alone Saturday. The Washington State transfer played only two snaps in the Tulsa game before not even traveling to Boise with an ankle injury. He provides something the Cowboys don’t have elsewhere. OSU coach Mike Gundy said that something is experience.

He finished with nine catches for 100 yards and a touchdown. He has had 100 receiving yards in each of the full games he has played in this season, something that seemed like a pipe dream when OSU threw for 82 yards on the blue turf last weekend.

This might have been the best college game Spencer Sanders has played to this point.

He finished 22-for-34 with 344 yards, two passing touchdowns, a rushing touchdown, no interceptions and no fumbles. Some people point to Sanders’ 2019 performance in Corvallis (his first career start) as his best game as a college player. He has had a couple of gutsy performances against Texas, but both ended in losses. His game at the Cheez-It Bowl last season was also good (he threw for fewer yards, but four TDs).

Regardless of what game you think he played best in, it’s a good sign for the Cowboys that this game at least becomes a part of the conversation. He didn’t try to do too much. There wasn’t a ball where the entire stadium gasped in terror midflight. He had a good read on his touchdown run that saw him gleefully skip into the end zone untouched.

For the first time this season, Sanders led the offense OSU spectators expected, one that was balanced and used a handful of weapons.

I got lambasted in the comments for saying Spencer Sanders had a solid game he could build off of in Boise. I’m not right a lot, but guess what? He built off it.

This was the first time this season OSU’s starting offensive line was the same for consecutive games.

Cole Birmingham, Josh Sills, Danny Godlevske, Hunter Woodard and Jake Springfield all reprised their roles from Boise State last weekend, something that is a big deal in terms of this offense finding its footing.

Gundy did note they worked Caleb Etienne in some at left tackle, but as long as they can bring him along at a healthy pace and not have to play “musical chairs” because of injury, the building blocks should continue going up with this group.

“They’re getting comfortable out there as a group,” Gundy said. “Knock on wood, I don’t think any of them got dinged up. It’s hard for me to say because I thought that before and come in on Sunday and something happened to them.”

K-State scored one offensive touchdown, and it came on a miraculous play where quarterback Jaren Lewis somehow got rid of a ball while being sacked and an uncovered Deuce Vaughn scored from 55 yards out. Outstanding, that play was, but sustainable, it was not.

K-State had six three-and-outs, five of which came in the second half. That doesn’t even include the fumble recovery touchdown Malcolm Rodriguez had in the first quarter or the interception Kolby Harvell-Peel had in the second quarter.

Entering Saturday, K-State running back Deuce Vaughn led the conference in rushing yards and hadn’t had fewer than 120 yards in his first three games. He had 22 rushing yards against the Cowboys.

Then there’s the staple stat of a Jim Knowles defensive performance: K-State was 2-for-12 on third down.

For the first time this season, a Cowboy out-tackled Malcolm Rodriguez.

Harvell-Peel was everywhere, finishing with eight tackles, a tackle for loss and an interception.

He had the pick, his second in as many weeks. He also dropped another would-be INT.

“I don’t wanna talk about it,” Harvell-Peel said of the dropped INT.

His tackle for loss came on an important 3rd-and-1 in the third quarter.

After a breakout sophomore season in 2019, Harvell-Peel statistically took a step back last season (but he was still quite good). With 26 tackles and a pair of interceptions in four games, this looks like the All-Big 12 First Teamer, and Team MVP from two seasons ago.

Brennan Presley was the fan favorite entering his sophomore season.

He put together some solid numbers in the first three games of the season, but Saturday gave reason for the Presley hype train to get chugging again.

Presley caught two passes for 53 yards and a touchdown. His touchdown came on a 20-yard reception in which he wanted to score more than the K-State defense wanted him to not score.

On top of that, Presley had 75 return yards split between kickoffs and punts. He filled in for an injured LD Brown on kickoff return and nearly busted a Brown-like touchdown return, going 37 yards before being brought down.

There were plenty of reasons in the nonconference to believe OSU wouldn’t last as an unbeaten team.

Week 1: Did OSU really go down to the wire with an FCS team?
Week 2: Without that blown call in the corner of the end zone, would OSU have beaten Tulsa?
Week 3: Boy, did that whistle save OSU from Boise State?
Week 4: Oh, the Cowboys are clearly better than this unbeaten team that beat Stanford (for what that’s even worth).

In reality, 4-0 is 4-0 no matter how it’s achieved, but I expect there will be a lot more buzz around the orange-clad watercoolers next week thanks to how OSU got to 4-0.