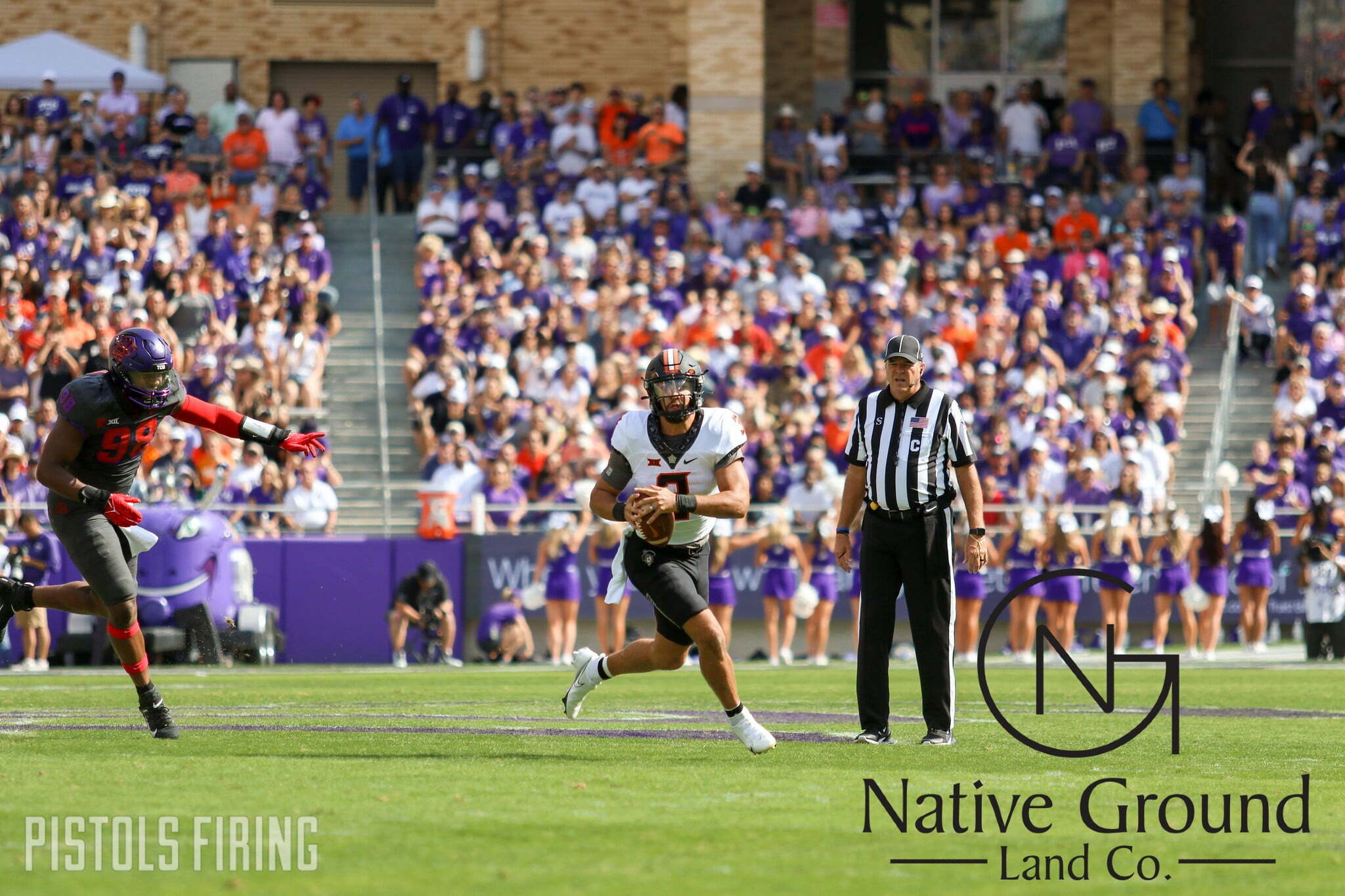 FORT WORTH, Texas — With as wild as the Big 12 has been this season, it seemed unlikely the Cowboys would get out of things unscathed, but the way Oklahoma State’s loss came Saturday is going to sting.

Oklahoma State fell to TCU 43-40 in Amon G. Carter Stadium after leading by double digits for most of the day. Here are 10 Thoughts on the game.

With 10:04 left in the second quarter, OSU scored to go up 24-7. The Cowboys didn’t score another touchdown in regulation.

The Cowboys’ offense grew incredibly stagnant, an issue Mike Gundy blamed on a lack of run support. The Cowboys carried the ball 41 times for 141 yards, which is 3.4 yards per carry. For reference, TCU rushed for 5.2 yards a pop.

After that second-quarter touchdown, OSU’s offense had back-to-back three-and-outs where they had -5 total yards. Coming out of halftime, the Pokes had consecutive field-goal drives before three three-and-outs and an interception to close out regulation.

For most of this season, unlike last season, the Cowboys’ offense bailed out their defense. But Saturday, Kasey Dunn’s group kept putting the OSU defense on the field. In the second half, TCU had the ball for 18:08 to OSU’s 11:52. Derek Mason’s group was bound to spring a leak at some point.

OSU’s run game has been suspect throughout the season aside from a strong performance against Arizona State. With that said, I’m not sure any sweeping improvements can be made this late into the season.

Spencer Sanders didn’t practice this week, according to the TV broadcast.

Rumors swirled all Saturday morning about everything from his shoulder to his ankle. He played, but it doesn’t sound as if he is 100% based on the iron wall Gundy, Sanders and Dunn put up about his status in postgame media sessions.

“I don’t want to talk about any injuries directly related to players and how much they practice,” Gundy said.

If it was an ankle, it sure seemed fine. He scored rushing touchdowns on OSU’s opening two series and finished with 68 rushing yards on 6.2 yards per carry.

It’s hard to say how much it affected his passing game. Sanders hasn’t been a high completion-percentage guy this season, but the 44% of passes he completed Saturday was abnormally low.

If he played Saturday, one would think he’d be available again next Saturday, but Sanders’ importance to this team can’t be understated. If he isn’t 100%, neither are the Pokes.

3. Officials Adjust a Rule Midway Through the Game

Mike Gundy has taken advantage of knowing the defensive substitution rule for multiple years at this point.

When an offense makes a substitution, the defense has an opportunity to match it. So, if TCU made a late sub, an OSU defensive lineman would mosey onto the field and tell another to get off, forcing TCU to either take a timeout or a delay of game.

Sonny Dykes, TCU’s coach, burst into fits of rage in the first half to the extent that the officials adjusted the rule at halftime.

Is Gundy taking advantage of that rule? Yes, absolutely. But, the rule is the rule. Altering it in the middle of the game seems extreme based off a coach going berserk and some fans yelling.

OSU didn’t lose Saturday’s game because of this change, but the fact that it was changed was wild.

“I’m not sure right now,” Gundy said. “It’s kind of a train wreck. I’m not saying whose fault it is. I’m just not clear on what’s going on, to be honest with ya. We’ll have to try to figure it out and see what’s going on.

“It’s a combination of a lot of things. There needs to be some clarity on how it’s supposed to work now. It’s been different these last two weeks for us than it has been for a long time for me. And then we have to be better as coaches in the adjustment as we go on through the game.”

Josh Newton and Tre’Vius Hodges Tomlinson were the Horned Frogs’ players of the game.

Braydon Johnson and Bryson Green, OSU’s primary outside receivers, combined for three catches (all from Johnson) on 12 targets for 38 yards.

With OSU not having an answer on the run game and unable to get the ball to its big targets, it handcuffed the Cowboys’ offense.

5. Tackling an Issue for OSU

TCU’s running backs had some incredible second-effort runs Saturday that saw them revive a seemingly dead play. Part of that is hard running — another part of that is poor tackling.

This game wasn’t the defense’s fault, but if the D could’ve gotten a guy on the ground on a few crucial occasions, who knows?

Still, Mason Cobb had 16 (!!) tackles Saturday, the most in program history since Jordan Sterns’ 19 in 2016. And he said even he left some meat on the bone.

“That’s what we do as defenders,” Cobb said. “We’re there. We’re in the backfield. We’re stuffing the line, and it’s really frustrating when we can’t get him back there. I had probably six or seven where that’s something I need to work on the next coming games.”

There are Heisman moments, then their are Groza moments. Tanner Brown had the latter Saturday.

Brown was 4-for-4 on field-goal tries, including a career-long 52-yarder in overtime to give OSU a brief lead. He is 12-for-12 on the season after Saturday.

7. The Rotating Door of Centers

OSU’s run game wasn’t necessarily outstanding even when starting center Preston Wilson was healthy, but him missing Saturday’s game sure didn’t help anything.

On top of that, backup center Joe Michalski was banged up, leading to Eli Russ to make his first start. Oh, and then Russ got banged up forcing an injured Michalski into some snaps before Russ was able to return.

No team knows the importance of a solid man in the middle of an offensive line than the Cowboys — just watch last season’s Big 12 title game.

8. Orange Invasion in Fort Worth

Here is what my view looked like with 4:52 left in the third quarter:

TCU doesn’t have a big alumni base. OSU might have more grads in the DFW metroplex than the Horned Frogs.

In full transparency, the other side of the stadium was mostly purple, but it was cool to see the Sea of Orange invade an opposing stadium. For OSU’s sake, hopefully that continues to happen despite Saturday’s result.

OSU’s offense was abysmal, we’ve hit on that enough, but in the first overtime the Cowboys were two yards away from getting out of Fort Worth with a win.

The Cowboys scored after TCU scored, giving OSU the opportunity to go for 2 and the win instead of forcing the sputtering offense to have to find another way to score. The game continued and the rest is history.

“Kind of, a little bit [considered going for 2],” Gundy said. “Two is a low-percentage play. I felt like we need to kick it and give ourselves a chance because the way the rules are set up, you’re getting ready to go for 2 anyway [in the second overtime].”

10. The Road to Arlington Becomes Treacherous

Had OSU found a way to win this game (that it had a 17-point lead in), you could’ve written in pencil OSU’s name in the Big 12 title game.

It would’ve beaten another contender and been unbeaten in a league that has cannibalized itself. Instead, those spoils go to the Horned Frogs, and OSU jumps into the dog fight with Kansas State, Kansas, Texas and maybe Oklahoma. There will be more twists and turns to come, but OSU’s road which was once a newly paved path has become entangled with potholes and fallen trees.