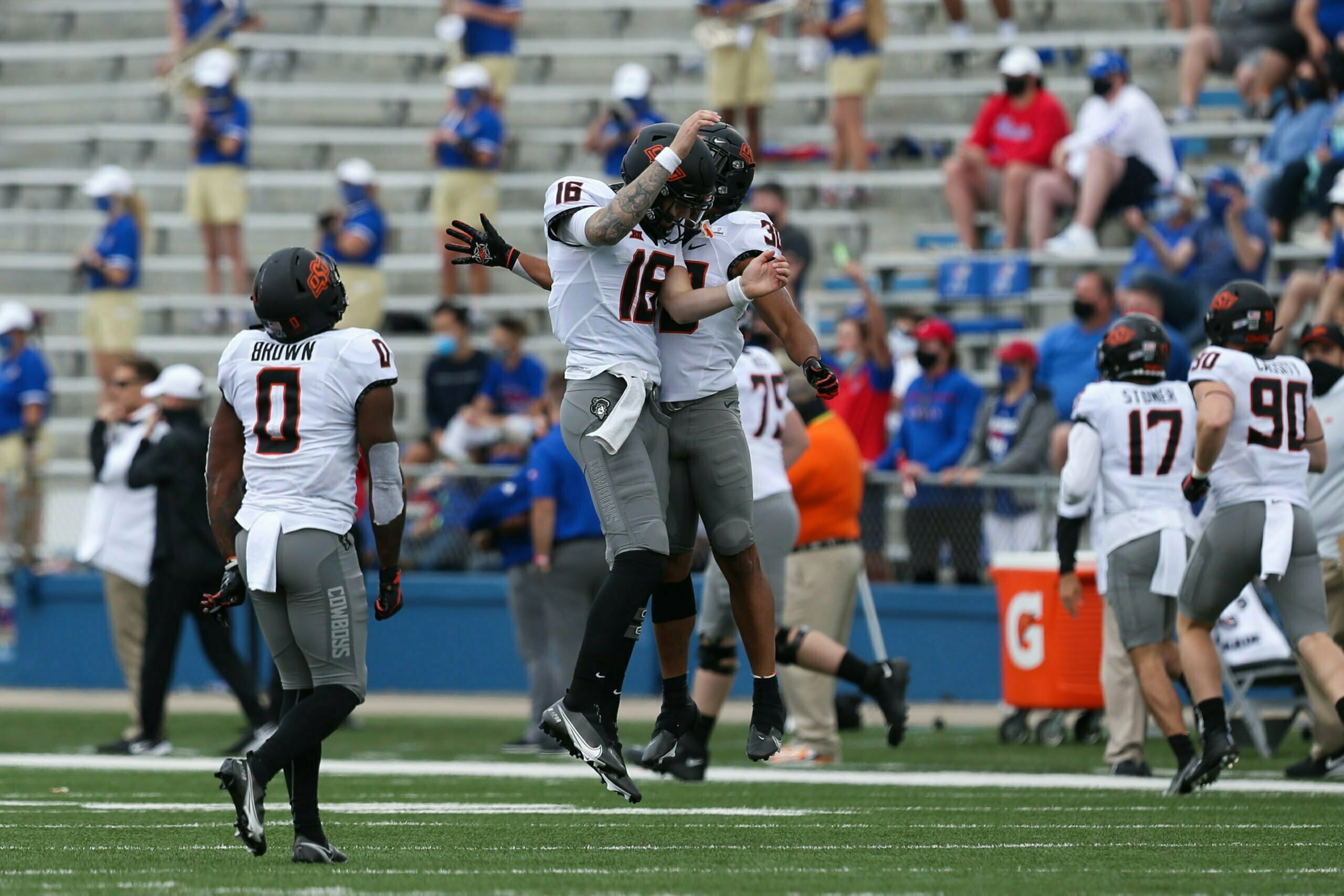 After consecutive weeks in which the Cowboys had to grind out wins, Saturday’s game was over in the first quarter.

Oklahoma State molly-whopped Kansas 47-7 in Lawrence, Kansas on Saturday, extending its winning streak against the Jayhawks to 11 games.

This all comes with the humble reminder, however, that Kansas isn’t good at football. So yes, OSU had big a big day across the board, but it was against quite possibly the worst team in all of Power Five.

With that said, here are 10 thoughts on OSU’s most convincing win of the season (so far).

Chuba Hubbard, Tylan Wallace and Shane Illingworth will get plenty of Saturday headlines, but this Cowboy defense is still the most dominant unit OSU has.

Through three quarters (when starters were still in for the most part), OSU led 44-0 and Kansas had 83 yards of total offense, averaged 1.2 yards a rush and were 0-for-11 on third down.

Through three games, OSU has allowed, on average, 9 points and 274 yards of total offense per game.

I’m a big fan of offensive football, but this is the first time I can remember that I’m having actually enjoying watching a defense be as dominant as OSU’s has been in the Big 12.

2. A Nice Confidence Builder for Illingworth

I imagine OSU’s staff is hoping these are the last meaningful snaps Shane Illingworth will play this season.

Spencer Sanders should be back for the Cowboys’ game against Baylor, meaning Illingworth’s time as QB1 should be done for a little while, and it was a great way to go out.

The true freshman finished Saturday 17-for-23 with 265 yards and three touchdowns. He eclipsed his career high in yardage with 10 minutes to go in the second quarter.

These first three weeks aren’t how anyone envisioned OSU’s season starting, but this time could prove to be invaluable for Illingworth and OSU. The Cowboys’ staff knows what it has in its backup QB, and Illingworth knows that he can hang at this level.

Hubbard looked as if he was in cruise control en route to his 145 yards and two touchdowns on 20 carries.

Hubbard also managed (for now) to hush thoughts that he should split carries with LD Brown, who had eight carries for 37 yards. The two look like great friends, so I doubt they thought much of the outside noise about the pair, but it’s a vindicating day for Hubbard nonetheless.

Hubbard looked smoother and more decisive with his runs than he had all season and that confidence for him and the offensive line should benefit the Pokes moving forward.

Speaking of Hubbard and Brown, the two were on the field together in the first quarter, but not as many would expect.

Hubbard was lined up as a slot receiver with Brown in the backfield. The Cowboys called a pass play for Hubbard in the end zone. He was unable to connect with Illingworth, but I imagine just seeing that look made some Big 12 defensive coordinators sweat.

If OSU can force some man coverage on Hubbard with a linebacker, he can run right by his defender on a wheel route. This probably won’t be a regular staple of the offense, but it’s an interesting wrinkle we haven’t seen.

It’s OK to devote three thoughts to OSU’s run game when the Cowboys run for 295 yards.

In just his second Division I game where he has gotten carries, Jackson got 10 touches, primarily in garbage time, where he ran for 91 yards.

True freshman Dominic Richardson also made his OSU debut. Richardson, who originally signed with TCU before ending up in Stillwater, got 12 carries and gained 21 yards. His potential was visible in a few of his runs, but this truck stick was probably his highlight of the day.

In total, non-Hubbard/Brown running backs ran for 129 yards at 5.9 yards per carry.

Similar to how this could be a good day down the line for the development of Shane Illingworth, it also allowed OSU to see what it has at RB post Hubbard and Brown.

Hubbard has long been on the NFL’s radar, and Brown has made waves in the early part of the season. Both could return to OSU next season, but there is also a world where both are gone. So, it’s good for OSU to know what it has in guys like Jackson and Richardson.

In relatively limited targets thanks to Sanders’ injury, Tylan Wallace looked good in OSU’s first two games, but he got to have a vintage Tylan Wallace day against the Jayhawks.

It helped when KU was guarding Wallace like this:

But regardless of the opponent, Wallace’s nine catches for 148 yards and two touchdowns makes it look like he is back in Biletnikoff form.

7. Is this a New All-Time Low for Kansas Football?

I’m not going to act like I remember Kansas’ glory days of the Mark Mangino era (because I was 14 when it ended), but the Jayhawks have still not recovered from whatever form of voodoo they got into.

After a promising 3-9 record in Les Miles’ first season, KU is on track to go winless like it did in David Beaty’s first year in Lawrence.

Only having one nonconference games this season doesn’t help the optics of this season, but KU was still unable to beat Coastal Carolina. Now the Jayhawks have been outscored 94-21 in two Big 12 games.

At my age, it’s hard to imagine this team won an Orange Bowl this millennium. KU is like the Cleveland Browns, having an inability to get out of this nightmare.

Alex Hale made my thoughts last weekend, and here he is again.

Hale has been automatic this year. He is up to 8-for-8 on the season and doesn’t look like missing. If he makes one more kick without missing, he’ll tie Ben Grogan for the 10th longest make streak in program history, and these are his first attempts.

In a year where things can get weird, this might be the perfect season for OSU to have an outstanding defense and a solid kicker.

9. Sanders Gets an Extra Week

My thought process going into this game regarding OSU’s quarterback situation was “If Spencer Sanders is 100 percent, play him. If he isn’t, don’t.”

It sounds like that was the thought process of OSU’s coaching staff as well. On the pregame radio show, Mike Gundy said Sanders should be at at least 80 percent after being about 70 percent last weekend.

I think it was the right decision to give the dual-threat QB extra time to recover, but it’ll be interesting to see how much (if any) rust he shows if he plays against Baylor on Oct. 17.

Sanders injured his thumb against Kansas last season. That game was played on Nov. 16. Since then, Sanders has thrown only two passes in competitive football games.

Luckily for the Pokes, Baylor doesn’t look like a world-beater this season (the Bears lost to West Virginia in overtime Saturday). But OSU has to hope Sanders can come out of the gate hot to take advantage of this lead it has on the Big 12.

Speaking of: no Big 12 teams have played more than three games, and Oklahoma State is the only unbeaten squad left.

The Big 12 is starting a circle of suck, and the Cowboys are the only team to avoid said circle to this point.

OU has figured out ways to the College Football Playoff even after bad losses (see last year), but the Sooners have to go through the rest of the Big 12 and not lose.

As of Oct. 3, OSU looks like the league’s only chance to get to the Playoff, that is as long as the rest of the league doesn’t diminish the conference’s reputation so much that the committee prefers two SEC teams or two Big Ten teams instead of one Big 12 team.