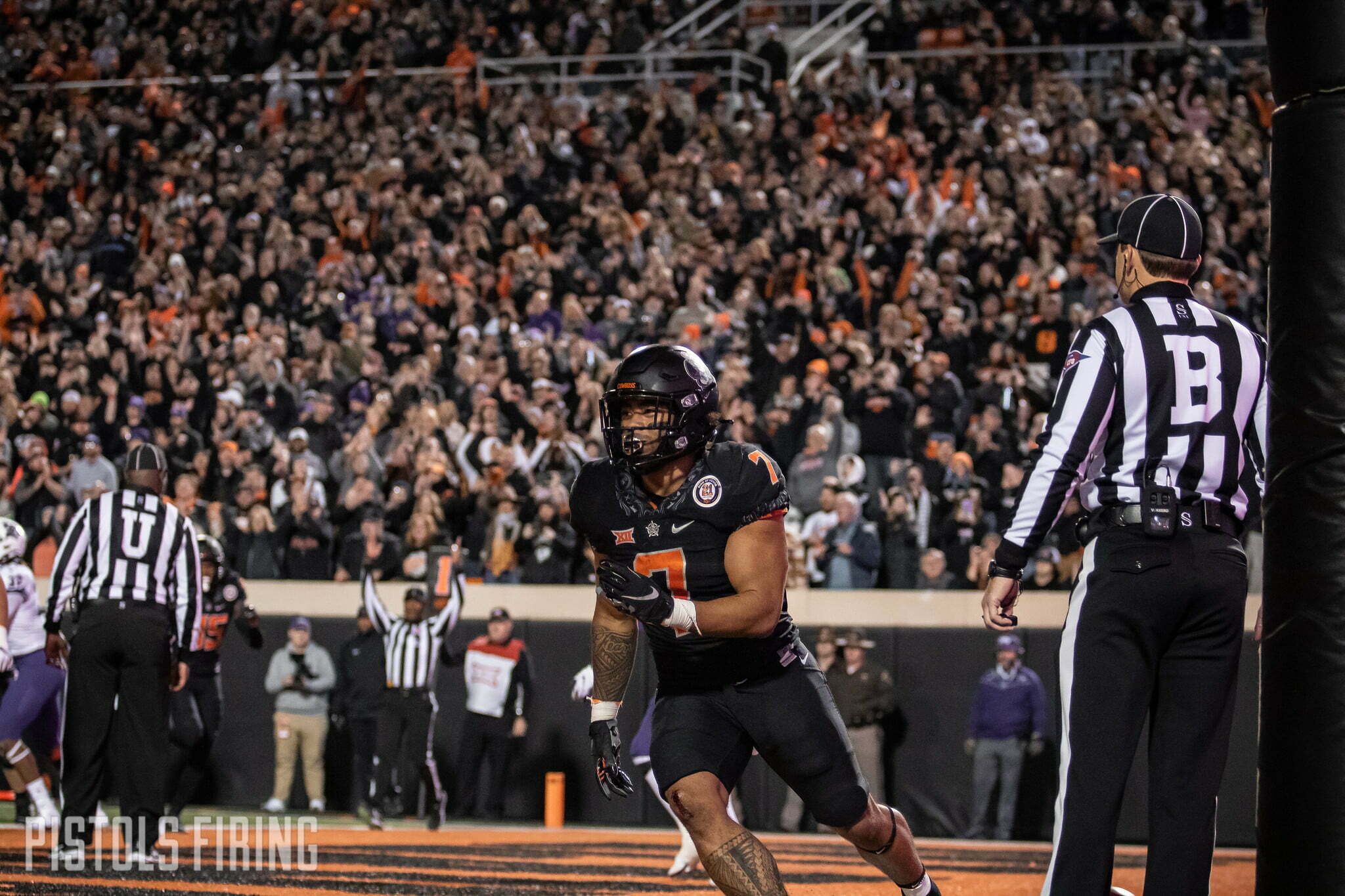 STILLWATER — On a day that was as wild as any for the Big 12 conference, the Cowboys took care of business.

Oklahoma State defeated TCU 63-17 on Saturday in Boone Pickens Stadium. Here are 10 thoughts from the game.

Jim Knowles’ bunch took about two series to download what TCU was trying to do. Then the domination ensued.

The scoreboard says TCU scored 17, but only 3 of those points came against OSU’s starters. In the past three weeks, OSU has given up 23 points total.

I’m running out of anecdotes to note how dominant OSU’s defense has been because week after week the Cowboys are their same dominant selves. TCU was 2-for-13 on third downs. In the past three weeks teams are 4-for-40 on third downs. That’s 10%. The Cowboys had 12 tackles for loss and seven sacks. OSU has 15 sacks in the past two games. Again, ridiculous.

2. The Atmosphere Was Electric

OSU had a lot going on around this game. It was Barry Sanders day. Sanders’ statue was unveiled, and his name and number went up in OSU’s Ring of Honor.

It was also a blackout for a November night game for this Top 10 team. I wasn’t sure how the blackout would turn out, but it was awesome.

It was the best atmosphere Boone Pickens Stadium has seen since at least the West Virginia game in 2018, but maybe even the Texas game a few weeks before that.

3. Hope You Had Jaylen Warren on Your Fantasy Team

Jaylen Warren was all the way back after not having 100 rushing yards in his previous three outings. Warren hit 113 yards on just 17 carries (6.6 yards per). He also scored three touchdowns, the most in a game in his D-I career.

Running like Barry Sanders was watching (which he was), Warren slashed and gashed through the Horned Frogs’ defense, breaking off runs of 24 and 43 yards.

Warren did pick up and injury in the third quarter, but after the game Gundy said Warren just got the wind knocked out of him. There wasn’t much of a reason to put him back in afterward, given the score.

4. The Cowboys’ Bullpen of Backs Also Had a Day

Warren was great, but Dezmon Jackson, Dominic Richardson and Jaden Nixon weren’t too shabby either.

Those three backs combined for 271 yards and five touchdowns on 31 carries.

Jackson scored his first and second touchdowns of the season, running for 69 yards on 16 carries.

Dominic Richardson actually led the Cowboys in rushing against TCU, a program he initially signed with out of high school. Richardson ran violently, hitting the truck stick a few times on route to his 134 yards and two touchdowns.

Then Nixon, the group’s true freshman, got in and ripped off a 63-yard touchdown run.

5. And All of That Is a Sign of Good Line Play

News came out before kickoff that Josh Sills, the Cowboys most experienced lineman, was going to miss Saturday night’s game. Then the group lost Danny Godlevske, the second-most experienced guy, shortly before halftime.

That group was still dominant even in rag-tag form, even in a second half where it was obvious OSU was going to run the ball in an attempt to run out the clock. OSU rushed for 447 yards and eight touchdowns in the game and 302 of those yards came in the second half.

There were myriad times where rugby scrums would form, and the Cowboys’ linemen would just push the pile forward for five more yards.

It was an inspiring outing for the group that included Tyrese Williams filling in for Sills and Joe Michalski filling in for Godlevske. After the game, Gundy said he thinks Sills will practice this week and that Godlevske should be back “pretty soon.”

Malcolm Rodriguez has cracked a list that has stood since Mike Gundy was still the Cowboys’ QB.

With his six tackles Saturday, Malcolm Rodriguez is up to 371 career tackles. He surpassed Sim Drain for No. 5 on OSU’s career tackle list. Drain got to No. 5 during the 1989 season.

Yes, COVID gave Rodriguez an extra year, but any time something happens for the first time since the Reagan Administration, it should be noted.

7. Gunnar Gundy Got in the Game

The OSU circa 1980s references don’t stop at Barry Sanders being honored or a Sim Drain record being broken. A quarterback with the last name Gundy and the No. 12 was taking snaps for the Cowboys in the fourth quarter.

Gunnar Gundy made his collegiate debut as a true freshman. Most of his time was spent handing the rock off the Jaden Nixon, Zach Middleton or Andre Washington, but Gundy did have a rushing attempt, gaining one yard.

“With Gunnar, I try to make decisions if he wasn’t my son, but it’s harder on him,” Mike Gundy said. “I’m harder on him. He’s last in line. He’s last in line to get reps at practice and out here. But then to a certain extent, you know, what would I do if he wasn’t my son? He’s earned his time. He’s earned his right to go in the game. I put him in, so I don’t want to ever punish him because of that. He gets punished enough because he’s my kid. So, it was his time. He was due.”

8. Blaine Green Is a Monster

It takes me a half-beat to realize what’s happening every time Blaine Green gets the ball.

Did a massive running back join the team? Did James Washington get out of Pittsburgh purgatory and somehow gain an extra year of eligibility? Oh, it’s actually just a 6-foot-1, 215-pound true freshman wide receiver.

Green caught all three of his targets Saturday night for 80 yards and a touchdown. Rocking Washington’s No. 28, Green’s touchdown was on a Washington-esque post route that he took 46 yards to the house.

Collin Oliver has 6.5 sacks this season after getting another Saturday.

Oliver’s sack total leads the team, and again, he is only a true freshman. He has had six sacks in the past six games.

Rodney Harding set OSU’s freshman sack record in 1981 with nine sacks. With at least three games to go for OSU this season, Oliver can surpass that total with a sack a game.

The Big 12 was wild on Saturday.

Oklahoma lost to Baylor. Iowa State lost to Texas Tech. Texas lost to Kansas (KANSAS, IN AUSTIN). Yet, the Cowboys played what was probably their best game of the season.

There’s the old saying that defense wins championships. The Cowboys are finding out why that phrase came to be. Not that the Pokes are a lock to win the Big 12 or anything, but OSU’s defense has provided the Cowboys with consistency in a season where consistency has been a dwindling resource throughout the country.

“I’m an offensive guy,” Gundy said. “We all know that. If it was up to me, we’d throw it deep 20 times a game. That’s just my nature, and we’d play fast. But we didn’t have that luxury this year. We’re just getting over injuries, and guys are practicing together. Spencer is playing better, I think. I haven’t watched the tape. He has because he’s with his wideouts now for like three weeks in a row. We didn’t have that. But defense can can create consistency.”