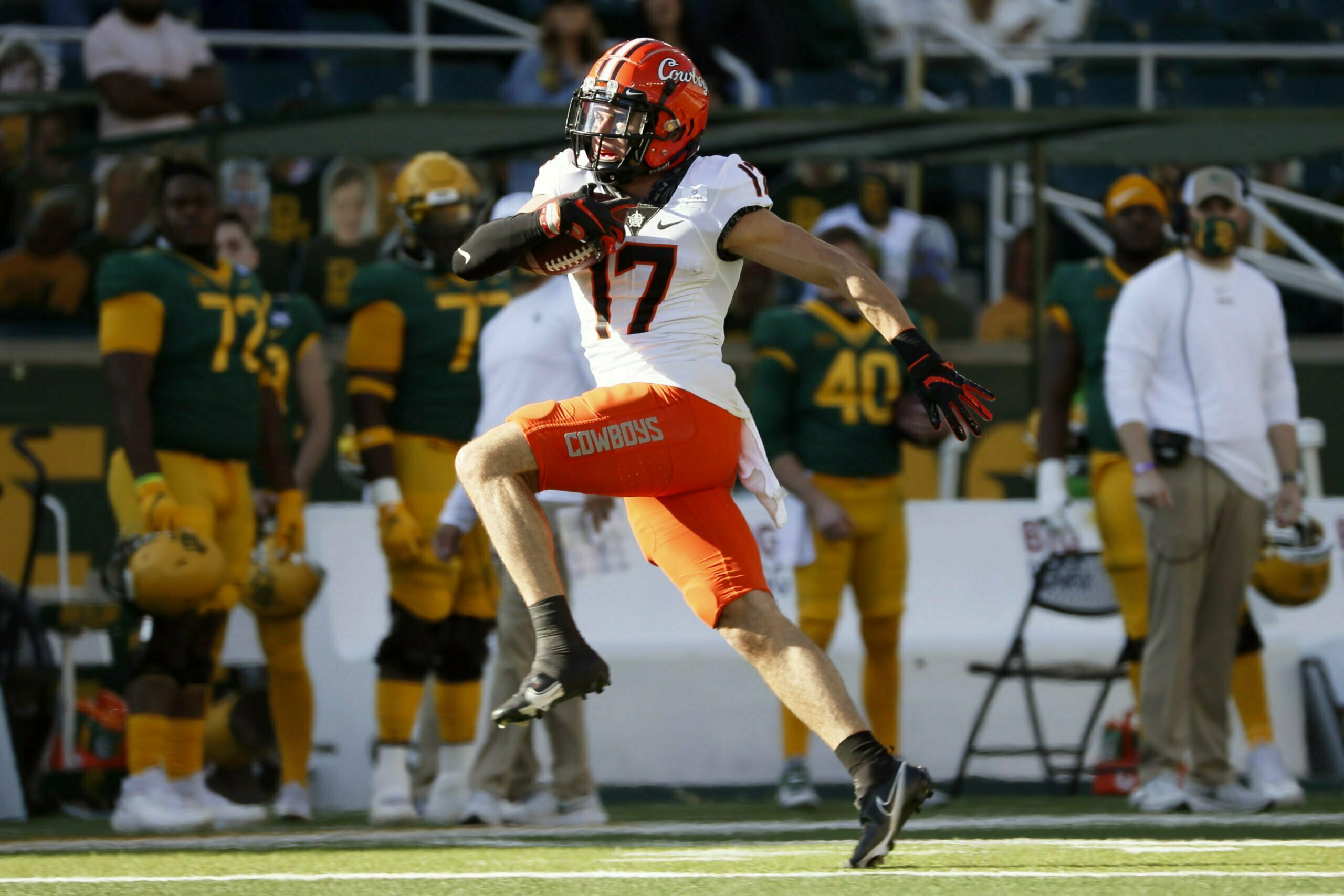 Oklahoma State capped its regular season with an emphatic win over a Baylor in a game that almost looked like it wouldn’t happen (and one Baylor now probably wishes didn’t).

On his first pass attempt, Spencer Sanders hit Dillon Stoner for a 75-yard score and the rout was on. The Cowboys just missed the shutout win with a late field goal on the Bears’ only drive that spanned longer than 22 yards.

Here are my 10 thoughts on the Cowboys’ big win over the Bears.

On the pregame show, Mike Gundy was quoted as stating that his All-American running back had “chosen to go the NFL.”

There’s already been a ton of hand-wringing and self-righteous grumbling about an amateur athlete who passed up A LOT of money last season to come back, played most of this one hurt (which no doubt dinged his draft case) and then made a money-minded decision for his future.

Agree with that decision or not, it’s his to make and trashing him is about as silly as it gets.

2. Baylor was beyond shorthanded

I’ll get all of these qualifiers out of the way now so that I can let loose with the rest of my thoughts.

If you’re a Baylor fan, you might be wondering why the Bears even played the game at all. The Bears had three (!) offensive coaches available with a first-year position coach on the field calling plays for the first time in his life.

The Bears were outmatched but showed up and competed anyway. You’ve got to give them credit for that.

2. Dillon Stoner fills in nicely for Tylan, and fits that role well

With Tylan Wallace out with injury, Dillon Stoner had a career game in just over a quarter.

Less than a minute into the second quarter, Stoner caught his fifth pass for his third touchdown and had a career-high, 173 yards.

Stoner ended the day with eight catches for 247 yards and three scores. I’ve been racking my brain as to whether Braydon Johnson or Brennan Presley would be the heir apparent as OSU’s deep threat, but I’ve been sleeping on Father Time.

I have no idea if he will come back for his 15th year at OSU — his option thanks to the NCAA’s COVID exemption — but if he does he’s a good candidate for WR1.

OSU scored six offensive touchdowns, the most all season, and averaged 7.9 yards per play — the most against a Division I opponent since 2017. Again, the Baylor caveats. But this was the same Bears defense that, a week ago, held Oklahoma to its lowest YPP average in five years.

Spencer Sanders was slinging the ball around, picking up first downs with his feet and the offensive line was pushing and protecting. Dillon Stoner went off, but Landon Wolf quietly had his biggest game in two seasons catching five of his six targets for 55 yards. And another running back had a coming out party.

I was not following Dominic Richardson on Twitter before this game started, but now he might be my favorite player. (I have several.)

Dezmon Jackson got the start, but got dinged up in the second quarter. He would return but the Cowboys rode their hot hand and Richardson didn’t disappoint.

Much like Jackson, who had a coming out part against Texas Tech, Richardson gave Cowboy fans a little hope in the OSU running game post-Chuba.

Richardson runs hard, has some speed, presents a homerun threat (with runs of 43 and 53 yards) and he’s only a freshman.

Two more interceptions and a look at the box score notwithstanding, this might have been Sanders’ best game of the season. He showed poise, used his wheels when he needed to and slung it around.

And neither one of his two interceptions was the type of OMG WHAT IS DOING??? pick that drives you up the wall.

I have no idea how tight the quarterback race will be in the spring but if you get mostly this Spencer and he can find a way to continue to develop and limit TOs, he’s a legit starting Big 12 QB.

This is what the Cowboys’ defense could have looked a little more like over the last month, if it had gotten some help from its offense.

I’m not saying Jim Knowles’ group was going to hold teams to 3 points on the reg, but it looks completely different when those big guys up front get to catch a breather instead of a quick Gatorade run before OSU’s next three-and-out.

7. Where have the Jelani Woods direct snaps been all my life?

If they aren’t going to throw it to their 6-7 tight end that used to be a QB, at least they let him take a snap.

OSU has struggled to punch it in in the red zone. Why have we not seen this before? I’ll defer to Dustin Ragusa on this one, but the dude is 6-7 and you signed him as a quarterback. You can give him the ball.

The Cowboys dynamic underclassman edge rusher went down in the waning moments of the first half with an apparent knee injury and was visibly upset.

Without reading too much into a tweet, it doesn’t look good.

We likely won’t know anything definite for a day or two but it’s a tough blow for one of the young leaders on OSU’s defense.

9. What this W means

The Bears have gotten the better of Mike Gundy’s team in recent history. OSU came in just 2-6 against Baylor over the last eight and had not won in Waco since 2009 (that was Art Briles’ second season).

Big picture, this win gives OSU the chance to finish 8-3 with a bowl win. As disappointing as this season has been, eight wins in a shortened season such as 2020 is not bad.

It would give the Cowboys a win percentage of .727 which is somewhere between nine and 10 wins in a normal, 13-game season. Here’s a look at where it would land among Gundy’s best years.

The win makes the Cowboys a likely selection by the Academy Sports + Outdoors Texas Bowl for the second straight year. The Pokes lost a tough one to Texas A&M at NRG Stadium last year, maybe they can get right against Arkansas or LSU.

For those wondering, OSU has only made consecutive trips to the same bowl once, the Gator Bowl in 1984 and 1985. I was an infant and neither Marshall Scott or Kyle Boone were a twinkle in their parents’ eyes. Mike Gundy hadn’t even made varsity at Midwest City High.