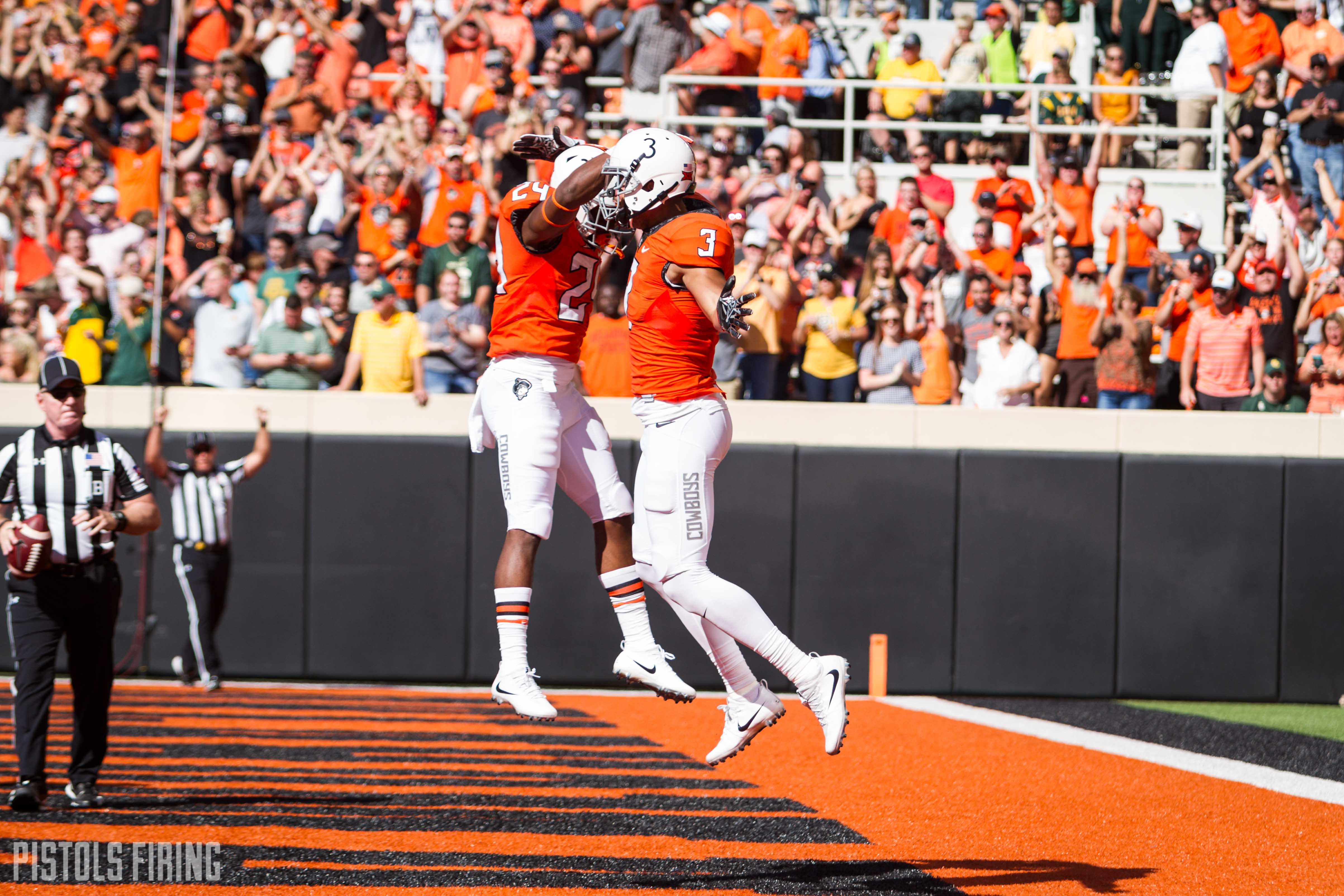 Oklahoma State rolled Baylor 59-16 as Mason Rudolph threw for 459 yards, Justice Hill ran for 117 more and Marcell Ateman and James Washington combined for 354 out wide. It was Oklahoma State’s first win over Baylor in nearly 50 months, and it touched off Rudolph’s tour of the Big 12 as he beat the only team that had eluded him in his career.

Despite the 747 offensive yards, though, it was the Oklahoma State defense that might have been the more impressive unit against the Bears. The Pokes allowed just 1.14 points per drive and held a Baylor offense (albeit not a very good one) to 4.7 yards per play over the course of the day.

All in all, Homecoming was a nice reprieve for the OSU faithful who had just sat through the first eight quarters of, well, whatever it was we sat through against TCU and Texas Tech to open the conference slate. OSU looked more like the team we thought it was after non-conference play, and while some of that has to do with Baylor’e ineptitude, some of it certainly has to do with the fact that OSU, at 5-1 at the halfway point of the year, is still very much a championship contender.

I don’t know if it was a change in philosophy, better execution or simply that Oklahoma State was playing an 0-5 Baylor team (now the best 0-6 team in the history of college football), but the Pokes’ defensive pressure was monumental to the way it handled this game.

And I’m not even sure that tells the story of how disruptive OSU was on the defensive side. Baylor’s quarterback Zach Smith (who just hung nearly 500 yards on OU) had zero time and zero clues what to do with what little of it he had. OSU limited Baylor to 7/18 on third downs and just 4.7 yards per play, its best mark in Big 12 play since it held Kansas to 3.8 yards per play in 2015.

Chunk plays were an issue — Baylor had eight carries of 10 yards or more — but I think you’re fine with that as long as they don’t score TDs in the red zone and you create disruption. As an outsider looking in, Oklahoma State has been so concerned in the past about giving up the big one that it has unnecessarily foregone putting pressure on opposing QBs and offensive lines. That’s wasn’t the case today … or maybe Baylor’s line just stinks (although it didn’t against OU!)

These two combined for 9 tackles, 2.5 TFLs, 2 forced fumbles 1 sack and 1 QB hurry and an indeterminable amount of pain for Smith on Sunday morning when he wakes up. Bundage might be the most talented player on Oklahoma State’s defense, but Phillips has proven this year to be probably the most productive. They covered more area than a Baylor tarp on Saturday in Stillwater.

Maybe the most improbable achievement by these two is largely rendering NFL talents like Chris Lacy and Tyron Johnson as non-factors for the OSU offense. These two got over half the targets and netted over 75 percent of the receiving yards on a day when OSU gained more offensive yards (747) than in any game in its history.

The President’s talents are obvious. He’s better with the ball in the air than maybe anybody in the country, and he has extraordinary spatial awareness when he’s locked into a spot over the middle.

Ateman’s beauty as a wideout is less cerebral and more pure brute strength. Covering him with one Baylor cornerback is akin to my three-year-old covering the Oreos from me after dinner. You can try it, but it’s so obviously and hilariously not going to work, what’s the point? No. 3 makes you think OSU could march up and down the field on 100 or so of the teams in the country only by tossing him jump balls on every play.

The show from these guys (as well as Justice, Jalen and J.D.) on Saturday led one of FOX’s announcers to make this assessment in the first half: “They have so many weapons, it’s almost a hindrance.”

4. Rudolph, not great but still effective

• How hilarious is it that we’re picking apart somebody who threw for 459 yards, 3 TDs and no INTs?

• How glad are we that this game came against Baylor and not on the road at Texas or West Virginia?

I thought Rudolph had one of the least viscerally impressive 450-yard games maybe in the recent history of college football. He sailed passes, underthrew them and generally was just not as ack-rut as he normally is.

Lacy and Washington both saved him from potential interceptions, and Ateman turned pass break ups into touchdowns. That’s the benefit of having professional football players lining up out wide.

I also thought Rudolph did a pretty good job of finding his single coverage and just getting it out there to let Nos. 28 and 3 do what Nos. 28 and 3 do. Will that work against OU or Texas? Probably not, but thankfully those teams were playing about 250 miles south of where Rudolph was on Saturday. And thankfully some of Baylor’s corners and safeties would struggle to start for East Dillon.

Hill went over 100 yards for the 10th time in his first 19 games as a college running back. By comparison, it took Joe Randle 30 games to do it. I realize Randle wasn’t getting full RB1 carries as a freshman in 2010, but that doesn’t mitigate what Hill has done.

I think sometimes we think of Hill as being automatic in the same way we think of Rudolph being automatic. Like, oh yeah those are just the kinds of RBs and QBs OSU churns out. Well, maybe, but I also watched the Daxx Garman-Desmond Roland era. Hill is special, and his 79-yard burner for six on Saturday was spectacular. 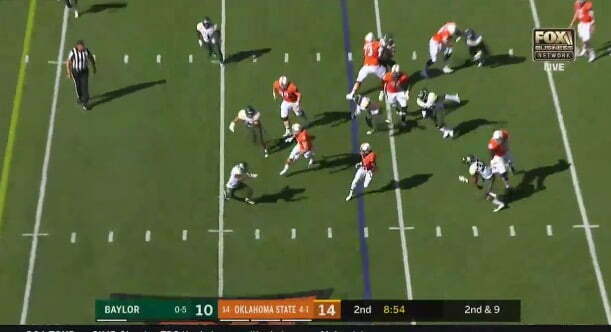 Tell me what part of this said, “Yeah, he’s going to find the end zone”? He had five Baylor players surrounding him and another two to get past down the field. An unbelievable run from an unbelievable player.

WATCH: Justice Hill gets a great block and takes off 79 yards for the score! #okstate pic.twitter.com/k4GNKcefI6

Bonus points for Marcell doing Marcell things down the field.

6. Momentum is so big

Think back to Baylor’s third possession. Oklahoma State had just gone three and out after Baylor opened the game with a score and had just given Baylor the ball back on a muffed punt at midfield. Baylor was staring at 14-0 halfway into the first quarter with the TCU game still fresh in everyone’s minds.

Who knows what happens if Justin Phillips doesn’t get that strip sack and Cole Walterscheid doesn’t recover. Instead, OSU goes on to score a touchdown on its next drive and never comes close to trailing again.

How about this? Baylor didn’t score a TD after its first drive, and Oklahoma State didn’t punt after its first drive. We’ll look at these more closely on Sunday, but holding Baylor to punt-fumble-punt-FG-punt-punt-half on its seven drives post-TD has to make Glenn Spencer want to smoke three cigars at once on his back porch tonight while also gnawing on a live boar.

Similarly, OSU’s only drives after the first one that didn’t end in a score ended in a turnover. Eight TDs, a field goal, two fumbles and a TO on downs. Fin. What a weekend.

I don’t get to write out my uni thoughts very much so I’ll say it here: Those helmets today were unbelievable. I’m going to quietly dispose of my post-season all-time helmet rankings because it’s become too difficult to rank them.

Nearly every helmet OSU has worn in the last four year (save the paisley bowling ball) has been perfect. Four straight Homecoming hits, and this one might have been the best of them all.

#okstate's last four Homecoming helmets have all been amazing. pic.twitter.com/psu30WIvx5

Also, the low-key best part of this year’s version? The O-State across the front just above the mask. Fire.

Maybe it’s just the social media world I live in (world we live in), but it always feels like there’s so much angst after plays, drives and games. After a muffed punt it’s, “been here before SEEN THIS MOVIE!” After an unsuccessful drive it’s, “I KNOW HOW THIS ENDS!” After a bad game against TCU it’s, “PROBABLY GOING 7-5 THIS YEAR.”

Three top 10 teams lost this weekend. Games are long. Seasons are forever. Oklahoma State still controls its own destiny for everything. Win out, and you’re in the College Football Playoff. Period. That’s it.

Is Baylor terrible? Probably, but it also came within one possession of taking mighty OU to overtime, and you made ’em look like Tulsa. Oklahoma State has a really, really terrific football team, and now it preps for the heart of the season with roadies at Texas and WVU and one for the flag at home against OU.

The season is halfway over, but we’re just getting to the best part of it all.