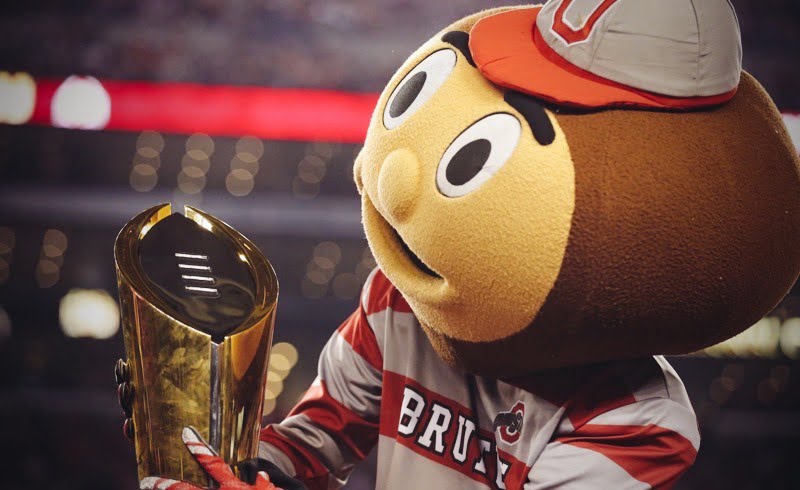 It’s nice to have a real reason to care about the College Football Playoff rankings this season, isn’t it? The first ranking was released on Tuesday and everybody  completely freaked out. Here are five thoughts I had about OSU’s ranking and the way everything is generally laid out.

1. What are the criteria?

It’s the first week of the second year of this whole ranking the teams thing and I still have no idea what the most important criteria are for a team. There was something on Tuesday about beating teams with better than .500 records which sounds a lot like somebody passed Jeff Long notes three minutes before he went on the air and said, “say this.”

The College Football Playoff committee is almost by definition making this up as it goes which was always going to be the problem with doing it like this. That’s fine, as long as you know the stakes going on. The better way to do it without the silliness of trying to compare different teams with different schedules that play a different number of games across different conferences? Win your conference and you’re in.

2. Why is OSU behind Stanford and Memphis? LOL, what? What am I missing here?

Oklahoma State has even had a better schedule than Baylor which leads us back to ranking by criteria other than wins (how dominant were you?) being the silliest thing in sports. I know this will sort itself out (kind of), but it’s still silly.

Also, this from committee chairman Jeff Long was pretty funny. “(Oklahoma State) scored against Texas Tech, but you know as we looked at other teams, a lot of teams have scored on Texas Tech. That wasn’t surprising.”

Berry Tramel wrote about this today and I agree. The perception of the Big 12 is that teams don’t play defense.

“I think it’s the balance of the team,” said Long. We have teams that are just one-sided offensive teams or one-sided, really strong defensive teams. That combination of offense and defense. How they’ve played offensively and defensively in those games. Sometimes that’s the hardest thing to judge…”

I mentioned this to Carson on our podcast on Tuesday, but the Big 12 is about to have a massive Notre Dame problem. There’s a long way to go, of course, but if ND can get through at Pitt, home for Wake (LOL), at BC and set up a final-week matchup at (presumably still-with-one-loss) Stanford then you’re setting up a scenario in which either ND gets in by winning that or Stanford or Utah get in because Stanford beat ND and one of them won the Pac-12 title.

That’s messy for the Big 12 because the SEC champ is almost definitely getting in. So is the Big 10. So is Clemson if they run the table. For a one-loss Big 12 team to get in, they need Notre Dame to lose soon.

5. No Big 12 team is going undefeated

I sort of came to this realization at some point last week. Everybody keeps talking about this amazing November slate that’s sure to determine the champion of flyover country and will vault the last man standing to the top of the national pile. This is all fine and good if the last man standing is without a loss. Surely that team will be No. 1 overall.

But the flip side of that is that when TCU loses in Stillwater and Baylor loses in Ft. Worth and OSU blows Bedlam and OU gets smoked in Waco you have enough of a mess on your hands that the committee will shrug its shoulders, say “you should get a secondary,” and slot four non-Big 12 teams in the Playoff.

6. OU has the best trajectory of any Big 12 team trying to get in

How about that? If we’re saying there aren’t going to be any undefeated Big 12 teams, OU sets up best for the Playoff because of its brand and because it would have beaten OSU, Baylor and TCU to end the year. That’s an auto-bid for a squad like OU even if it would have had the worst loss of any of those top Big 12 teams.

Do people really think there isn’t bias involved here? It’s natural. I’m not saying the committee is rigged, that’s silly, but there’s an inherent bias that ALL OF US have grown up with that says Notre Dame and Alabama are great at football. Baylor and TCU are not. There’s no other reason Notre Dame, Alabama and Ohio State are ahead of TCU. Have you looked at Ohio State’s schedule vs. TCU? TCU is on the left. Ohio State is on the right.

Do you think it would still be ranked outside the toHAHAHAHAHA. No.

Also, this is really true.

College football analysts operate from the assumption Alabama is the best team, and any data thereafter piggybacks that truth…

On ESPN’s post-rankings show Joey Galloway said, “the Big 12 has been in preseason up until now.” What? You mean Texas Tech beating Arkansas and OU beating Tennessee and TCU beating Minnesota don’t count? I don’t get why winning at West Virginia, Texas and Texas Tech is discounted so heavily. But then again, I still don’t know what the criteria are to begin with.

“I think if I was to say I don’t have any interest that that would be unfair. I think we all want to know what people think. But you guys that have been around me long enough to know, we have a pretty good barometer of our team, and as I said, we’re a good football team. So I think it’s interesting to look. People will want to know. They’re going to tell you anyway. My kids when I come home, they’re going to tell me, and people in the community tell you, so it’s worth looking at.” (Tulsa World)