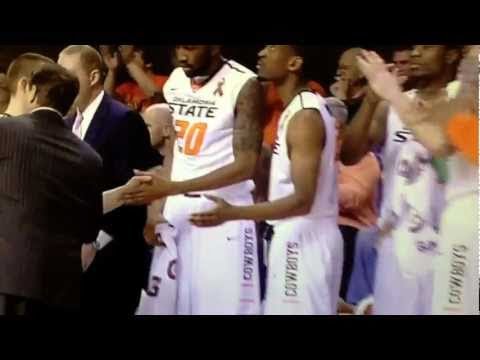 OSU thumped Tech in Gallagher-Iba today to move to 2-2 in conference and 12-4 overall. The game wasn’t all that exciting but I have a bevy of videos, tweets, and thoughts to liven it up for you.

1. On Smart’s foul trouble in the past few games: what are the odds that I (or someone associated with me) have given money to members of the Big 12’s officiating group to get Smart out of these games so NBA GMs don’t get a good look at him? I mean, pretty absurd, but definitely not off the table, right?

#OKState's half-court offense is solid until the entry pass is made into the block. Entire team stops and watches. Have to keep moving.

3. Pretty subtle move by ESPN to show Keiton right after they did a 30-second promo for Hinkle Fieldhouse. #ollie.

4. A few things on Forte: I think he’s the third best player on this team right now, and I’m not even sure it’s that close. Obviously everyone is in love with his shot but he does so many little things as well.

Prime example: Marcus Smart had a fast-break layup in the second half which, being Marcus Smart, he’s going to make 999 times out of 1,000. Still, there was Forte sprinting to the other end in case he missed…which he did. Forte grabbed the board and got fouled. You can’t teach that stuff……………especially if you’re Travis Ford.

6. One of my favorite moments of the game was Smart on the bench after he picked up his second foul. He ran down the line and high fived every player, coach, and manager (and there are a lot of them). I think that’s that “bench leadership” Dave Armstrong and Reid Gettys were talking about last week.

7. My other favorite moment of the game was Cobbins shaking Forte’s hand for an absurd amount of time (video below)…

8. Franny had some jewels today but my favorite was “OSU is sneaky long.” How — and remember I am not a basketball analyst, nor do I fancy myself one — does one become “sneaky long”? Is this an Inspector Gadget reference? Does he mean OSU’s players have grown since the last time he saw them? Is there an “overtly long”? I have so many questions, Fran, SO MANY QUESTIONS!

Eight points and nine boards for Mike Cobbins. Six points and 11 boards from Phil Jurick. #OKstate got what it needed from the bigs.

11 (bonus). Here’s one of Texas Tech guards summing up their day in one word: