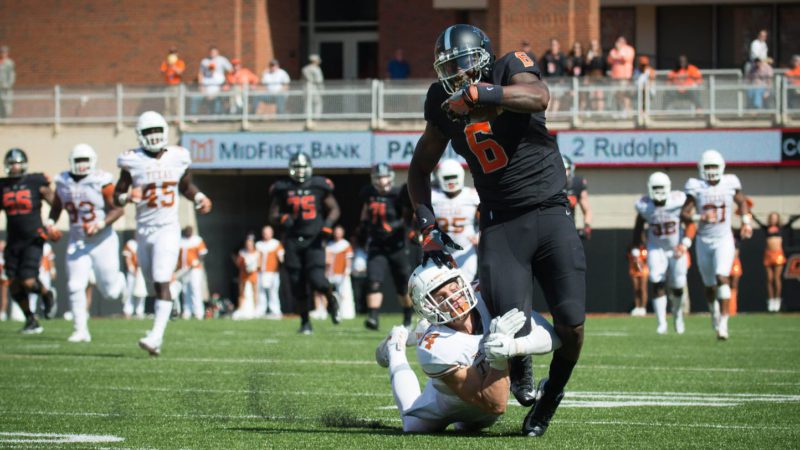 The Cowboy offense is poised for a big year in 2017. With Mason Rudolph returning to build upon his legacy at Oklahoma State and the skill positions chock full of talent, the Cowboys should have no trouble putting up points. But one underrated position group will undergo a complete overhaul this off season.

In the third year of the hybrid fullback/tight end position termed “cowboy back,” Oklahoma State will be starting almost from scratch. Blake Jarwin and Zac Veatch have exhausted their eligibility and the only cowboy back on the roster that caught a pass in 2016 is former wide receiver Keenen Brown who had two catches for 47 yards.

“[Jarwin] comes from Tuttle, Oklahoma. One of those guys that should have been recruited, wasn’t. He came in, we put him on scholarship,” said Mike Gundy after the bowl game. “We’re really good to miss him and Zac Veatch for what they bring to our offense. They’re good receivers, tough. They’re smart, understand our offense.”

But there is some depth on the roster. Let’s take a look.

Brown was a four-star wide receiver who made the move to cowboy back last spring after putting on an nearly 40 pounds. Listed at 6-foot-3 and 242 pounds, Brown is the perfect size to make plays in a tight end role. He even showed off his big-play ability with a 38-yard reception against Texas.

If Brown can be an effective blocker — an important part of what makes the position so versatile — he would be an obvious answer to replace Blake Jarwin in the starting lineup.

A redshirt sophomore in 2016 who saw reps sparingly in 2015, Frazier could possibly use the big turnover in the cowboy back group as a chance to compete for reps. At 6-foot-4 and 265 pounds he fits the prototypical tight end mold.

Another wide receiver who bulked up and made the switch in the spring of 2016, the Owasso, Oklahoma native put on 25 pounds in attempt to crack the rotation at cowboy back. He, like many of the cowboy backs on the roster, is somewhat of an unknown but, again, there will be plenty of reps to replace with the departure of Jarwin and Veatch.

The Cowboys have two incoming cowboy back recruits that could be in the mix for early playing time.

Finefeuiaki is a 6-foot, 245-pound fullback from the Santa Clara, California. Last season at junior college College of San Mateo, he rushed for 120 yards and a score and caught 34 passes for 495 yards and seven touchdowns. He’s shorter than what we’ve seen from the position so far but has the versatility to do all that position coach Jason McEndoo asks of him.

His biggest value will likely be stepping into the blocking role vacated by Zac Veatch, who was paramount in the improvement of Oklahoma State’s running game in 2016.

A two-sport star who did it all for Lehman High School’s football team last year. Henderson lined up at wide receiver, tight end, running back and even took snaps in the wildcat package.

Henderson’s senior season boasted 185 yards and three touchdowns receiving, 482 yards and seven touchdowns rushing. At 6 foot 4 and 225 pounds, he will likely need to put on a little weight to realize his potential as a starter but could be very well contribute early due to his athleticism and obvious versatility.

Check out Kyle Boone’s write up on Henderson.

Here’s how I see the 2017 depth chart shaking out.

It wouldn’t take much for Tyler Henderson to emerge as the a starter over Brown if he impresses early. Brown seems to have all the potential but has yet to see the field much the past two years.

I think Finefeuiaki is the most likely to play immediately given the Cowboys need to replace Veatch. Henderson and Brown should be top candidates to replace Blake Jarwin’s production.

The good news here is that Mike Yurcich and McEndoo have plenty of competition at an under-appreciated but very important part of the Cowboy offense.