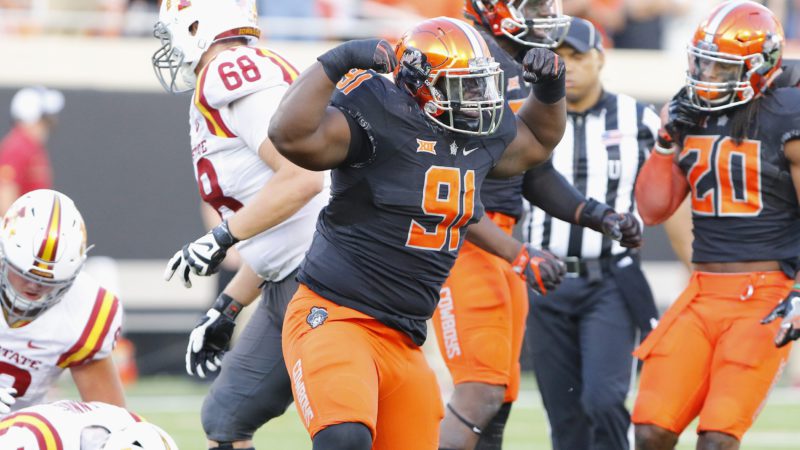 For the second straight year, Oklahoma State loses its best defender to an early NFL Draft declaration. Vincent Taylor will be playing on Sundays next year after one of the most impressive seasons Oklahoma State has seen from an interior defensive lineman. The Cowboys will also be without starter Motekiai Maile — an underrated force and two-year starter himself.

But defensive line coach Joe Bob Clements has shown his eye for talent and ability to develop his guys into real players. The defensive line is the deepest it has been in Gundy’s tenure and that has allowed them to absorb the losses of guys like Taylor as well as Emmanuel Ogbah the year prior.

That tackle depth includes Darrion Daniels who heads into his junior season with a chance to step right into Vincent Taylor’s vacated starting role. Daniels has seen the field since day one as a true freshman and has Taylor-like star potential. Along with Daniels, DeQuinton Osborne returns as a redshirt senior and should compete for starting role as well.

The Cowboys are bringing in two tackles by way of transfer — Snow College’s Fua Leilua and former Michigan State tackle Enoch Smith Jr who transferred and will be eligible immediately. Both should be instant rotation players and make an immediate impact.

The last couple of years have been rough for Vili Leveni. In two straight seasons he sustained injuries that sidelined him for the year. In 2017, the versatile redshirt senior will have one more shot to leave his mark at OSU. Leveni is listed as a tackle but has spent time at end as well. Wherever he plays, he makes an impact.

Cameron Murray got the benefit of a redshirt season in 2016 but the former three-star prospect form Bryant, Arkansas should be in the mix at the three-deep Oklahoma State would like to field at tackle. Taaj Bakari may also figure into the rotation, as well as Ben Hughes, a redshirt senior this fall who has seen most of his time come on special teams.

The lone high school prospect of the 2017 class is Bixby, Oklahoma product Brendon Evers — a three-star prospect who will likely redshirt in 2017. Here’s a look at a legit three-deep rotation the Cowboys should be able to field.

A great mix of experience and potential all put together by Joe Bob Clements — and Rob Glass. The interior of OSU’ defensive line is in great shape moving forward.