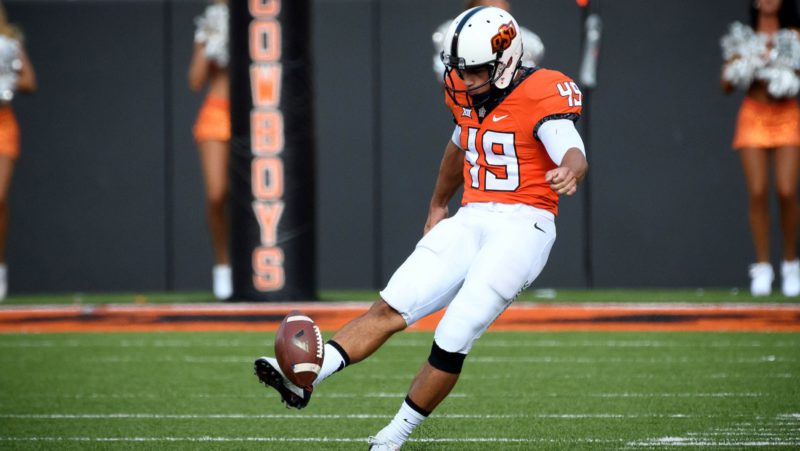 The Cowboys lose their all-time leading scorer in Ben Grogan, return the most effective punter in the nation and will have to find a new return man. Let’s take a look at where they stand when it comes to special teams in 2017.

As mentioned above, Ben Grogan has played his last game as a Cowboy. There are a couple options for his replacement in the place-kicking department. Matt Ammendola is heading into his redshirt sophomore season after taking over kickoff duties from Grogan last season. Ammendola did attempt one field goal in the Central Michigan game — which he made — from 53 yards. That tied the fourth-longest in OSU history.

Ammendola will have some competition for field goal duties. Incoming freshman Jake McClure comes in with an “NFL leg” per J.J. McCleskey (Jalen’s dad) who coached McClure in the Blue-Gray High School All-American Game according to GoPokes.

Ammendola should continue in his duties as kickoff specialist. As a redshirt freshman he came in and took over for Ben Grogan who turned his focuse solely to place kicking. Ammendola showed off his leg strength spelling a vast improvement in touchback percentage (47 percent) from the Grogan’s the year before (24 percent). More touchbacks equal fewer return opportunities for the opposition.

Max Allen is probably the best bet for backup on kickoffs. He got a few tries against SE Louisiana and Central Michigan — and apparently is ready for a bigger role as a sophomore.

Hopefully leaving the bench in 2016.. i'll miss it #NewYearsResolution pic.twitter.com/nUgkgkFuH1

Before we get to OSU’s super-effective punter, we would be remiss to skip the long snappers. Maybe the most unheralded position on the roster, these guys are very important and unfortunately don’t get much attention unless they make a mistake.

In 2016, redshirt freshman Sam Walkingstick took over to start the season in place of departed Josh Elias. Walkingstick appear in six games but traded off time with true freshman Tanner Morgan who took over for most of conference play and recovered a fumble against Iowa State. Walkingstick returned to his snapping duties in the Alamo Bowl.

As I mentioned above, Zach Sinor was one of the most effective punters in the nation as a redshirt sophomore in 2016. His ability to put the ball on the ground close to opponent’s end zone ranked Oklahoma State No. 1 in defensive field position. His job should be pretty secure.

Besides, he was the only punter on the roster last season. But in case a backup is needed, the incoming place kicker Jake McClure also punted in high school. All indications are that he will stick to kicking duties but it’s a possibility.

It should be noted that Sinor killed OU on Monday, too. The entire school.

Can they read though is the real question https://t.co/LxRMahFQ8C

Speed is great, talent is great. But the Cowboys have not had a real return threat since Tyreek Hill. The type of guy that you don’t hope makes a play — you almost expect to make a play on any given return.

With Barry J. Sanders having exhausted his eligibility, there will be a competition for kick returner. With the plethora of talent the Cowboys have to utilize — especially at wide receiver, it could be a number of guys. Jeff Carr and Chris Lacy each saw some reps returning kicks last year. In the past, the coaching staff has pulled several guys from different position groups for tryouts. Talk about a fun practice to watch.

Jalen McCleskey spent some time as the punt returner at the beginning of 2016 before Barry J. Sanders took over all the of those duties. He also was the main guy on punts as a true freshman in 2015. We’ll see if he gets the nod next year or if the coaching staff looks at it as an opportunity to get someone else reps.

There may not be much shuffling among the “specialists” next fall. As far as return men go, I think that’s pretty wide open at this point and wouldn’t even know where to start. Mike Gundy has made special teams a priority over his tenure at Oklahoma State. And we’ve seen more than once what a difference they can make.