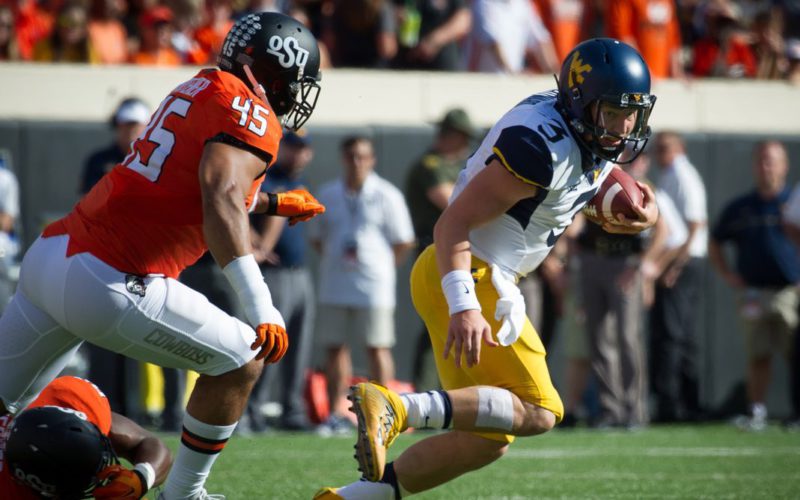 Let’s look at Oklahoma State’s linebacker group. They lose a couple of dudes in Jordan Burton and Devante Averette due to exhausted eligibility and some depth with Josh Mabin’s retirement. But Glenn Spencer has a lot of talent

The former Cal-transfer/walk-on has been a huge get for Oklahoma State. After Ryan Simmon’s career-ending injury thrust Whitener into a starting role, the soft-spoken sophomore made a name for himself in 2015 — including a 12-tackle, two-interception torpedo of Trevone Boykin’s Heisman hopes. In 2017, he has a real chance to be a superstar in the Big 12.

Phillips saw meaningful playing time as a true freshman in 2014, including at 10-tackle outburst in that Bedlam win before redshirting his second year. In 2016, Phillips’ role increased and he should continue on that trajectory heading into 2017. In the Cowboys’ second-straight walloping of TCU, Phillips contributed with five total tackles, half a sack and an interception. He should be a key cog in Glenn Spencer’s rotation.

The 2017 redshirt senior has spent most of his time on special teams but with the loss of Burton and Averette, Akem will have the opportunity to compete for a starting role.

A highly-touted recruit from Edmond-Santa Fe, Bundage saw playing time as a true freshman last season. He earned a reputation for forcefully dislodging ball carriers’ mouth guards. By the end of the season, Bundage was in the two-deep behind “star” linebacker Jordan Burton who has exhausted his eligibility. Could Bundage be in the mix for a starting role?

A two-year contributor on special teams who could figure into the mix for playing time on defense as well.

As a redshirt freshman Henry made some plays from the “star” linebacker position in 2016 including an interception against TCU. He’s in line for an increased role in 2017.

After a redshirt year in 2016, Harper will have a chance to compete for reps this spring, possibly at the “star” linebacker spot.

The second cousin of Emmanuel Ogbah and No. 1-ranked middle linebacker from Alberta, Canada spent his first year in Stillwater redshirting but with some room opening up at the top of the depth chart, Ogbongbemiga will be looking to crack the rotation. Go ahead and start practicing saying his name now.

Patrick Macon – At 6 foot 3 and 235 pounds, this guy is ready to come in and play now. Macon was the 4th-ranked juco inside linebacker in the nation last season and led all defenders (FBS included) with 27.5 tackles for loss. As an early enrollee, Macon will get to go through spring practices and the offseason workouts with the team.

With the departure of Devante Averette, Macon can use this spring and offseason to make a bid for a starting spot opposite Chad Whitener.

Brendan Vaughn – Currently the only high school prospect at linebacker in the 2017 class. Vaughn was somewhat of an unknown when Glenn Spencer and Co. extended an early offer but was able to showcase some of the attributes that OSU coaches liked finishing 3rd in Nike+ rankings at a regional camp last year. He’s currently a three-star prospect per 247Sports.

Macon was brought in to play immediately. Get used to hearing his named. If Bundage doesn’t start initially he’ll definitely be in the rotation. With Burton gone, that “star” position is his for the taking.

It should be a fun year. How much longer until September?