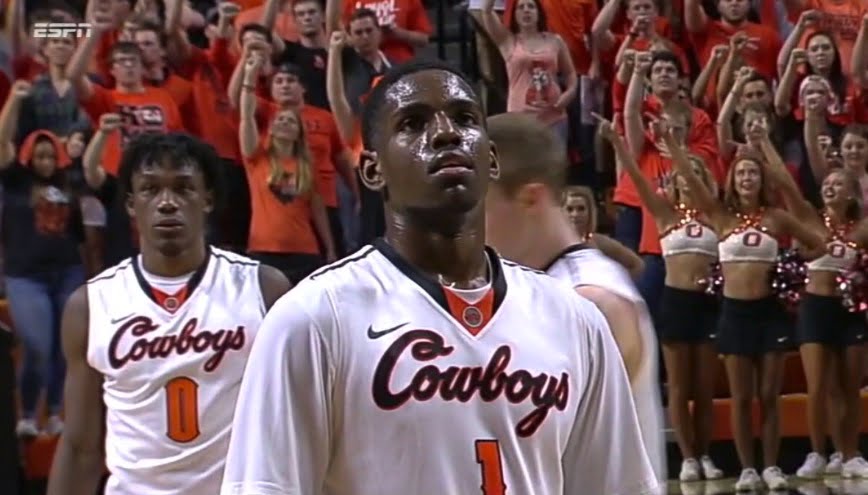 Jawun Evans snatched victory from the clutches of defeat on Saturday night, bringing the Oklahoma State Cowboys back from 14 down to beat the Rival Oklahoma Sooners.

Evans went for 27 points (22 in the second half), 9 assists, and scored 16 in a row down the stretch, cementing his place in Bedlam lore. OSU was down four when he started his streak with 6:30 left. They were up one when he was done. Step back jumpers, contested 3′, weaving in and out of traffic, finishing at the rim over the athletic Sooner bigs — we got the entire Jawun Experience on Saturday.

Get that closer his cup of joe.

“I like big games like this,” said Evans. “Rivalry games. I live for it. It’s what I wake up for every day. Basketball. Rivalry games. Big games.”

Underwood loved it too, of course.

“Best player on the floor,” Underwood said after the game. “We isolated him in a bunch of different spots and let him go to work. It wasn’t one of his ideal games but that shows his true character.”

All-time OSU 3-point leader Phil Forte, scoring 22 points in his final Bedlam matchup, was impressed by Evans’ work down stretch as well, in allusion to Evans’ 16 points in a row.

“That doesn’t surprise me,” said Forte. “Wow. I didn’t know that either. It’s impressive.”

If No. 1 does leave Stillwater after this year, it will have been quite two game career against Oklahoma in Historic Gallagher-Iba Arena:

Jawun Evans in home games against OU for his career …

No one would be happier to see Evans leave for the greener pastures of the NBA than Lon Kruger, who watched Evans lead his second improbable comeback win over the Sooners this year. Kroger had this to say about Oklahoma State’s point guard.

“He made some mid-range jumpers, made some 3s,” said Kruger. “He is a terrific player. Our guys, well, we didn’t have him under control by any means, certainly we didn’t late. he made the plays he needed to late. But really good players do.”

In his career, Jawun boasts the following averages against Oklahoma: 31 points per game, 5.6 assists per game, 4.3 rebounds per game, and a 2-1 record. Flex on ’em.

“Having that confidence in myself and knowing that I can make the shots,” said Evans after the game. “I have been working on it by being in the gym. Shooting reps, reps, reps and it finally just came. I was so involved in the game that I didn’t know that. I was just playing and just trying to get the win.”

After lighting the non-conference portion of the schedule up, then stumbling a bit (as the rest of the team did) to start Big 12 play, Jawun Evans is closing out the Big 12 slate in style.

Evans (18.5 PPG, 6.5 APG in the Big 12) joins Lonzo Ball of UCLA, Dennis Smith at NC State, and Monte Morris at Iowa State as the only players in college basketball to average at least 16 points and 6 assists in conference play.

Evans is one of the most electric guards to ever come through Stillwater, and Saturday night was just another feather in his cap.