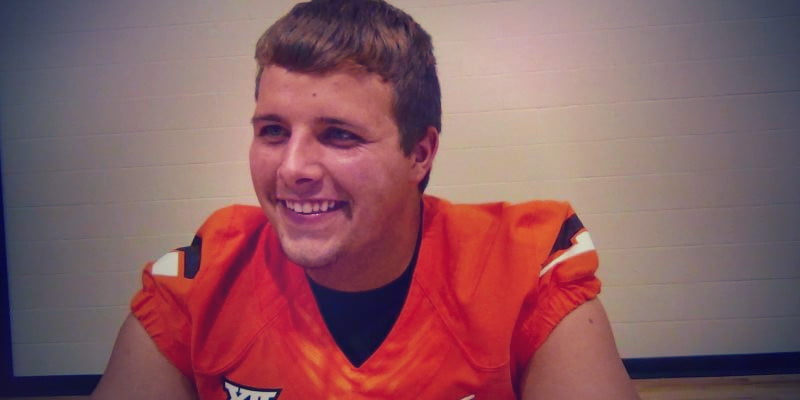 This week, Mike Gundy revealed the only true freshman we can definitely expect to see playing this season. Here are five redshirt freshman candidates to keep an eye on who I expect to break into the rotation this season.

Galeai is a 6-foot-5, 325 lb. offensive guard who should be in line to see some rotation this season. Galeai chose Oklahoma State partly because of his relationship with defensive tackle Vili Leveni, and is one of several Polynesian players on the OSU roster. With a body that size, he could (should) break the rotation in what will be a more experienced offensive line this season.

Yes. A punter made the list. With the departure of Kip Smith, Sinor is the projected starter at punter. The importance of the punter can’t be overstated. If the punter can pin an offense deep, the defense will have much more room to work with. Spencer’s ‘bend don’t break’ defense can’t be useful if the opposing team starts in Cowboy territory. As a redshirt freshman, a lot of pressure will be on Sinor to make sure that doesn’t happen. “He’s (Sinor) is a lot like the defensive tackles. We’ll know more about him in the middle of October,” Gundy told The Oklahoman recently.

Owens was listed as an “athlete” coming to Oklahoma State last season, and played primarily at running back for Palestine, Texas – a high school that has produced some pretty decent prospects. (Looking at you, Adrian Peterson.)

Owens was originally committed to TCU before making the switch just weeks before signing day in 2014. He has already gained some praise from Gundy. “…you see guys like (Jarrell Owens) — he’s a freshman. And then look at this guy over here (Ogbah). That’s what’s rushing the quarterback. That’s what makes me feel good. Being on the offensive side my whole career, I know that those guys can cause some issues. I like how active they are,” Gundy told the Tulsa World.

Brown was one of the prized recruits of a very talented wide receiver bunch in the 2014 recruiting class. “Obviously he’s got crazy size,” quarterback Mason Rudolph said. “He’s real stout and he’s real tall. He’s got great leaping ability and he’s gotten a lot more mature. You can see it. He’s made big strides this spring,” Rudolph said of Brown to the Tulsa World.

Frazier is vying for playing time with Jeremy Seaton, Blake Jarwin, and Zac Veatch. However each player brings different strengths; Jarwin is a natural tight end, Seaton is more of a fullback, and Veatch was recruited from Broken Arrow as a tight end, and played some on the offensive line last season. Frazier has put on over 25 pounds since entering the program last season and stands at 6-foot-5, 255.