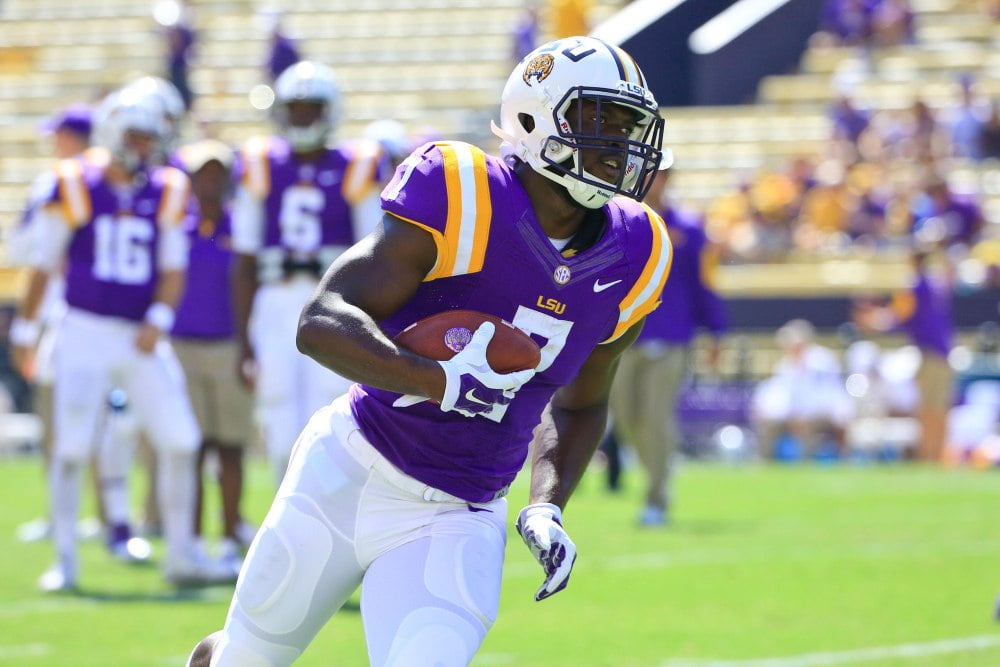 Porter: What else did you guys see that you liked nationally this year?

Southwell: Nationally, I was really impressed with a lot of the stuff North Carolina was putting together. Their field art was incredible also. Carson: I noted on Twitter if North Carolina was a better football program their uniforms would be considered the best, or at least top five. That argyle pattern they borrowed from the basketball team is incredible. These helmets are awesome, too. Great work from Fedora’s boys. As far as nationally, here’s four of my favorite combos in no particular order:

1) Ole Miss. Nobody, and I mean nobody, does tri-color better than Ole Miss. They invented it. Bonus points for the helmet being a throwback. 2) LSU’s purple jerseys are just the best. I would wear them more. The white helmet & pants is a pristine change of pace. 3) Texas Tech’s throwback uniform is better than any of the current monstrosities Under Armour gives them. 4) Boise State is right there with Oklahoma State in the uniform pantheon. I would rank them both just behind Oregon, who had a down year this season. Porter: For some reason, UNC works better in hoops than football. I do like that chrome helmet, though. One of the few I’m a big fan of. Before I get to what I liked, you know who’s sort of secretly been awful with uniforms over the past few years? OU. I’ve praised the Sooners enough for enough things this year, but their Indiana replicas have to go. It’s an embarrassment to Nike and the Big 12. Baylor continues to rock the uni dept. (much to my chagrin). As I told Carson, I was a big fan of the black-white tOSU-Penn State matchup earlier in the season. Oregon might have had a down year but they could put the Duck logo on my kids’ diapers and I’d get a little weak in the knees. Their template is peerless. Clemson can ball with LSU when it comes to purple, Carson. LSU purple vs. Clemson purple is right up there with Georgia red vs. Nebraska red for best color vs. color matchups. Speaking of Clemson, the Domers don’t do anything flashy but their colors have felt a twinge different of late (which I love). I might not care for ND as a squad, but those unis are world class.

Southwell: Completely agree with your take on OU, Baylor, and ND. Clemson could mix it up a little bit; lots of untapped potential.

Syracuse is getting better use out of their orange and blue. Tennessee had a slight improvement with the design and smokey gray alternates. Similar to when OSU wore Icy Pete, Texas A&M had a good concept but came up short. Carson: Oregon did have a down year, but one thing I love is they tease next year’s uniforms in the bowl game. This season is no exception.

Oregon changes their jerseys/pants every season and I wish Oklahoma State did something similar. I know Oregon is basically a Nike factory disguised as a University, but it’s time for OSU to change it up the jerseys/pants next season. The helmets are immense, just need to update the rest.

Southwell: I’m ready for what Oregon will be dishing out next season. It looks like they’re ready to bounce back from a down year. Better to have a down year than to have a down decade. UCLA actually improved on its black uniforms from a season ago, but these are still awful. Here’s a view of their laughable shoulder stripes: Colorado moved away from their sleeve stripes, but they’ve got some good options to choose from.

Speaking of gray and gold, Baylor added some gray this year. The helmet and pants looked pretty cool, but their gray jerseys had gold numbers – yikes. I wish Oklahoma State would have worn the gray jersey one more time this season. I felt like we were snubbed on one of the best combos: B-G-B. However, if they change to a new uniform next year, I’m sure I’ll love it just as much.

There’s no question that OSU is leading the nation in the helmet game, but I think they can run away with it by adding a few more variations of the OSU brand logo. A new uniform template will work better with the increasingly popular helmet stripe.