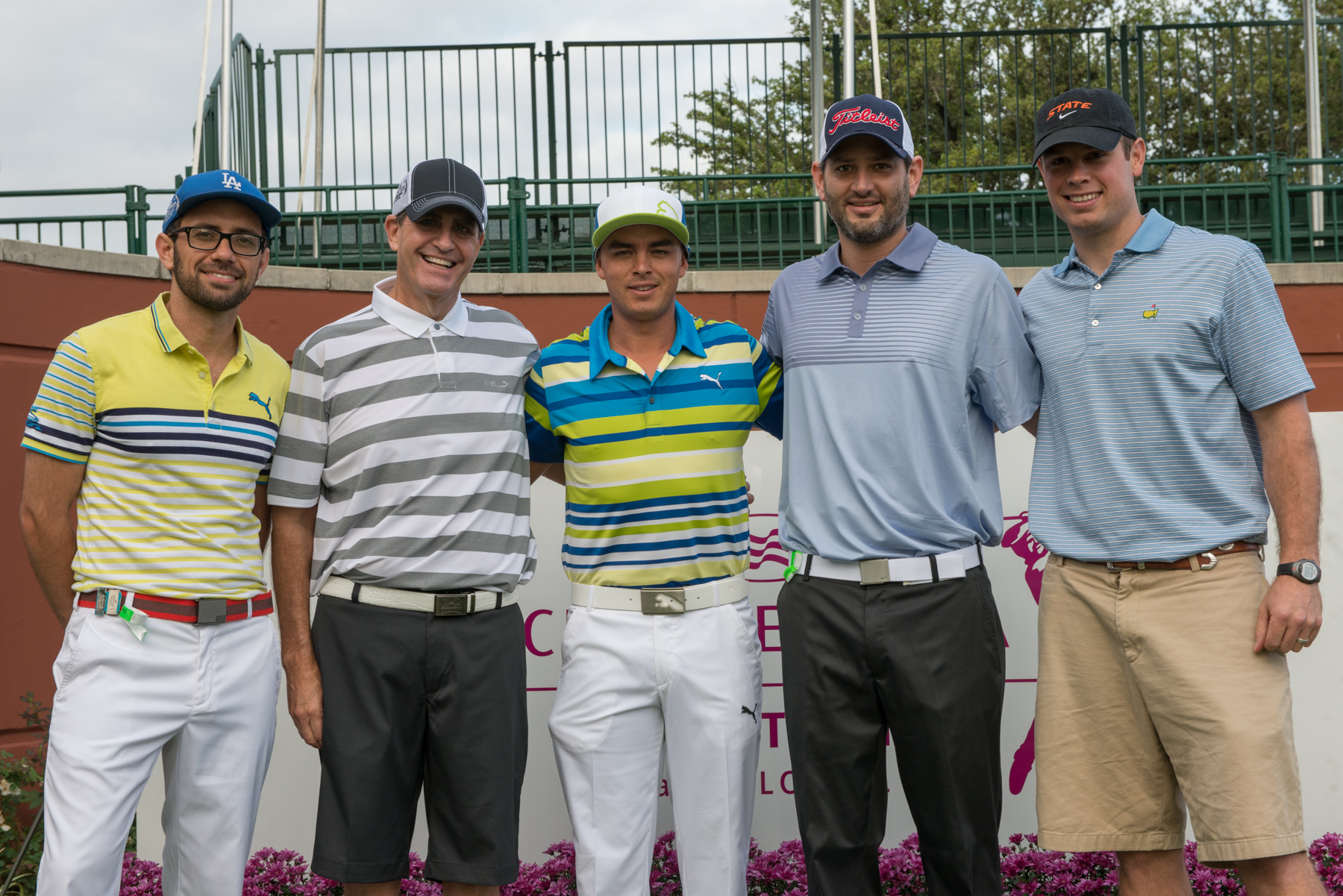 I wrote a piece for CBS Sports about a round of golf I recently played in the Crowne Plaza Invitational pro-am with Rickie Fowler. You can head on over to CBS to read the full piece but I wanted to jot down a few leftover notes that didn’t make the piece.

• I didn’t make enough of how much fun it was to be inside the ropes with a gallery even if only my wife was there to see me. It seems obvious but the difference between that and playing alone or with a buddy at Lakeside is just enormous.

• My caddie was McAlister High School star John Sheets. He’s about a 5 handicap and he was just immense on the bag. I think I threw him my ball to clean it on the green about 39 times in an 18-hole round. He had to wear the bib with my name on it and everything. I texted Nolan that part and he texted me back (from Australia) “what a bi***!”

• Honestly, teeing off on the first hole felt like what I imagine it feels like to play in a Ryder Cup. My knees were jelly. All I could think was “don’t whiff, don’t whiff, if you whiff Sheets will never talk to you again and for that matter neither will Fowler. Just don’t whiff.” Thankfully, I didn’t.

• Here’s how scoring works: Fowler and four amateurs are all vying for the lowest score possible on a hole that you take as your team score. I put my handicap at 20 so I get a stroke per hole and two on the two hardest holes. So if Fowler and I both par a hole it’s actually a birdie for our team because of my handicap. Fowler made a real eagle on the first hole. We finished 17 under and won by three.

• Another great exchange we had was on this 200-yard par-3, the eighth hole. I wanted to hit a 6-iron but Sheets talked me into a 5-iron. I hit it a little left but pin high. I handed my club back to him and said “good call.” “I know,” he said, “this is what I do.” He also told me he walked the course at 4 AM before our 8 AM tee time. I asked for a yardage on one hole when I was like six paces into the rough. He looked at me and said “I only walked the fairways.”

• I asked Fowler if it’s hard to go from the team concept at the NCAAs to the lone wolf-ness of the PGA Tour. “As far as being on the road by myself, it never really feels like that unless you really want it to,” he said.

“If you want to be on your own, go order room service and kick back and be on your own you can do it. But it’s not hard to find guys to have dinner with whether it’s your caddie and friends or some other young guys on tour. (Cameron) Tringale lives with me in Florida. We play a similar schedule to Morgan (Hoffmann) and Kevin (Tway). Bud Cauley, all the guys who played at Georgia — I think there are four of them that I played against on tour. There’s no shortage of guys and buddies to hang out with.”

• Fowler’s caddie — Joe Skovron is a tremendous dude. He introduced himself to all 52 people in our group on the first hole and chatted it up with anybody and everybody. He has a good job and you can tell he appreciates it. We even talked OSU football for a while — he wanted to know about the APR stuff and I wanted to know about the pins at Augusta. Good times.

• Skovron was also very vocal about the fact that Marcus Smart should have been suspended for the season. Neither of them knew about PFB but we talked about it a little bit.

• I didn’t have the stones to ask Fowler about his money games with Phil, DJ, and Dufner. I wish I would have.

• On the final hole I was in the sand just right of the hole. I was trying to get up and down for par (a birdie for our team). There were probably 150-200 folks around the 18th green waiting for Fowler’s autograph. I looked at Sheets. “If you hole this out I’m going to tackle you into the sand,” he said. I caught it perfectly, put a finger in the air and started walking it off. It lipped out and the crowd groaned. I was loving it.

• Del Frisco’s was catering food on the course while we were playing. It was a little different than the cart girl at Lakeside tossing me a Powerade.

• I was borderline power walking the first four holes of our round. You don’t want to be the guy who’s holding the other guys up (especially the pro) so I was hitting it and basically running after it. On the third hole I hit a tree and it went backwards about 30 yards. I was hitting my third shot from about 100 yards behind Fowler who had his hands on his hips. It was 74 degrees and I was sweating like Serge Ibaka after four quarters against the Spurs.

• On the second hole I had about 20 feet for a birdie (eagle for the team). I read it to break right like a cup and a half and I was feeling cocky because I was the only one in our group on the green in two. I looked at Fowler. “It’s going to go left at the end,” he said. “Really?” I asked. He just stared at me. It went left at the end.

• Everything I wrote in that CBS piece is how I feel. It wasn’t a puff piece or anything like that — Fowler’s as polished and as professional as they come. I watched other pro-am groups where the pro would shy away from the amateurs but Fowler was mixing it up with everybody — talking to us about whatever. Color me impressed.

• I still can’t do the wardrobe or the flat bill. That’s fine, though, millions of other folks can.

• Fowler hits it like a boss. I told Sheets the biggest difference between those dudes and amateurs is that amateurs are just trying to hit it straight. A decent amateur’s mistake is mis-hitting it left or right. Those guys’ mistakes are almost all strategic — didn’t pick the right line, didn’t read the wind correctly, etc. It’s a different sport.

• One of the guys in our group was a lawyer from Ft. Worth who is a member at Colonial (second from the left at the top). He hits his driver about a buck forty-five downwind but he’s never in the rough. I think he out-scored me. He was the man.

• One final Sheets exchange. I yanked my drive about two holes over on the ninth hole — just an embarrassment, really. We were walking towards it when Sheets tosses me a club and heads towards the green. “You’re on your own, dude. I’m not going to be embarrassed walking across the ropes like that.”

• I’ve felt a little guilty propping up this event like “look at me, I got to do this awesome thing” but it really was one of the coolest days of my professional life. I don’t take for granted the ways in which I’ve been blessed with a job I love and I appreciate everyone who has read this blog. Without this blog there’s no CBS job, no round with Fowler, none of it.