Allie P. Reynolds Stadium will play host to an NCAA Regional tournament this season, with Nebraska, Cal State Fullerton and Binghamton coming to Stillwater to take on the Cowboys. The winner of the double-elimination bracket goes on to the Super Regional to face the winner of the Corvallis Regional, which hosts UC Irvine, UNLV, North Dakota State and the No. 1 overall seed Oregon State.

We can get into the politics of the NCAA and how the committee seems to have something against the Cowboys no matter what sport we play, but I’m going to take the side of the Big 12 Player of the Year Zach Fish:

Thank you NCAA for the motivation! We are not an underdog. We are the Big 12 champs. We will take care of business in Stilly. #FearNoOne

That being said, the Stillwater Regional will still be one of the toughest in the country.

The Nebraska Cornhuskers (40-19) are the No. 2 seed in the Regional, and should be a familiar opponent for Cowboy fans. The former Big 12 member lost in the Big 10 title game to top-seeded Indiana, and visit Stillwater having won 25 of its past 31 games. The 40 wins are the most for the Nebraska program since 2008.

The No. 3 seed is the Cal State Fullerton Titans (32-22). This tradition-rich program has four national championships and hasn’t missed the postseason since 1991. The Titans finished fourth in the Big West this year, and ended the regular season winning seven straight games.

The Binghamton Bearcats (25-25) are the No. 4 seed in this Regional. The Bearcats qualified for the tournament by winning the America East tournament title in extra innings last weekend. The small school from Vestal, New York, comes to Stillwater having won five of its past six games. 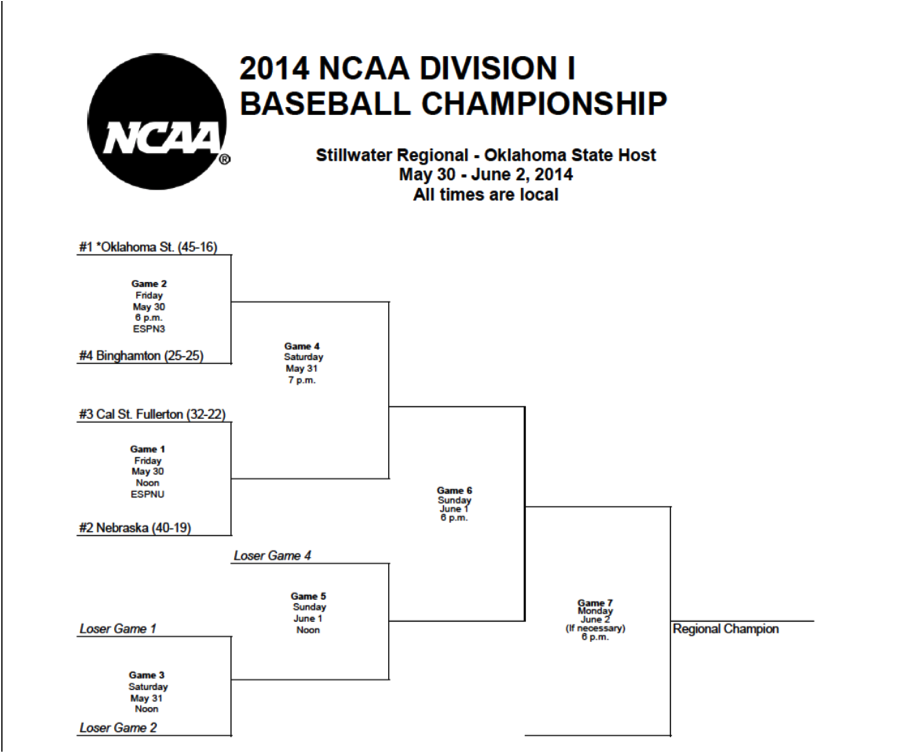 The Regional starts Friday at noon, with Nebraska facing Cal State Fullerton. That game will be featured on ESPNU. The Cowboys play Binghamton at 6 p.m. Friday, and that game can be seen on ESPN3.

The two losers get the first game on Saturday at noon, with the loser of that one going home for the rest of the season. Friday’s two winners play Saturday at 7 p.m., and whoever wins that advances to the Regional championship game.

A second team will be eliminated Sunday at noon, with the winner advancing to the Regional final Sunday at 6 p.m. The if-necessary game will be Monday at 6 p.m. TV designations after Friday’s games are still to be determined.

Tomorrow you can look forward to a more in-depth look at the three other teams in the Regional, and on Thursday you’ll get the Regional predictions.