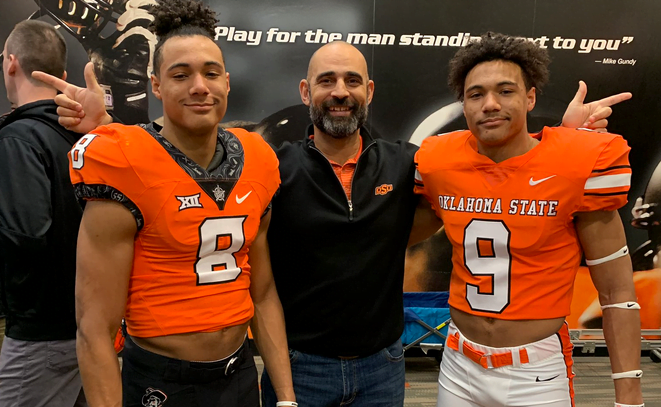 While the 2021 recruiting class is slowly beginning to take shape, there are still 20 or so spots available in the class and a lengthy list of targets who could soon fill those vacancies.

The Oklahoma State staff will balance those needs and juggle their board as the landscape shifts and more players emerge on the radar and others pop off it by committing elsewhere. But in a perfect world, every top target would head to OSU and turn down other opportunities.

Here is, theoretically, what that perfect world would look like — a wish list of four players (and a set of twins) that would be a huge, well, boon to the staff.

The twin pass-catchers from Allen, Texas are top-350 recruits who could give OSU a massive boost in the receiver recruiting department. Both are (roughly) 6-1, 200, and could fill two voids at receiver as OSU looks to replace several players either to transfer this offseason or to graduation after the upcoming season. OSU appears to be in good position to land both — and perhaps soon.

With Oklahoma State familial connections, Aden Kelley himself is considering following in that same path. The Thomas-Fay-Custer defensive lineman tells me he plans to commit sometime between now and football season, and OSU is battling here against Nebraska, TCU, Iowa State and a handful of others. My read on the situation is OSU has a slight edge over TCU but that he hasn’t completely decided yet.

A tall and rangy linebacker from Louisiana whose offer sheet is larger than any on this list. OSU already holds one commitment at outside linebacker in Kolbe Fields (and another LB/DE commitment from Collin Clay), but he’s highly regarded in particular because of his versatility and mobility. Rushes off the edge like a defensive end, moves like a safety. Trace Ford-like caliber player who would fit OSU’s system like a glove.

Another outside linebacker recruit here, this one from Del City in Oklahoma. Stephens was at one point considering a commitment earlier this spring between OSU, Texas Tech and Baylor, but he’s hit pause on his decision indefinitely.

A two-way impact player for Tulsa Union, AJ Green is a potential defensive back at the next level because of his speed and shiftiness. I think he’s the best prospect in the state of Oklahoma. OSU is in the mix, too, with OU, Arkansas and Michigan all vying for his commitment.