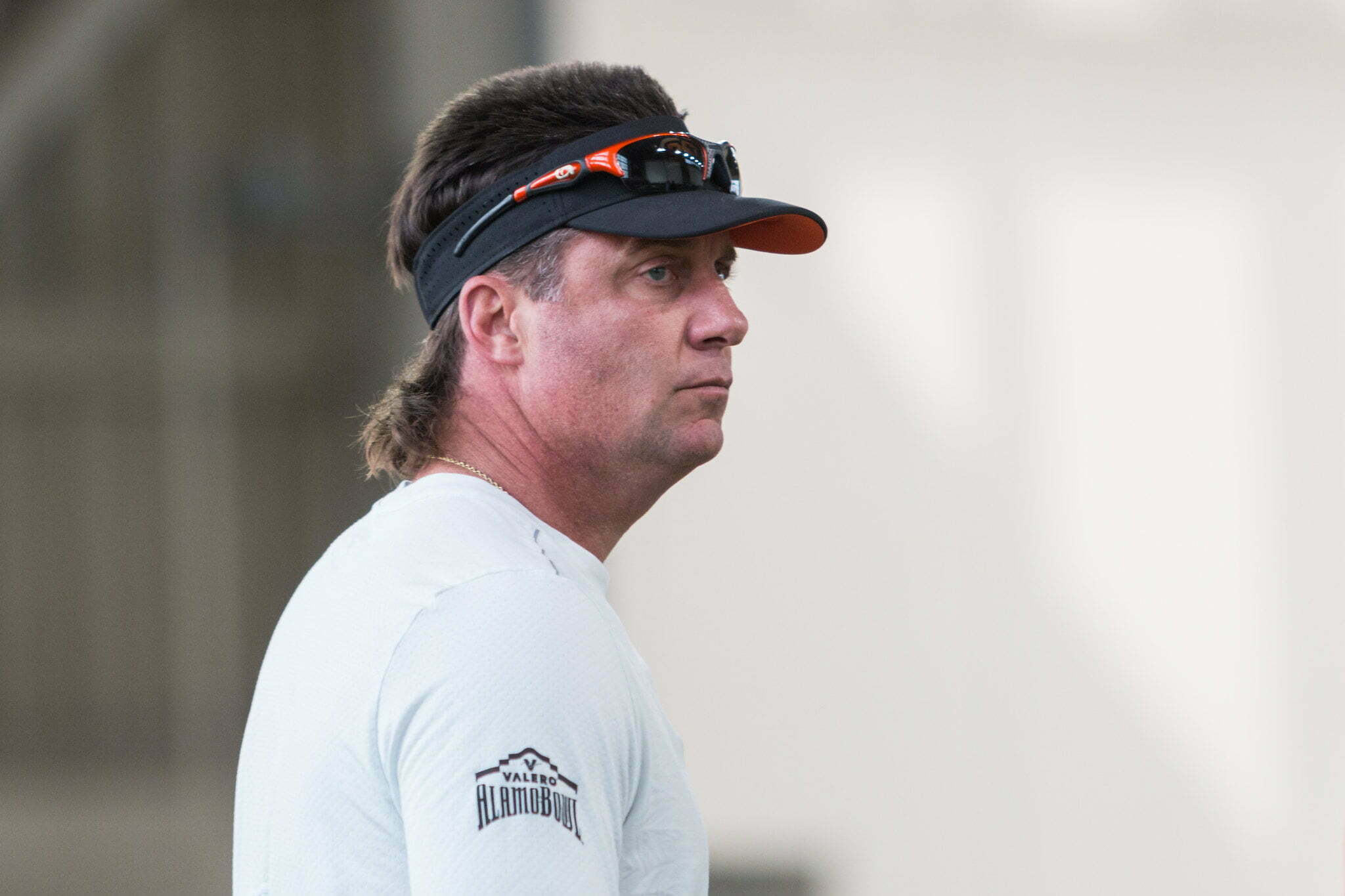 Mike Gundy is and always will be the best college football coach in Oklahoma State history. He will never be surpassed because of how uniquely he came to — and existed within — the only head coaching job he will ever have. To replicate the 15-year run Oklahoma State has had would be close to impossible under a single coach in the future for OSU. This is, without a doubt, the golden era of Oklahoma State football.

This plays itself out in all sorts of ways — a less-than-enthusiastic mindset on the recruiting trail, snide commentary in press conferences about how soft modern players (his players!) are and a general attitude that he was bulletproof no matter what he said or did, which was mostly true. Until it wasn’t. Until Chuba said it wasn’t, that you don’t just get to do or say whatever you want with no accountability. Again, this is not about a shirt but rather about living out what Gundy has undoubtedly told his players a million times — that you are responsible for what you say and do and that that is a reflection (for better or worse) of Oklahoma State.

“I think [what Chuba did] should be commended,” said OSU athletic director Mike Holder on Friday in a press conference. “I think all the players should be commended for having enough courage to speak out. We need more of that in society, not less. That doesn’t mean that the players are in control. There’s a reason that the adults are in the leadership position. … I think coaching is a two-way street. It has to be a communication between the coach and the player, and when that line of communication is there it allows the relationship to be built. It builds trust, it builds respect and ultimately it can lead to love. And when you have love, you can accomplish anything, motivate anybody to do just about anything.

“I love Chuba speaking out. I think he admitted that probably he might have been better served to go have a private conversation with Coach Gundy, in the future he probably will do that. But I will say in this case, it really resulted in nothing but positives for our players, our coaches, Coach Gundy, and I really think it sets up OSU football for … I think the best is yet to come. I think it’s been a net positive for everyone. I certainly have a lot of respect and admire the courage of Chuba being willing to speak out.”

As Oklahoma State president Burns Hargis pointed out on Thursday evening, a problem of disengagement or isolation from your squad is fixable. A problem of racism may not be. As an aside: If you still think this is about racism or that Gundy is a racist then you haven’t been paying attention. Nobody who has reported any of this (including myself) has unearthed anything resembling racism within the program. Mike Gundy is not a racist. Mike Gundy might be someone who became so inflated with his own image of himself that he forgot what it’s like to need anything from anyone around him, but he’s not a racist. This story is about power and distance, not Mike Gundy, evil authoritarian.

Anyway, if the first two things I noted are true — that Gundy is the best coach in school history and this problem is fixable (and both are true) — then it became equally true at some point over the last few weeks that the probable best path forward for Oklahoma State (especially given the $17 million buyout Gundy would have commanded!) was to keep Mike Gundy and make all of this work into the future.

But how? Holder addressed that as well.

“The missing link [for the players] has been a more personal relationship with their head coach,” said Holder. “They respect him as an excellent gameday coach, but they want more coaching on a personal level. This crosses all racial lines to a man. Our players want a better connection with Mike Gundy. They view him as a difference-maker and they want him to help them grow as leaders. We conveyed this message to Coach Gundy, and his reaction has been everything that you would want.

“He has been humble, remorseful and committed to change. As uncomfortable as the last few weeks have been, I believe this experience has changed Mike Gundy and our players will be the beneficiaries. At the end of the journey, the decision was obvious. Mike Gundy is an excellent coach and he’s accomplished a lot in his 15 years. However, the best is yet to come.”

Humble, remorseful and committed to change. This is what great leadership looks like. Not popping off without fear of repercussion or playing surgeon general in pressers in the middle of a pandemic.

Are there questions about how dedicated someone who has made over $40 million in his career will be about engaging in personal relationships within his program? For sure. Will there be issues in recruiting? Probably (although I think those are a bit overstated right now). Did Oklahoma State leverage the hell out of this situation to reduce Gundy’s contract by $1 million and drop his buyout 25 percent and his contract from 5 years to 4 years because they might not trust him to follow through on all of this? Absolutely!

However, a locked-in Mike Gundy who is tending to the machine he built (instead of observing it from afar) and constantly evaluating ways to improve upon it and tweak it and incrementally improve something that’s already pretty freaking good is a great (hopefully!) end result here.

So you might be frustrated at Chuba Hubbard for doing what he did. You also might be frustrated at us (and others in the media) for doing what we did. But the reality is this: Every single person you’re looking at as a fan — Mike Gundy, Mike Holder, Chuba Hubbard, other fans, local media — wants Oklahoma State football to thrive. Wants Oklahoma State football to thrive at a level at which it has never thrived at before. Everyone. Because it’s more fun to coach, athletic direct, play for, root for and cover a title-type team than anything else. Nothing is as much fun as that.

While nobody knew what the outcome in any of this would be, I think the goal was either to reintroduce Gundy to reality or to move on to somebody who would engage with it in a more meaningful way. I also think it’s crazy to think that the latter choice there is preferable. If it’s feasible, if you can reengage the best coach to ever do it in Stillwater to the way he used to function with his players and his organization, that’s the best version of this story for everyone involved. Maybe that’s impossible, but the optimistic part of me would like to think it can (and will) happen.

This is where I have sympathy for Gundy (not that he cares). The triumvirate of money, power and success is a double-edged weapon. It’s what we’re all striving for in whatever industry we work in and what culture tells us should be our greatest aim, the thing that will deliver the greatest joy. Other than that promise not being true, that triumvirate can also drive a wedge between you and those around you. Did this happen with Gundy in Stillwater? Based on people I’ve talked to, there were times and places where it did. However, who among us could say with any confidence at all that we would be immune? Who among us has had even 1 percent of the money, success and power Gundy has? It’s easy to sit here and poke at what went wrong or what could have gone better. It’s much more difficult to sit atop the throne and make sure the kingdom is humming. That’s not a free pass for any of this but rather an olive branch of empathy that we have no idea how difficult it is to do that job day in and day out.

“I don’t think it started out that way with Mike, or any coach,” said Holder. “But over time, things can change. The job gets bigger, responsibilities get bigger and with that, you have more people to manage, more players on your team and that can blur your priorities. It’s awakened him, or alerted him to the fact that he wasn’t as close to his players as he needed to be. He’s gonna change that.”

The mystifying part to me here is that Gundy legitimately has created a culture at OSU that seems (and I believe is) tremendous. I’ve written over and over about all of this and how Gundy has been at the forefront of so many different good changes within college football (and within OSU). Holder said much of the same in his call on Friday morning. The list is lengthy. So how does 95 percent of it go so well (better than most programs nationally) and 5 percent go so poorly? I don’t know what we will ever know the answer to that question. I wonder if Gundy himself even knows the answer.

It probably doesn’t matter either. Because what matters is that Oklahoma State is better when its top three leaders — Holder, Gundy and Hargis — are working hand in hand instead of everyone trying to reel Gundy in away from the ledge. This should not be breaking news — that an organization with a lone wolf leader is not as strong as an organization with united leadership at the very top. Hopefully this summer awakened Gundy to that reality because — no matter what anyone says or thinks about what the future could look like — Oklahoma State football with a thriving, healthy Mike Gundy leading the way is the very best version of Oklahoma State football. Now, for sure, and maybe for its entire existence.