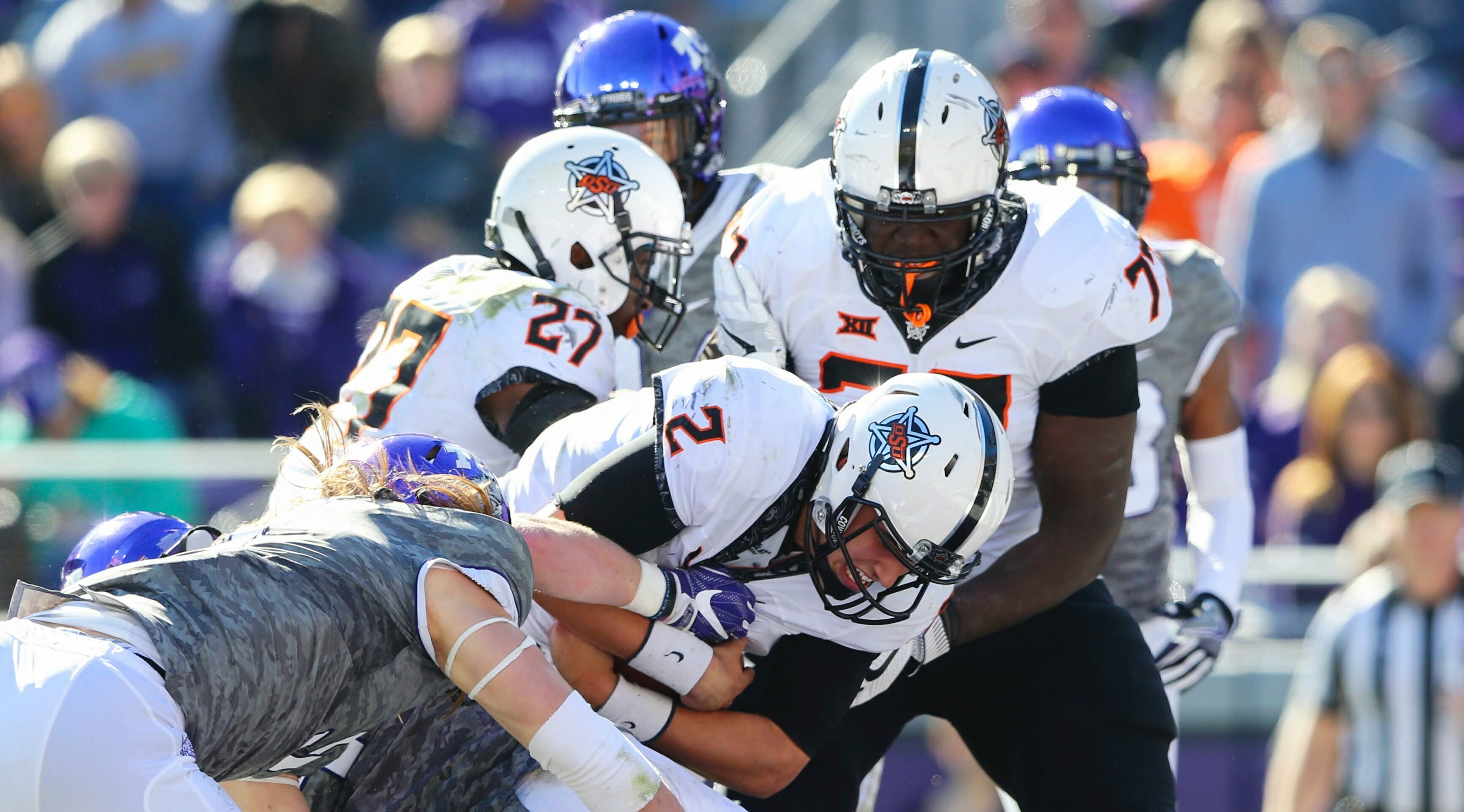 Another great advanced stats post from friend of the blog @BradF79

This week doesn’t need much of an intro, it’s Bedlam. Except last year where OSU got walloped at home 58-23, this has been a competitive series since 2010.  2011 has been the only victory, a blow out, and the close games this OSU team normally wins, seem to escape them against OU.

But even that trend shifted two years ago in 2014 when OSU went to Norman with a true freshman QB and came out with a victory in overtime after some last minute heroics by Tyreek Hill. I’m expecting an absolutely crazy game with perhaps the last team with the ball getting the victory.

This is a great matchup for both offenses against defenses that have really struggled throughout the majority of the year. The key matchup here to me is the turnover margin. OSU is +9 on the year while OU is flat at 0. Mayfield has thrown 8 INTs and fumbled 6 times (losing 3 of them).  Mixon has also fumbled 3 times, losing 2 of those. OSU has been opportunistic and that will need to continue this game.

Both of these offenses average nearly the same explosiveness but the OU offense is off the charts when it comes to efficiency and finishing drives. OSU will need to continue their improvement here; they were able to hold TCU to a 38 percent success rate their last game. The OSU defense has a clear advantage against the run, which will hopefully allow them to keep both Perine and Mixon in check and allow bracket coverage on Westbrook. The switch to a 3-3-5 seems to have improved the run defense, but it only improves it if they players can make one on one tackles. They’ve succeeded so far vs TTU and TCU, but OU presents an entirely different challenge.

Ultimately, whichever defense finds a way to have success vs the other’s’ offense is probably going to win the game. Whether that’s getting stops on 4th down, turnovers, or getting off the field on 3rd down. Looking for positives, you can see that OSU gets a turnover on 13 percent of all opponent drives and boasts a nearly 65 percent success rate on a reset possession (which would be a possession after the offense fails, either by punting or turning the ball over). OU doesn’t have these advantages, and their offense turns the ball over more the OSU does. Still that 3.46 point per drive value for OU is very hard to ignore.

OU and OSU haven’t played the exact same schedule, OU had to play both Houston and Ohio State, while OSU played Pitt and CMU. We’ll ignore the two cupcakes they played. Pitt has turned out to be quite a quality opponent but the loss to CMU looms large, especially if OSU finds a way to win in Norman.  Let’s look at the opponent adjusted numbers…

Well, now the numbers have shifted heavier in OUs favor. Not only are all their offensive numbers off the charts, their defensive numbers (outside of passing down defense) become above average except for 3rd down (which is most of the time a passing down) and in the 4th quarter.  The outlook looking at these numbers is not good and helps explain the opening 14 point line for OU.

If OSU can find a way to keep the game close going into the 4th quarter, their chances of winning greatly improve. That means they must weather the storm early and try to keep up, otherwise, it might be a long afternoon. Defensively, OSU’s havoc rate has fallen throughout the year, 16.4 percent is still good however, and the 7 percent from the DL is outstanding. OU’s havoc comes from their linebackers, namely Jordan Evans who could be limited or out with a hamstring injury suffered vs WVU. Their other threat Okoronkwo leads their team in sacks.

OSU is one of the best in the country at punting and kickoffs.  OU is good as well, but struggle in PR, while OSU struggles in KR. One thing to watch here is the OU KR game. OSU must be sound in coverage or make sure the ball is kicked deep into the endzone.

OSU has the better kicker and if the game comes down to it, you have to trust Grogan to win you the game for you as he did in 2014.

This is the best offense OSU has faced…  TTU was a close second and after three 3 and outs to start the game, TTU lit up OSU on drive after drive. They never really made an explosive play but they methodically marched up and down the field.

Keys to the game: