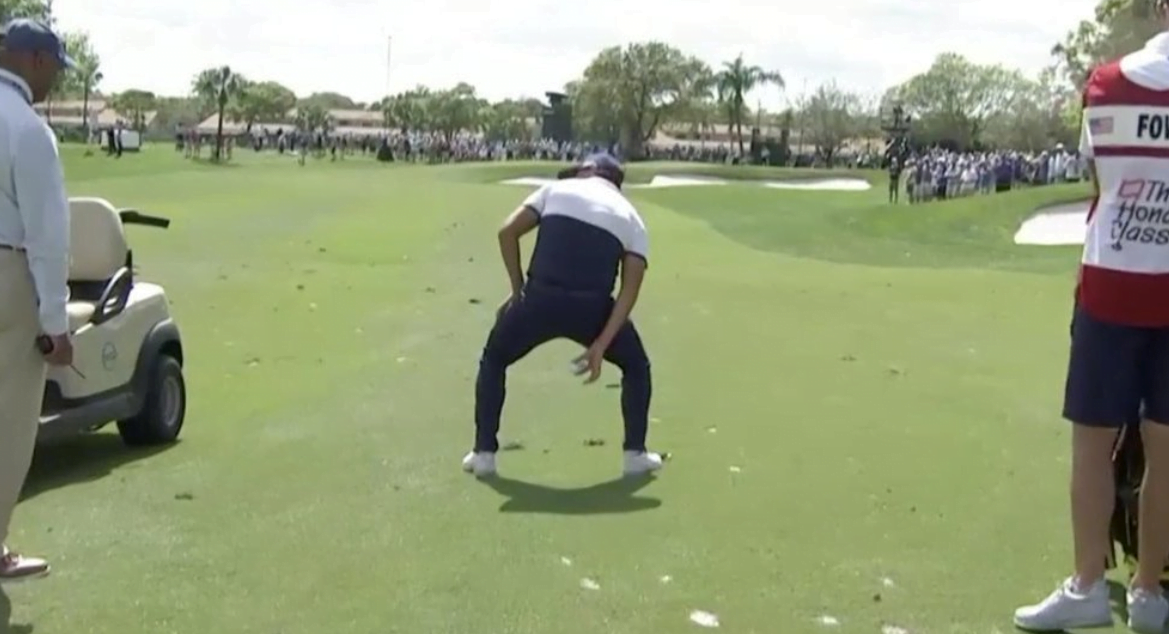 At the WGC-Mexico Championship two weeks ago Rickie Fowler was penalized for dropping a ball from shoulder height after hitting his shot out of bounds. The problem with that is that the USGA has implemented new rules in 2019 that preclude you from dropping from shoulder height. Instead you must drop from knee height. Fowler was given a penalty stroke, which is both apropos according to the rule and also absurd.

At last week’s Honda Classic, Fowler had another opportunity to drop, and this time he took the pleasure of acting like he was pooping out the ball as he held it underneath his body and squatted down. It was both hilarious and not something I expected to see from him. I’m also not sure it’s the greatest look in the world. Anyway, here’s how it went down.

“To me, we all want to grow the game,” Fowler told USA Today. “You’re not going to grow the game by making it look funny or making guys do unathletic things. You want to make it look cool. Ultimately we’re trying to bring more of a younger generation in, and when you have people making fun of something it doesn’t do the game any justice.

“A lot of us have talked about it. Seeing guys drop (in January), a lot of us were laughing at it and making fun of how bad it looks.”

Fowler was both praised (for obvious reasons) by fans and criticized by media members, including maybe the current GOAT of golf writers, Michael Bamberger. Fowler’s is a smaller battle in a larger war between the stars of today’s game and the USGA, but here’s what Bamberger had to say.

Rickie Fowler’s Three Stooges mock-drop on Thursday – from between his legs without the aid of running water — he has to be better than that. It was beyond absurd. Awful. [Golf.com]

Anyway, once we got past all of that hubbub Fowler actually closed pretty hard coming home on Sunday with all kinds of players — including (Mrs. Pistols’ fave) Brooks Koepka, Vijay Singh and former Poke Wyndham Clark — in the mix.

He didn’t hit the ball particularly well — 65th in proximity to the hole on the day — but his putter made up for it as he holed birdies of 45 feet, 22 feet, 16 feet and 7 feet on the back nine to shoot 32 on that side and 8-under 272 for the week. He came up one shot shy of a playoff with a cat named Keith Mitchell in his bid for a second Honda in three years, but boy it was some kind of run to 18.

Fowler also provided probably the moment of the tournament came at No. 17 on Sunday. He needed to play the last two holes in 2-4 to have a prayer, and he did. The 2 was certainly more improbable than the 4 though.

“Yeah, it was nice to get some stuff to go,” said Fowler of his hot putter. “I felt like I hit a lot of good putts out there today. A few that didn’t go in.

“Obviously with a jam packed leaderboard you knew it was going to come down to the last hole with five or six guys or so up there. Two or three are going to find a way to kind of be out front. It’s hard to separate yourself here on such a tough golf course, especially in the conditions. You can’t really run away. It’s tough to do that. So it’s really easy to go backwards.”

Fowler, who — fair or not — has earned a bit of a reputation for not shutting down tournaments, was spectacular coming home. He shot 66-67 on the weekend and nearly won his second event in his last three starts in 2019. It was everything you wanted from him over the last few hours, other than the win. But based on how 2019 has started, it’s not the last big (hopefully drop-free) Sunday afternoon we’ll see from him this season.