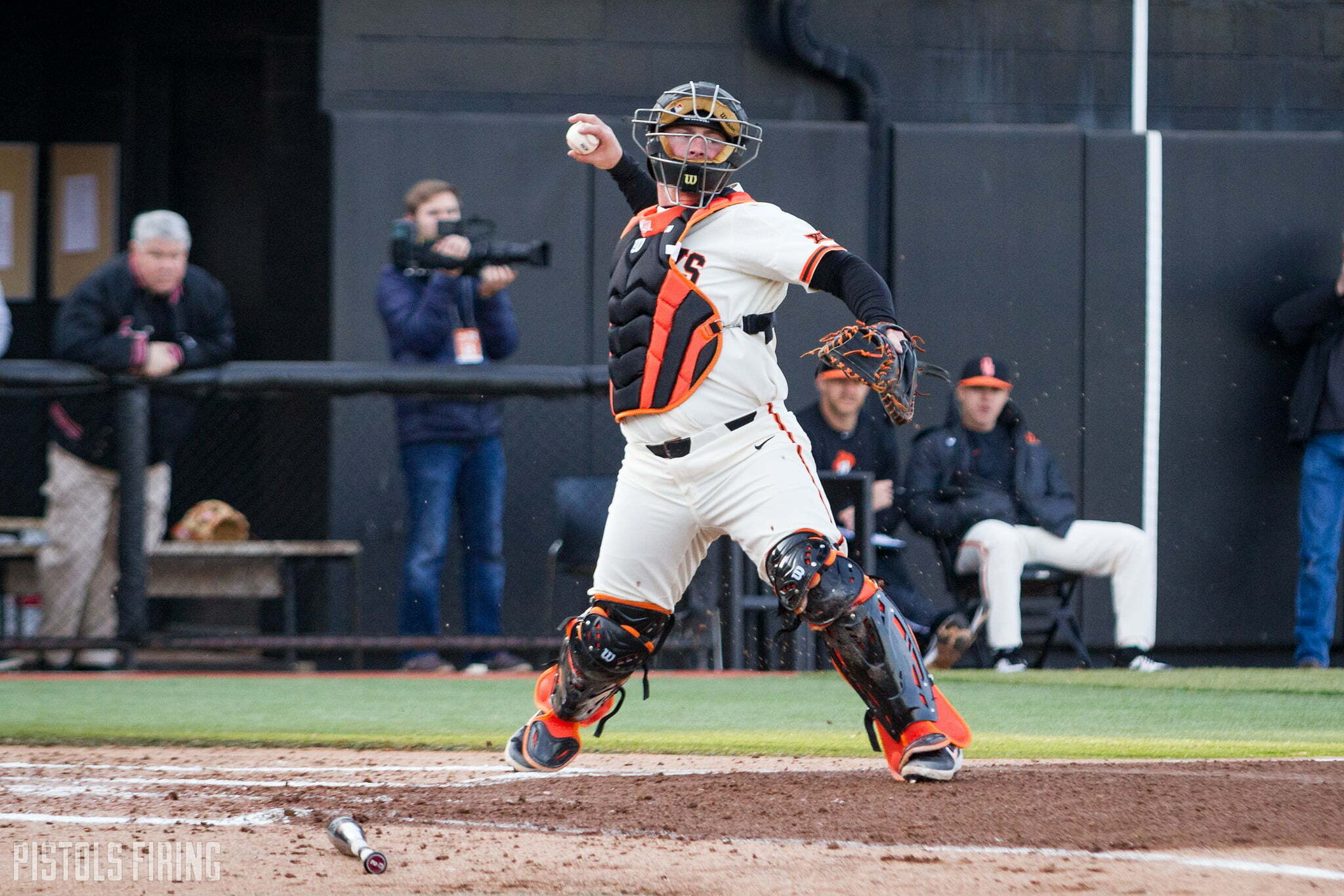 The Oklahoma State baseball team went 2-1 against Wright State this weekend. The Cowboys won the first game 4-0. They won the second 17-5 and lost the third 5-4.

The second game is obviously the one that jumps off the page. The 18th-ranked Pokes’ 17 runs is the most they’ve scored in a game since scoring 18 against Arizona State in 2017. The Cowboys hit five home runs Saturday, two came off Christian Funk’s bat. Funk had a game-high five RBIs. Alix Garcia and Carson McCusker weren’t too far behind with four apiece.

The Cowboys’ lone loss of the series entered the ninth inning tied at 4. Wright State scored it’s go-head run off a wild pitch when third baseman Seth Gray scored off Joe Lienhard’s mishap. The Cowboys got a runner to second with one out in the bottom of the inning, but couldn’t bring him home.

The 5-2 Cowboys are back in Allie P. Reynolds Stadium on Tuesday, as they host Oral Roberts with first pitch scheduled for 4:05 p.m.

The No. 20 OSU softball team spent the weekend at the Marry Nutter Collegiate Classic, going 3-2.

The Cowgirls played two ranked teams at the event, defeating No. 13 Arizona State 2-0 before falling to No. 14 Arizona 3-0. The Cowgirls also defeated North Carolina, a team receiving votes, 7-5, and they run-ruled San Diego State 15-5 in five innings. The Cowgirls lost to Colorado State 2-1 in their final game of the event.

At 10-5 on the season, the Cowgirls finally get to play at home this weekend. OSU hosts an invitational and will play Seattle, Syracuse, McNeese State and Northern Iowa.

The OSU men’s and women’s track and field squads competed at the Big 12 Indoor Championships this weekend, where the men’s team finished fourth, and the women finished fifth.

The Cowgirls had two individual champs. Sinclaire Johnson set a meet record in the 1,000 meters at 2:44.23, and Molly Sughroue won the women’s mile in 4:48.75. Ariane Ballner wasn’t far behind Sughroue, claiming second at 4:49.17.

Although the Cowboys didn’t have any Big 12 champions, Ashton Hicks set a school record in the men’s 400, finishing in 45.60. That time was good enough for second place.

Up next for OSU track is the NCAA Indoor Championships March 8 and 9 in Birmingham, Alabama.

Speaking of Alabama, the No. 13 OSU women’s tennis team defeated Wake Forest in the championship of the Blue Gray Classic in Montgomery.

The Cowgirls topped Wake Forest 4-0 after beating Texas Tech 4-0 in the semi finals. The Cowgirls will be out of action until March 8 when they host Gonzaga.

The Cowgirls broke a four-game losing streak Saturday against Kansas.

OSU smoked the Jayhawks 72-52 off 42 points from the dominating duo of Vivian Gray and Braxtin Miller. The pair also combined for 17 rebounds and five assists.

The Cowgirls sit seventh in the Big 12 standings with three regular season games left, starting against OU in Norman on Monday night.

OSU won fences, flat, horsemanship and reining 3-2. The Cowgirls are 4-5 this season, as they head to Delaware to match up with Delaware State and South Dakota State this weekend.