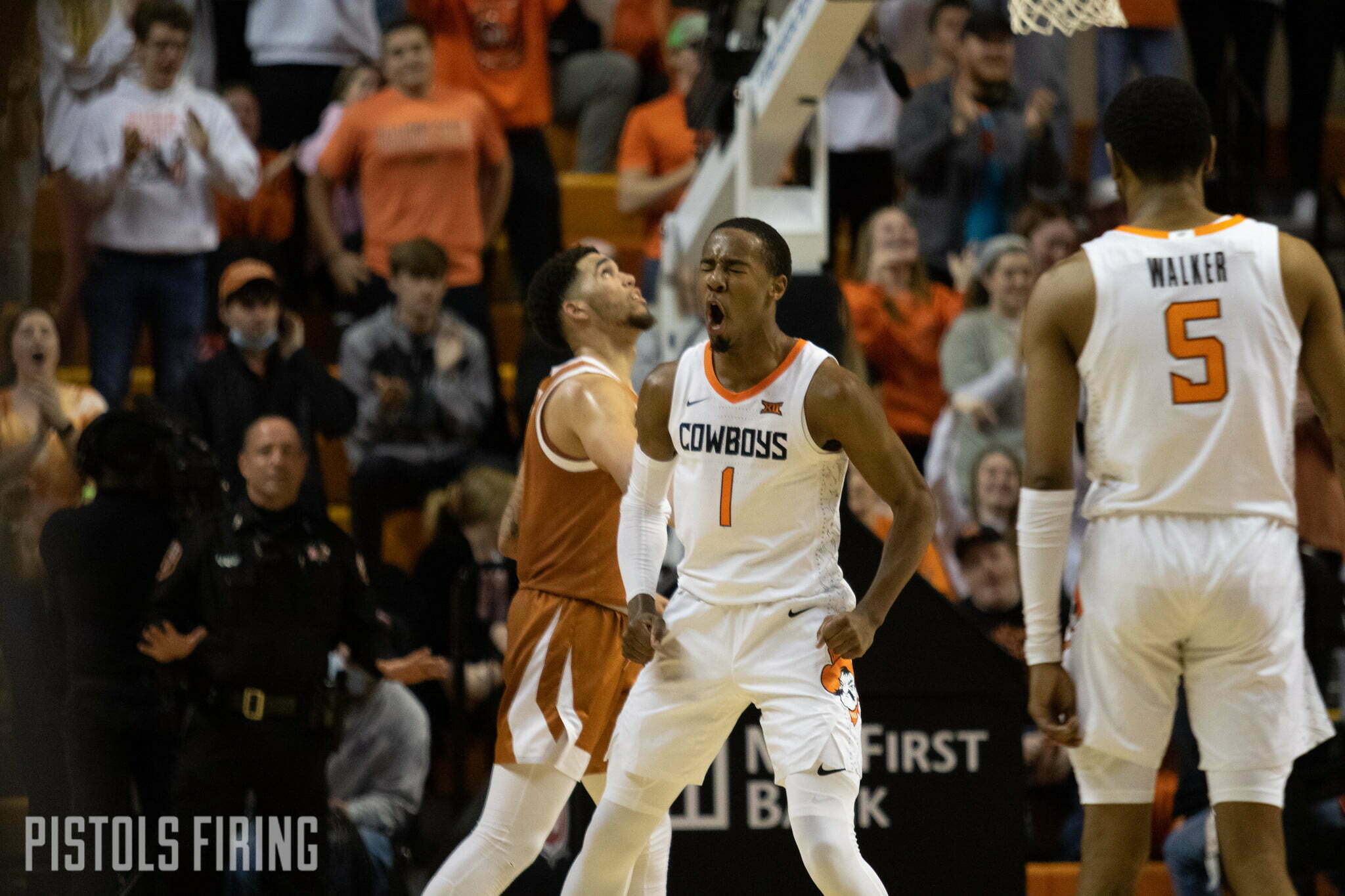 STILLWATER — Since the Golden State Warriors won an NBA championship in 2015, people have started looking at basketball differently.

The Warriors, led by Steph Curry and Klay Thompson, put up 2,217 3-point attempts during that championship-winning season. Golden State scored 2,649 points from 3-point range that year. It was one of the more glaring examples of a shift in basketball toward analytics. Statically, it makes more sense to shoot either at the rim or behind the 3-point line.

With under five minutes to play in Waco this past weekend, Thompson caught a ball on the wing. He probably had enough space to get up a 3-point shot with LJ Cryer closing out on him. Instead, Thompson gave Cryer a jab step before taking a step inside the 3-point line and pulling up for a smooth jumper. He hit it, putting the Cowboys up 53-45.

“I’ve seen a lot of the analytics on that, especially in the NBA,” Thompson said. “They do a lot of that kind of stuff, but I’ve always seen people being able to thrive in that area, like Devin Booker, who is one of my favorite players, CJ McCollum, CP3, just to name a few, have really excelled. I mean, it’s just an extra part of your game. Why not be a three-level where you can score in the paint, mid-range and 3. I just think it’s good I’m able to get to it.”

Thompson has scored 33 total points in his past two games. Here is a breakdown of how those have been scored:

Aside from some paint floaters and breakaway dunks, Thompson scored a good chunk of his recent points in off mid-range jump shots.

Speaking analytically, Thompson is 6-for-14 on 2-point jump shots during the past two games (some of those jumpers occurred in the paint, but dunks or layups aren’t included). Meanwhile he is 2-for-8 from 3-point range. That means he is averaging 0.86 points per 2-point jump shot and 0.75 points per 3-point jump shot. It’s a small sample size, but Thompson has been more efficient on those shots inside the 3-point line.

“I like for guys to shoot shots where they can make them,” OSU coach Mike Boynton said. “I understand the logic and the analytics. Also I played the game, not that that means everything, but you got to have a little bit of feel with this also. So, I’d like him to shoot more 3s, but I also want him shooting shots he’s comfortable shooting and feels confident that he can make consistently.”