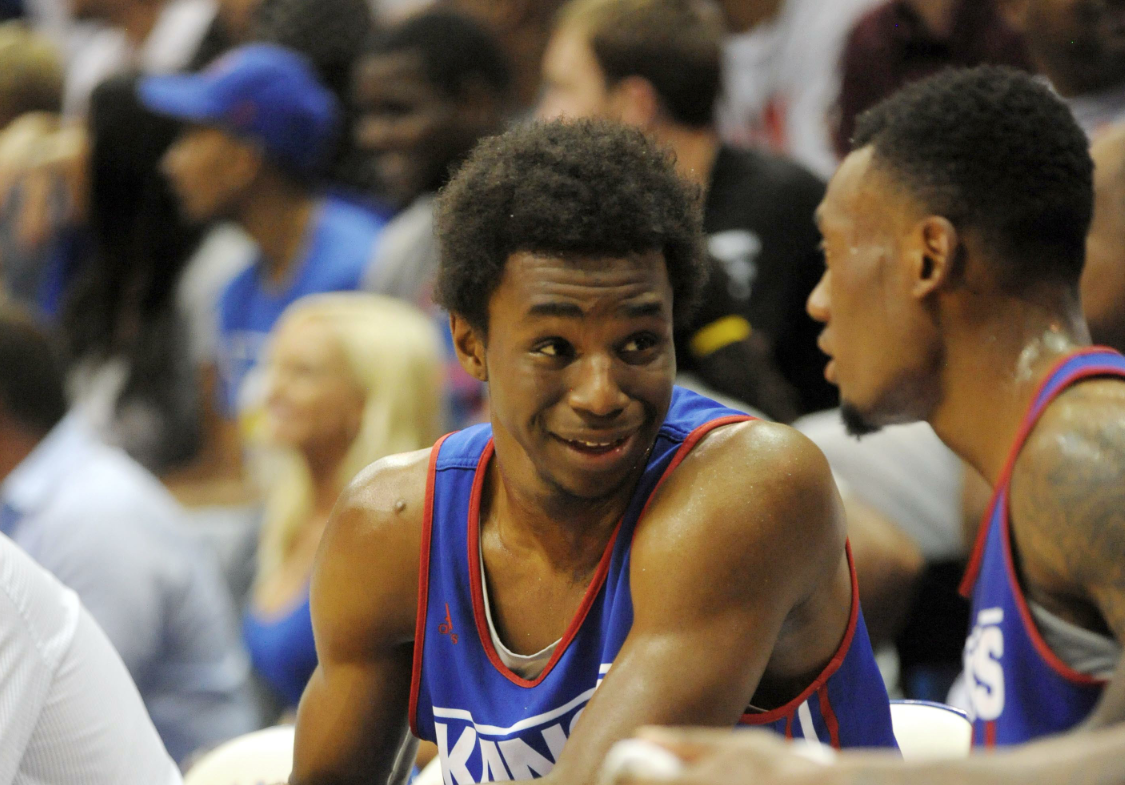 I tweeted out Travis Ford’s tongue-in-cheek “Wiggins is, from what I understand, the best player to ever play” comment early this morning and Jayhawk fans came out of the woodwork to remind me which of our two teams is the nine-time defending champs of the Big 12.

Somehow the argument got turned into Smart vs. Wiggins vs. Cory Jefferson (??) which is insane but let’s turn back to Smart and Wiggins for now.

Kansas fans (any fans) saying Andrew Wiggins is definitely a better basketball player than Marcus Smart are out of their minds. He might be — in fact I’d put the odds better than 50/50 that he is — but you can’t show me a high school, any high schooler in the history of basketball and say “this guy will be definitely be better than the reigning Big 12 player of the year.”

He could be a lot of things.

This isn’t me being a homer or being in love with Smart or anything like that,[1. I’m actually doing a piece on Wednesday about how Markel Brown has a chance to be as good or better than Smart.] it’s just logic.

That would have been like me last year in the preseason saying “Marcus Smart is definitely better than Pierre Jackson.” It turned out to be true but nobody knew exactly what they were getting out of Smart last year and if they tell you they did, they’re lying.

It would also be like if Smart had gone to the League last year and me writing hyperbole about how he’s definitely the best first or second year guy in the NBA.

No, that’s total silliness. It would be silliness after five games, after 10 games, and after 15 games. I know we don’t love doing this but let’s let the thing play out a little bit. Just one half, five minutes, something.

I don’t ask for much.

You know what’s great though? We get 18 league games from each dude to see who the best player in the league (and possibly country) is. We don’t have to Marcus Mariota-Johnny Manziel transitive property this thing.

We get Smart’s return to Allen Fieldhouse where he’ll absolutely good booed out of the gym[1. If he does a back flip in pregame warmups, somebody’s going to have to seize control of this blog.] and we get Wiggins’ baptism into Gallagher-Iba which I’m guessing there’s no Canadian equivalent to Gallagher-Iba.

Big 12 hoops might be my favorite league in all of sports and this year, like most year, should be pretty classic. Even better, if Twitter today was any indication KU fans are a little bit worried about that nine-time crown being swiped by Smart and Co. Zero starters returning, a team that barely hung on for the title last year as it was, and Smart’s magic will do that.

I love the bit of bad blood that was shared today though. This league needs more of that. With Mizzou gone this the Big 12 needs a new elite basketball rivalry.

Oh and no worries if hoops doesn’t work out, KU fans, Charlie Weis has things under con….

I think the way you measure “Most valuable player in the Big 12” should be “Would my coach trade this guy for that guy straight up?”

I don’t think Ford trades Marcus for anyone, especially not sophomore year “I’ve been playing NBA PGs all summer” Marcus.

Would Self trade Wiggins for Smart straight up? I don’t know if he would (since he’s one of the only people who has actually seen Wiggins play), but I bet he would think about it.[1. He would definitely think about it. In fact, I’m pretty sure he would do it — especially sophomore year Marcus for freshman year Wiggins.]

And would anyone trade either of those guys for Cory Jefferson? Hell no.