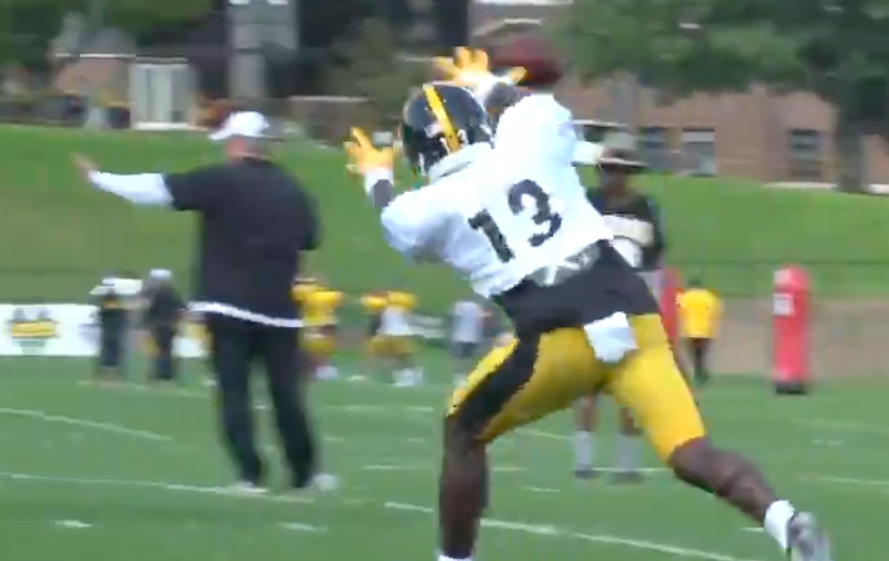 Seven-time Pro-Bowler Antonio Brown made the bold and somewhat unprecedented move earlier this spring of throwing such a fit that he left Pittsburgh with no choice but to deal him elsewhere. In March, he was traded to the Oakland Raiders where he subsequently signed a $50-million dollar deal, leaving the Steelers searching for production at receiver.

Fortunately for them — and for former OSU receiver James Washington — an investment was made in 2018 when the team drafted him in the second round and bet on his Biletnikoff-winning talent to become a star. Now with Brown out, Washington is the trendy pick by many to emerge as a breakout candidate behind JuJu Smith-Schuster in Pittsburgh’s receiving corps.

Plenty of folks have buzzed about Washington’s talents and deep threat abilities, but the problem, it seems, is beating out the competition in camp. Yes, Antonio Brown is gone, but even beating out Donte Moncrief and Diontae Johnson has seemingly been a tall task for the second-year pass-catcher.

One of the most important aspects of this training camp for the Steelers is to determine who will replace Brown in the starting lineup. It’s early, but there is a leader in the clubhouse through the first week.

The battle for the starting job opposite JuJu Smith-Schuster is ongoing, but Donte Moncrief is making a strong impression on his teammates. [Post-Gazette]

Moncrief signed a two-year, $9 million deal in March, and Johnson was drafted in the third round of the 2019 NFL Draft. Meanwhile, Ryan Switzer and Eli Rogers remain lurkers in the WR room.

Pittsburgh’s first depth chart released Tuesday shows promise; Washington is WR2 behind Smith-Schuster and ahead of Johnson. Moncrief is WR1 opposite Smith-Schuster. Still, it seems his stock is slipping a bit in camp despite shedding weight ahead of 2019.

Washington is having nowhere near the camp he had last year, but that’s to be expected. Washington’s rookie preseason was one of the best I have ever seen. We all know that didn’t translate into September and beyond. His camp has been ho-hum to me so far. He’s made his share of plays but not as much as you would probably like to see. It has been noticeable that he’s stronger and faster than his rookie season. [The Athletic]

With Big Ben and the Steelers desperate for someone — anyone! — to step up and fill Brown’s gaping void of production, Washington’s starturn could be around the corner. The opportunity is there, now, the execution …

“You know, I’m just taking it day by day,” he said recently. “Trying to get better than I was yesterday. And that’s all I can really do at this point.”