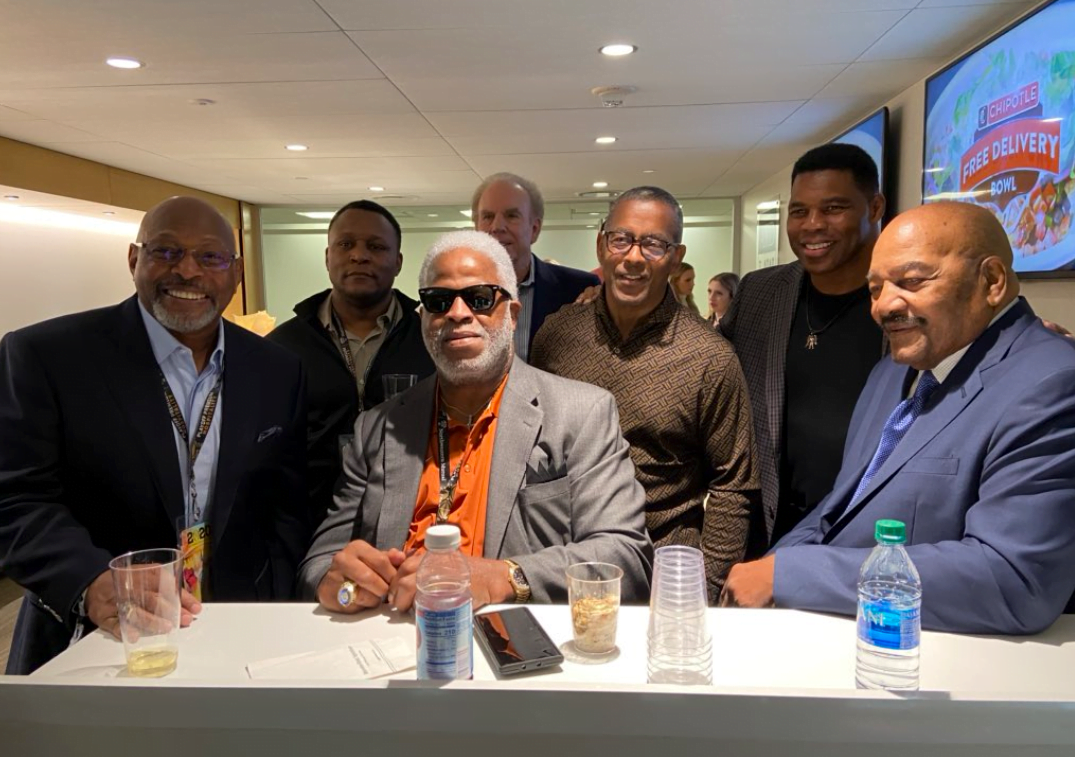 There was a lot (like a LOT!) going on yesterday, so this Barry Sanders news got a little bit buried. But if you — like me — didn’t know what was going on last night when the 11 best college football players of all time were honored during halftime of the title game, here’s what it was. ESPN came up with their top 150 list to honor the 150th anniversary of this stupid sport, and the top 11 were revealed on Monday (Baker Mayfield, by the way, was No. 150). Here’s an explanation of how this went down.

The game is made up of more than running backs, but the ability to burst through the line, to plant a foot in one direction and take off in another, has beguiled us from the earliest days of the sport. The blue-ribbon panel of 150 media members, college administrators, and former coaches and players who accepted the responsibility of selecting the best players in the history of the game are suckers for the ball handlers. Nine of the top 10 and 19 of the top 25 are running backs. [ESPN]

And more on who was voted for.

Approximately two-thirds of the 150 greatest players took the field from the 1960s through the 1990s. It could be that the voters succumbed to nostalgia, hearkening to their youth to find their true heroes. It might have more to do with how televising the sport came into its own in the 1960s and blossomed in the mid-1980s, after the U.S. Supreme Court lifted the restrictions placed on television appearances by the NCAA. [ESPN]

Here’s the ESPN recap of Barry.

In one of the great recruiting coups of all time, an Oklahoma State assistant got the only highlight tape of the Wichita, Kansas, prep star — and kept it. Sanders stayed under the radar while in Stillwater, in part because the Cowboys also had a back named Thurman Thomas. Sanders, as a sophomore, backed up Thomas and led the nation in kickoff returns (31.6-yard average), in part by returning the first kickoff of the season for a touchdown.

Sanders began as a junior by returning that season’s opening kickoff for a touchdown too. Sanders never slowed down. His four 300-yard games in a season? It created a record more than broke one; no one had ever done it more than once in a season. He rushed for an FBS-record 2,628 yards and set 34 NCAA records in his Heisman-winning 1998 campaign. [ESPN]

I also enjoyed this little nugget on Thorpe.

With a young coach named Pop Warner, whose single- and double-wing formations made the elusive Thorpe even more difficult to stop, Thorpe propelled the Indians to national prominence. He rushed for 173 yards in an 18-15 upset of Harvard in 1911. The Crimson didn’t lose another game until 1915. [ESPN]

How good would Jim Thorpe be with Gus Malzahn running single wing with him?!

Lastly, we can quibble with the No. 9 ranking, but the reality is that Barry only had one great year. Granted, it was the greatest year anyone in the history of the sport has ever had, but him at No. 9 isn’t the travesty it would seem like from the outset.

When I was a kid I dreamed of meeting a college football player. To be ranked as one of the top 10 players in history is an honor I will never forget. @CowboyFB @okstate @OKStateAlumni @NCAA @HeismanTrophy #WishDadCouldHaveSeenThis pic.twitter.com/ONTbgXw3ud