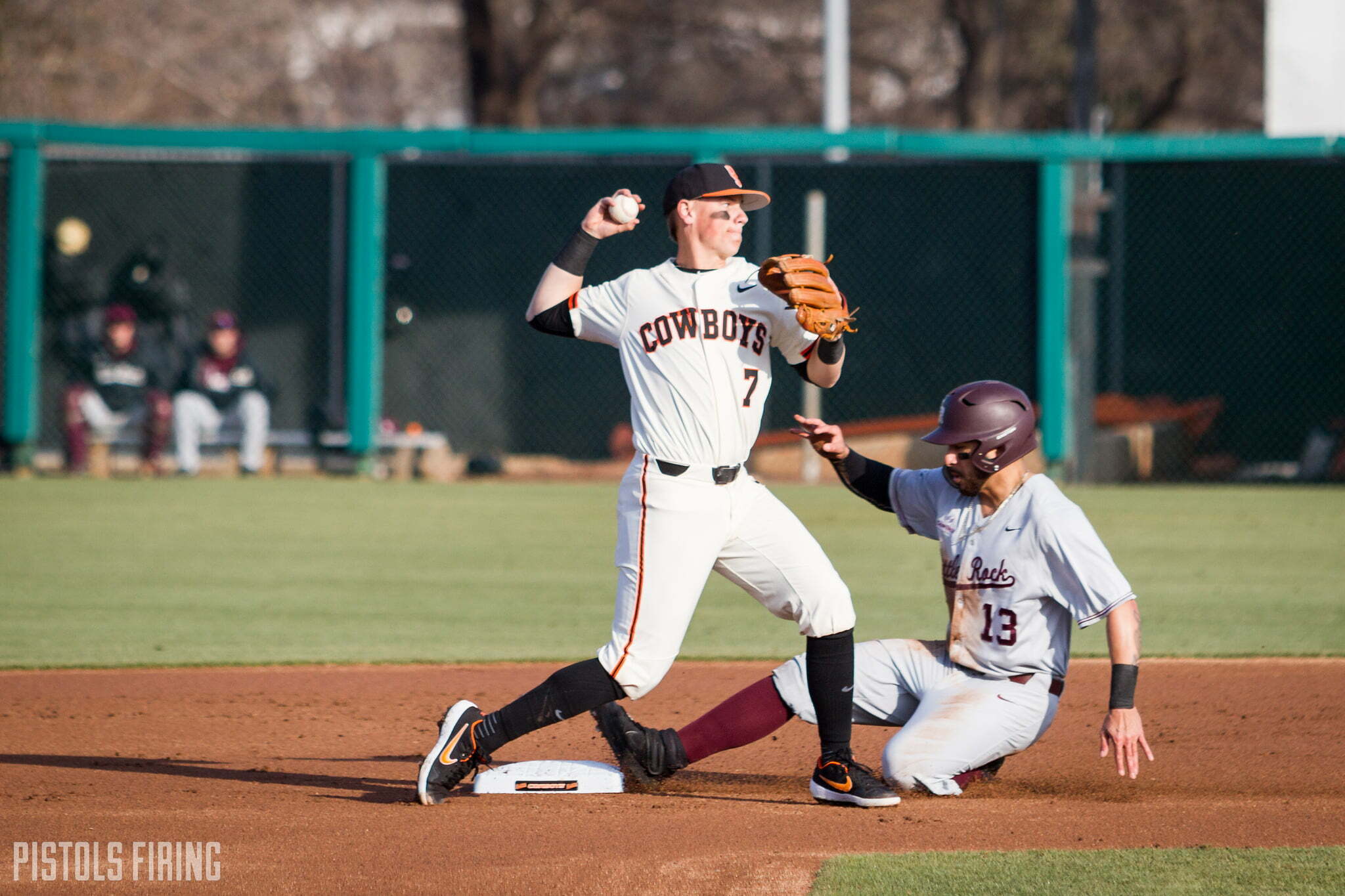 STILLWATER — Members of the Oklahoma State baseball team met with the media Monday to talk the Cowboys games against Wichita State, USC, UCLA and Michigan this week.

If you’d like to watch Josh Holliday’s full interview, you can do so here.

When Max Hewitt strolled out to his shortstop position, the baseball gods left him some gifts.

The weather wasn’t ideal to play baseball in this weekend in Stillwater, with temperatures averaging 33 degrees. For one game, Hewitt forgot handwarmers, yet he found some between second and third base. He said Iowa shortstop Tanner Wetrich had a pouch wrapped around his waist, which, Hewitt guessed, Wetrich kept stuffed with the little bags of warmth. On a few occasions some fell out, leaving presents for Hewitt.

“I kept picking them up and putting them in my pocket,” Hewitt said. “I just wanna thank him for the handwarmers this weekend. That was a good gesture.”

Stillwater’s winter weathers has provided difficulties in this early portion of the Cowboys’ season, but the Pokes are just a few days away from a destination known for it’s great weather, Los Angeles. OSU will participate in the Dodgertown Classic this weekend with games at USC, at UCLA then against Michigan in Dodger Stadium.

“Hopefully the weather there starts to cooperate a little more, but as long as its warmer than what it’s been like here, it’ll be a good time,” outfielder Cade Cabbiness said.

Allie P. Reynolds Stadium might be 38 years old, but it still able to boast some modern tech.

Before last season, former Cowboy and current Los Angeles Angels pitcher Andrew Heaney donated an advanced pitch tracker to help give the Cowboys a modern look on how to improve pitching.

“It’s more stuff than we need to know, but it’s pretty cool,” Elliott said. “(OSU pitching coach) Rob (Walton) gets all the numbers and sees what we need to improve on, and that’s what we specifically focus on in bullpens. If my release height on my slider is significantly lower than the release height on my fastball, I just try to bring that up and get it as close as we can to each other so that it looks more difficult to see as a hitter.”

Although this is the second year the Cowboys have had it, Elliott said they have started using the tracker more this season.

“Andrew’s been a great friend to OSU baseball,” OSU coach Josh Holliday said. “He’s a loyal ex-player, who loved his time here. He’s been really open about that, how much being here meant to him and how much he loves Cowboy baseball. He’s just been a very giving soul when it comes to, ‘Hey, what can I do to help this program? Or what are the things I can do to help the players inside the program?’

“His gift a couple years ago to provide some updated technologies allowed us to teach our players about the game in the modern technology era, to use that as coaches to instruct and also to make sure our players are getting exposed to professional baseball in modern ways that help people evaluate them.”

A fourth of his hits have been doubles, and on his 16 times getting on base this season, he has scored eight times and stolen a team-high four bases.

“I don’t think he’s overthinking it much. I think he’s, as you say, see ball hit ball. I think he’s in a nice place when it comes to that. He’s seeing the ball and hitting it hard. From there, probably don’t want to complicate it a whole lot more, right. Over time, people may start pitching him differently once they see him. Right now he’s doing a great job of keeping it simple, and he’s consistent.”