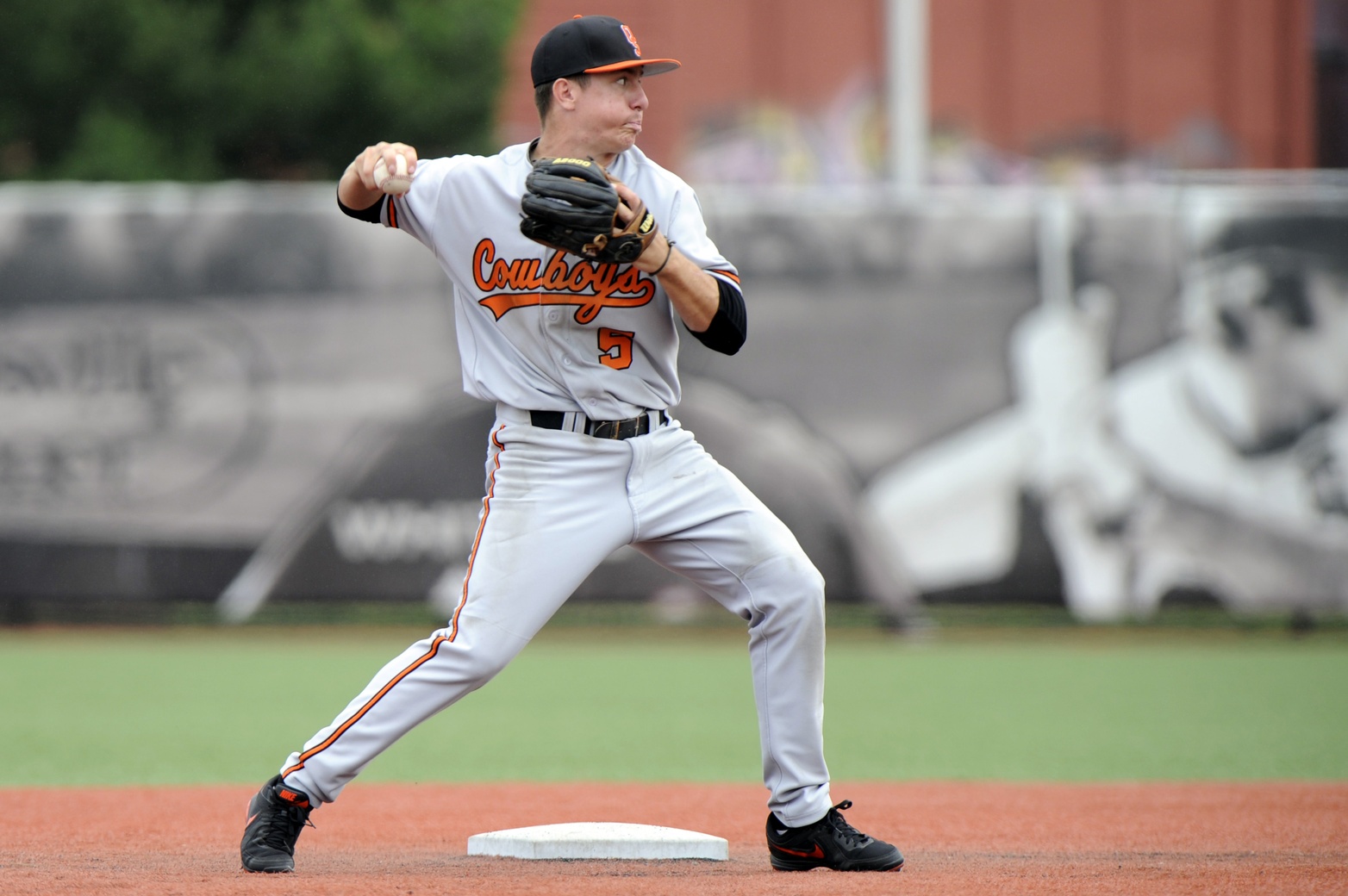 OSU Baseball had a very successful season last year in Josh Holliday’s first year as coach (click here if you missed the recap earlier this week). Over the next two days, we are going to look ahead to the 2014 season: today’s story analyzes the roster, and tomorrow we’ll look at the preseason rankings and schedule, leading up to first pitch against Incarnate Word at 11 AM.

Let’s see who will be leading OSU back to Omaha this season:

The loss of Randy McCurry, Robbie Rea and Victor Romero will be significant. Together, those three combined for the following:

The Cowboys play a lot of small ball, and play it well. OSU returns its two best base stealers, outfielders Gage Green (13 steals in 17 attempts) and Aaron Cornell (a perfect 12-12). Sophomore Donnie Walton, son of pitching coach Rob, slides over from second to shortstop, and will look to improve on his school-record 18 sacrifice hits last season. The Cowboys also have Saulyer Saxon (.301, eight doubles, six steals), along with more-than-adequate backups Corey Hassel and Craig McConaughy.

While losing McCurry, Rea, and Romero takes a good chunk of power away, there are still some sluggers returning. Right fielder Zach Fish,[1. Baseball America named him the eighth best Big 12 prospect for the 2014 draft.] who led the team in homers (seven) and slugging percentage (.451) last season, is back; so is first baseman Tanner Krietemeier, who led the team in batting average, runs and RBIs. Both have worked on their plate discipline in the offseason, so expect those numbers to climb.

Despite losing Jason Hursh to the draft, the Cowboys return a strong crop of pitchers. Back are relievers Vince Wheeland and Brendan McCurry,[2. McCurry was one of 50 named to NCBWA Stopper of the Year Watch List.] who combined for 14 wins and 10 saves.

Also back are starters Tyler Nurdin[3. Baseball America has him as the ninth best prospect for the 2014 draft.] (5-3, 1.89 ERA, two complete games) and Mark Robinette (6-1, 3.58 ERA).Alex Hackerott and Jon Perrin had successful seasons as well, and will be in the mix for innings this season.

In all, OSU returns 64 percent of innings pitched and strikeouts from last year, along with 73 percent of its wins. Pitching should be a very strong area for the Cowboys.

The Cowboys lost six players to graduation, and another four are not with the program anymore. But credit assistant coaches Marty Lees and Rob Walton for bringing in the fourth-best recruiting class in the nation according to Baseball America, who uses phrases like “a banner class” and “a major force [in recruiting].”

In all, 13 new freshmen and five junior college players have joined the program. Some will make an immediate impact, such as junior second baseman Tim Arakawa from Hawaii. He hit .377 and stole 25 bases last season, which plays right into Holliday’s system.

The battle for catcher has two new faces: junior Bryan Case is the favorite, although freshman Robie Rojas could see time as well (both Green and Fish have experience at catcher if needed).

There is also infielder Andrew Rosa, who has both power and speed and won a state championship with Owasso HS last year. He could emerge as the starting third baseman, but has the ability to play second or short as well.

The best part of the recruiting class might be the pitching, though. Even with just the returning players, OSU would have a strong pitching rotation and bullpen, capable of keeping up in the Big 12. But now they have arguably the best pitching staff in the league, and one of the better ones in the nation.

Freshman lefty Garrett Williams looks like he’ll grab a spot in the starting rotation, which would surprise no one. Baseball America tabbed him as Big 12 Freshman of the Year, mentioning his lower-90s fastball and strong curveball. Thomas Hatch and Tyler Buffett are two more freshmen who had stellar high school careers and could fight for a starting spot.

The bullpen for OSU might actually be too deep, which is always a good problem to have. Four freshmen will look to fight for innings, but the most impressive might be juco transfer Michael Freeman. Standing 6-foot-8, the dominant lefty reminds anyone watching of Randy Johnson. He averaged almost a strikeout per inning last season, and could be used as a situation reliever from the bullpen.

All of this means the Cowboys are looking at a roster full of talented players who should improve upon last year’s 41 wins.

Come back tomorrow, where we will look at the schedule and where OSU is ranked in the polls.