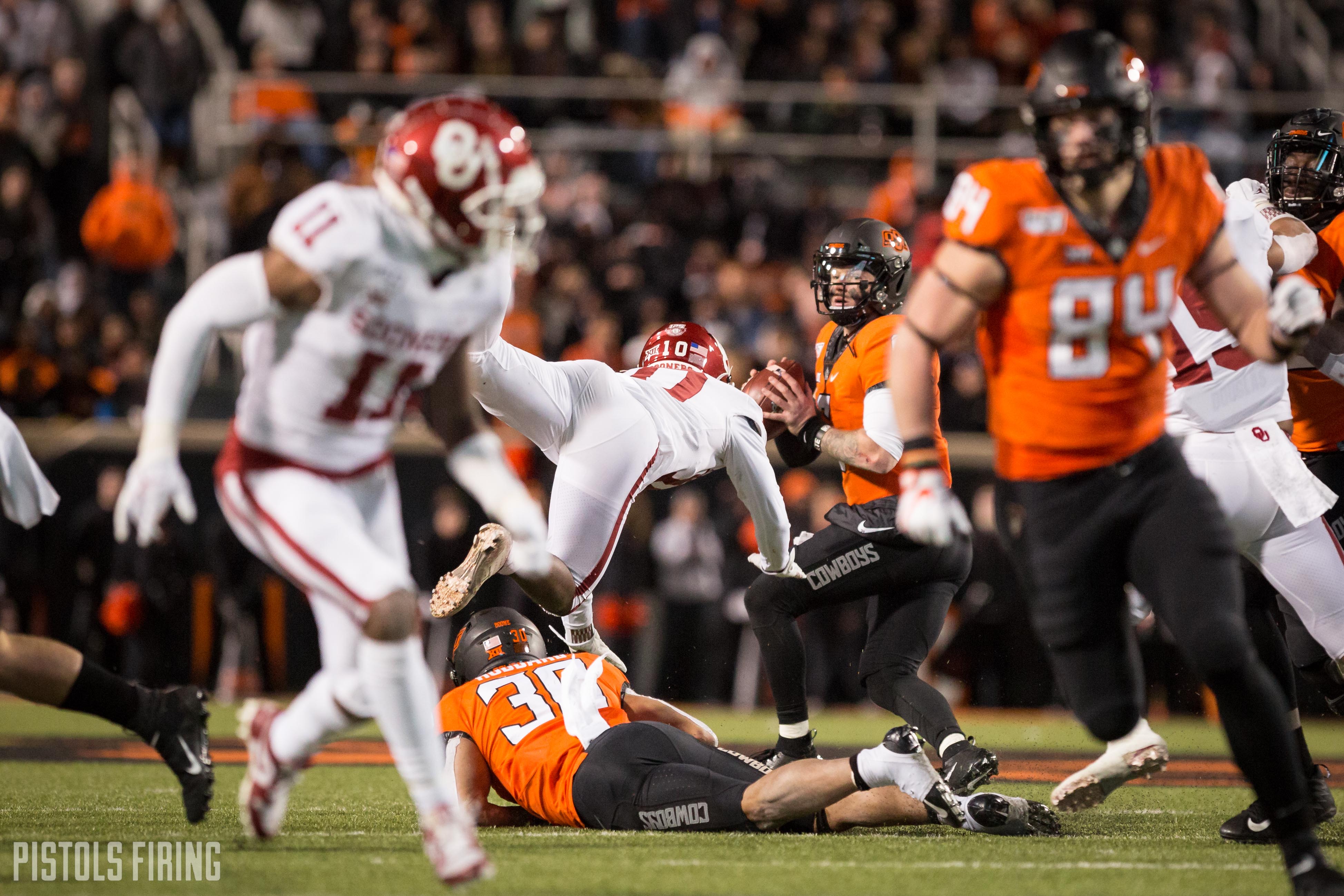 Oklahoma State lost a game it was a sizable underdog in to a rival that it, unfortunately, almost always loses to. It stinks and I can’t convince you otherwise.

I’m not much of a believer in moral victories, but the worst part of this one, what sucked the whipping wind right out of Boone Pickens Stadium, was the way the Cowboys finished: non-competitive.

Before we start looking forward to OSU’s bowl opponent, let’s debrief on another Bedlam loss.

The uniform matchup had me revisiting that historic 2011 Bedlam game in my mind, but I was quickly shaken to by Jalen Hurts planting a flag in the end zone on the fourth play of the game.

The Sooners and the Cowboys each started with a touchdown. Both offenses were able to move the ball relatively well in the first half, but the Cowboys settled for field goals the rest of the way out. Unfortunately, that is not a winning strategy when you’re facing a top 5 offensive from an efficiency standpoint.

Oklahoma State missed several opportunities, the type you can’t afford to miss in a rivalry game. The false start at the goal line which caused OSU to settle for 3 in the waning seconds of the first half. The fumble earlier on a drive that could have seen the Cowboys take their first lead.

Maybe OSU loses anyway, but when you’re going toe-to-toe with a heavyweight in primetime — when you’re trading punches with history — you have to land haymakers. OSU settled on jabs (and the points) and didn’t have its legs when it needed them in the later rounds.

Chuba Hubbard was not his normal electric self thanks probably in part to fatigue, as Mike Gundy said, but also due to the fact that the OU defense loaded up the box and dared OSU to beat it through the air sans its best quarterback and best wide receiver. That, it turns out, was a winning recipe.

Yes, he was OSU’s third-leading receiver, but when called upon he had some big-time catches that kept drives alive.

After a big game against Texas Tech, McCray kind of go lost in the shuffle of the receiver depth chart when Tylan went down and even more when Spencer followed.

But in his one year in Stillwater, he’s done exactly what the Cowboys asked of him. He was never targeted more than four times in a game but he caught 80 percent of those balls thrown his way. In a more well-rounded offense, he could have put up even bigger numbers.

The safety-turned-linebacker had his work cut out from him on Sunday with a stout Sooner rushing attack, but he came to work and left a little black and orange paint on the other guy.

MRod filled out the stat sheet like he has all year. OSU’s leading tackler led the Pokes again on Saturday night with 11 total drops (seven solo), 0.5 tackle for loss and 0.5 sack. Fortunately, Rodriguez will be around for another Bedlam, along with the majority of a defense that really came on down the stretch. That’s one bright point if you’re grasping for them on post-Bedlam Sunday.

This one is bittersweet because if the Cowboys could have sprung their workhorse loose on a few more of these, we could have seen a much more competitive finish.

Questions for Next Year

We don’t know who the Cowboys will face come bowl season so let’s look a little further down the road. This one stings and it will for a while. But given the loss of a Biletnikoff finalist and a dynamic QB who seemed to just be figuring things out, an 8-4 regular-season finish when you played your best football for most of November isn’t abominable.

The question is whether or not Oklahoma State returns its two best players. Tylan Wallace probably has enough tape to be relatively high on some NFL teams’ draft board. Chuba will have an even stronger case.

And his decisions for the postseason apparently haven’t yet been made.

#OKState running back Chuba Hubbard was asked about playing in the bowl game as a possible NFL career looms, and he said he was taking that decision “day by day,” so no guarantee OSU will have Hubbard for its bowl game.

But if by some chance the Cowboys do return their entire Big 3, 2020 could be a relaunch instead of a rebuild. If not, Gundy & Co. will have to replace two of its most prolific playmakers to ever come through the program in one offseason.