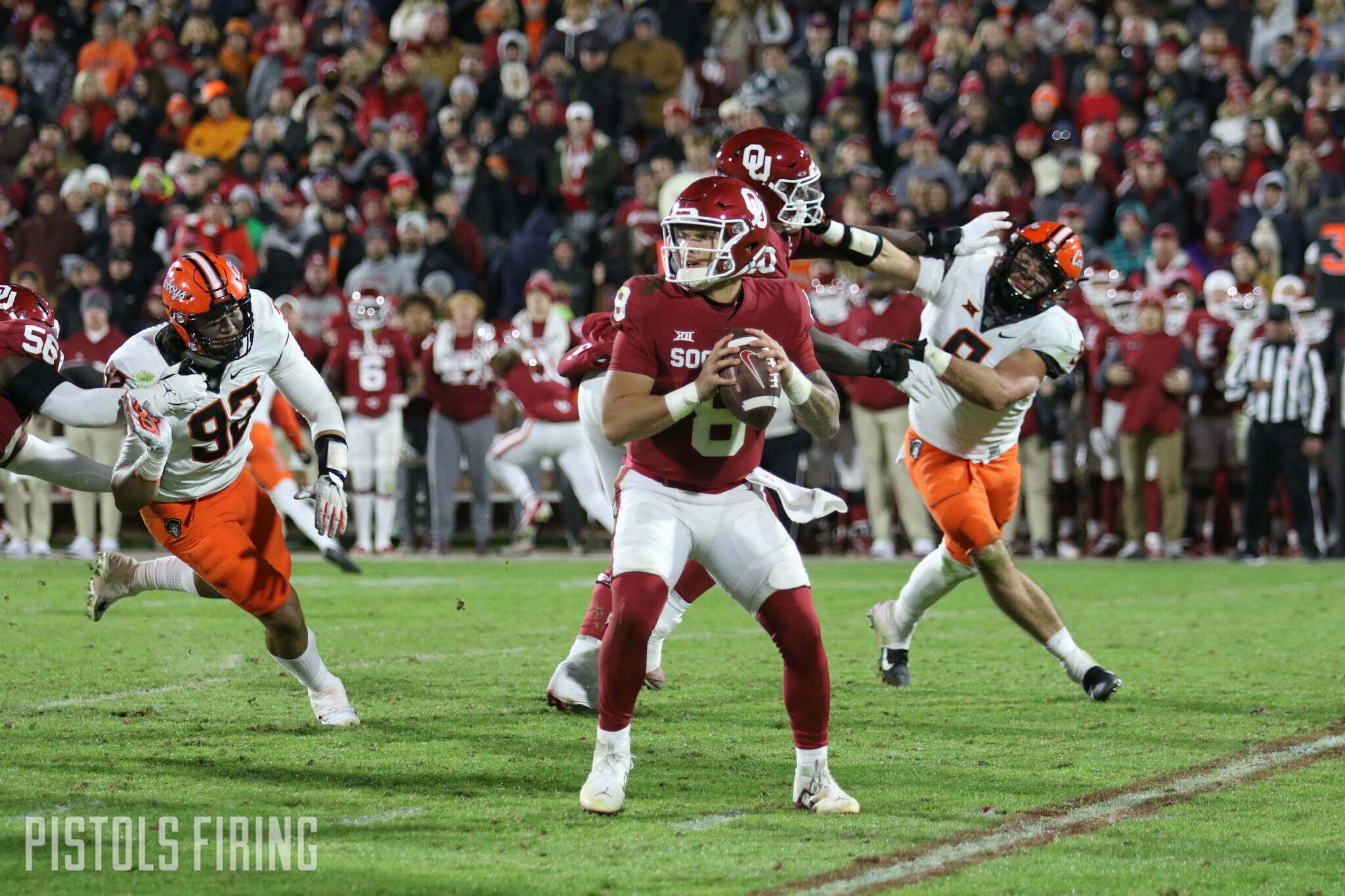 How do you even grade a pupil on such a performance that OSU had on Saturday night?

On one hand, OSU fought down to the very end. Heck, it won the final three quarters. OU scored zero points after the first quarter.

So yeah. That’s the pretext to this week’s Bedlam grades. Pain.

You could read this grade as an “F” for the letter grade or as an “EFF” as an expletive and you would be correct on both accounts. It was that bad.

You truly could not have drawn up a more perfect start for OU and a more dreadful start for OSU if you tried. I’ve never seen anything like it. It was top two on my list of least enjoyable stretches of sporting events I’ve attended in person (and it was not No. 2, I can assure you.) The euphoria from Sooners fans was dripping throughout the stadium. OSU could have hung in if it started slow and kept the game to a dog fight, but it could not, obviously, hang in when it was effectively spotting a home favorite a cool 28 points. Brutal.

I’ve regretfully logged on to Twitter dot com and seen the discourse. Unfortunately, as is the case with social media, the most inflammatory takes — Gundy gotta go! He can’t coach in big games! —have tickled the algorithm the most.

But there is nuance here that should be considered.

I’m just not sure that’s entirely on Gundy. Yes, ultimately it’s his responsibility for the product on the field. But when your receivers are dropping passes, your QB looks a smidge rusty and is clearly hobbled, and your offensive line is 2014-level bad, it’s just hard to pass too sweeping a judgment. That OSU even somewhat made it a game late says more about Gundy’s coaching ability and willingness and capability to change on the fly than does OSU’s falling behind 28-0 in the blink of an eye early.

I think you can criticize Gundy on a few things from this game — punting on fourth down late, even on a long down and distance, was effectively waving the white flag, for example, even if he was probably trying to play percentages — but a reminder here: OSU outscored OU in each of the final three quarters. If not for maybe the worst possible turn of events in the first quarter then I think we’re grading Gundy differently.

One would be dead wrong.

OSU didn’t even really try running the ball in this game (which, admittedly, may be because it was trailing by four scores before the game really even began). But essentially, OSU just decided it would live or die at the arm of Spencer Sanders, who attempted 67 (!!!!!) passes. In total there were only 35 rushing attempts; 17 of them were Sanders attempts, most of which were scrambles to run from pressure. Seven were Jaden Nixon runs, seven were Ollie Gordon runs, and a few were designed end-around plays. They averaged 2.9 yards per carry in total.

If you only looked at the box score, then you’d see Sanders’ four interceptions and one touchdown and might think the loss was on Sanders’ bum shoulder. But it was not. (At least not entirely.). One of those picks was on a miscommunication that (I think) was on a receiver. Another was a deflected pass that should’ve been caught by a receiver. One was in the red zone that absolutely killed OSU’s momentum. (Two might’ve been on Sanders. Fair.) But OSU’s receivers had the drops on Saturday much like most of the season. Bryson Green had one hit his hands a few times and couldn’t corral it. Same for Brennan Presley and Jaden Bray. The conditions might’ve played a factor and some of the catches would have been pretty spectacular, but the receiving corps I think shares some blame for some of the general struggles Sanders had. That unit just hasn’t quite performed in the way that past iterations have.

Can you imagine how many times Gunnar Gundy or Garret Rangel would have hit the turf?

This offensive line has been brutal down the stretch of the season. What once was considered a fairly deep unit has been ravaged by injuries and unable to generate enough quality depth. (Stop me if you’ve heard that before literally every single season.)

“We’re playing musical chairs,” said Gundy of the line. “Jason Brooks (Jr.) was the best offensive line we had the last three weeks and he couldn’t be here this game. So we’re playing too many musical chairs.”

“I could be real obvious and say if we don’t get guys injured, that would help,” he added. “But, I try to be nice. Just got a few guys beat up, so unfortunately we’re down a few guys. You get down three scores and four scores and you’re down some guys and they can open up their playbook on defense.”