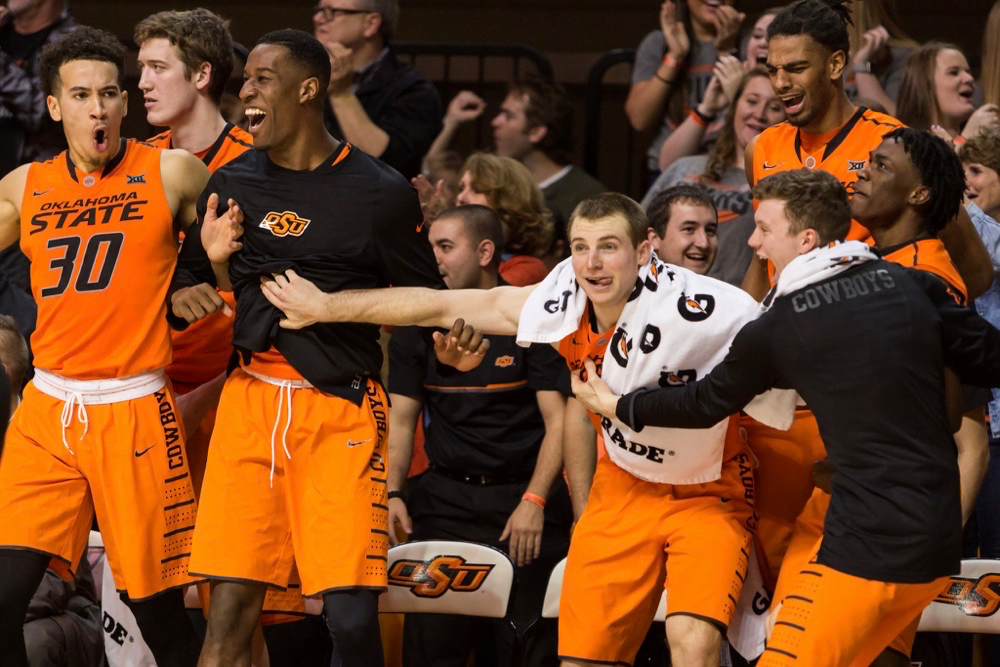 On deck are the rival (9-16, 3-10) OU Sooners, winners of the Trae Young sweepstakes and KenPom’s heavy underdog for Bedlam Part 2 (11 percent chance of Sooner victory). After snapping a seven-game skid with a win over Texas on Tuesday, OU will try and make a clean sweep of their rivals this week.

What do you think about that, Jawun? If Shaka Smart’s Horns had taken down the Sooners in Norman, his 2016-2017 team would have beaten Oklahoma teams more than Charlie Strong did in three years. Unfortunately for him, that wasn’t the case.

OU only turned the ball over nine times with their primary ball handler done for the year and did enough work on the boards to overcome a (characteristically) poor shooting night (37.3 percent).

Keyed by reserve guard Jordan Shepherd knocking down a couple of threes, the Sooners went on a 10-1 run to close out Texas. Sophomore center Jamuni McNeace recorded his first double-double, finishing well at the rim and pulling down 14 boards.

I’m sure we’ll learn a lot more about the direction of this young Sooner team but it’s more likely a dead cat bounce than a trend they’ll ride.

All the barbells lifted off our shoulders as the Pokes got the first W in Norman  since 2004. (Great Five Thoughts by the first Kyle here)

Carson put it best, “there’s a lid on the bucket in Norman,” and the rims continued to be unforgiving at 33 percent from the field. Credit is due as the Sooners held the high-scoring Pokes to 17 below their average. Unfortunately that lid was on for both team, as the Sooners connected on an icy 5-for-19 from three.

The closing sequence was dreamlike as everything that needed to happen for the Pokes to win finally did. Visions of Bedlams past flashed in our minds where OU had just the right breaks, but this game wasn’t to be added to that list.

Outstanding performances from Jawun with a key steal and assist to save the day with super senior Phil Forte knocking down the game winner. Freshman Lindy Waters calmly nailed threes at opportune times and the Pokes went home happy.

It’s hard to win a gun fight with a knife and from a statistical perspective, Kruger’s Sooners are rolling into a second amendment-embracing GIA with a switchblade.

TOP PLAYS: @Leyfro went off, @j3vans1_ was unstopable and @BigMitch_41 owned the paint. But who had the top play from the TCU win? #okstate pic.twitter.com/0ewiHC0sEG

Much necessary fawning has been done over this Cowboy offense (here and here for example) but for some reason they shot like “diddly poo” in Norman a couple of weeks ago — 38.5 percent from deep was respectable but nothing in the lane was falling (only showing the OSU misses below).

Khadeem Lattin had one of the best games in the league play with six blocked shots against the Pokes and it clearly affected the smaller Cowboy guards (Jawun went 5 for 20 and Phil went 4-for-11). OU big Jamuni McNeace is a plus rim protector that takes away points in the paint as well (more on him in a minute). If OSU gets above 75, it’s over. Oklahoma State wields a potent offensive attack (especially when Hammonds plays like he did on Wednesday) but someone needs to have Forte and Evans are practicing shooting over N’Guessan and someone else needs to get to GIA early and make sure there’s no rim lids.

Hat tip to Kobe Buffalomeat but Jamuni McNeace has to be one of the better sport-appropriate names. Let’s just say more Jamuni, more problems (I had to). And it turns out he’s got some potential to be more than just a pretty name.

It’s hard to see a competitor like Woodard go down late in their career but long-term and developmentally getting young guys like McNeace more usage will be better for the Sooners. Only 31 of 200 possible minutes in the Texas game went to upperclassmen and 26 wisely went to the 6’10” big who delivered with a 14 point/14 rebound breakout game.

McNeace and junior forward Kadeem Lattin combine to average 3.5 blocks per game in league play, turning chippies around the bucket into low percentage shots. This front court pairing against the sweet-shooting Pokes should be a fun match up, but unfortunately for OU there’s not much to be done against a dude doing stuff like this.

Side note: I can’t wait for this guy to man the Cowboy front line. Second in the Big East in blocks as a freshman!

OU has some talented young players in wing Kristian Doolittle, McNeace and the slashing Cameron McGusty but offense in general has been hard. Big 12 ranks per KenPom.com: the Sooners have the 9th most efficient offense, the worst effective field goal shooting team, shoot the lowest percentage from two point range and ninth highest from three.

I wrote earlier in the week (point number three here) that the Pokes are facing some vulnerable offenses, a solid opportunity to get better defensively.

Mitch Solomon answered that call, check out the swat at 43 seconds:

TOP PLAYS: @Leyfro went off, @j3vans1_ was unstopable and @BigMitch_41 owned the paint. But who had the top play from the TCU win? #okstate pic.twitter.com/0ewiHC0sEG

So what’s a good goal for Saturday? Keep the Sooners below 70. That would be a seven-point improvement from the Pokes average and a very reasonable task given recent Sooner injuries. Turnovers should come more naturally with inexperienced ball handlers, so there’s no reason to press unless the half court offense is stalling.

The Cowboys would do well to stay in front of their man and make the 32 percent shooting Sooners try and beat them outside as opposed to risk McGusty and Odomes slicing into the lane.