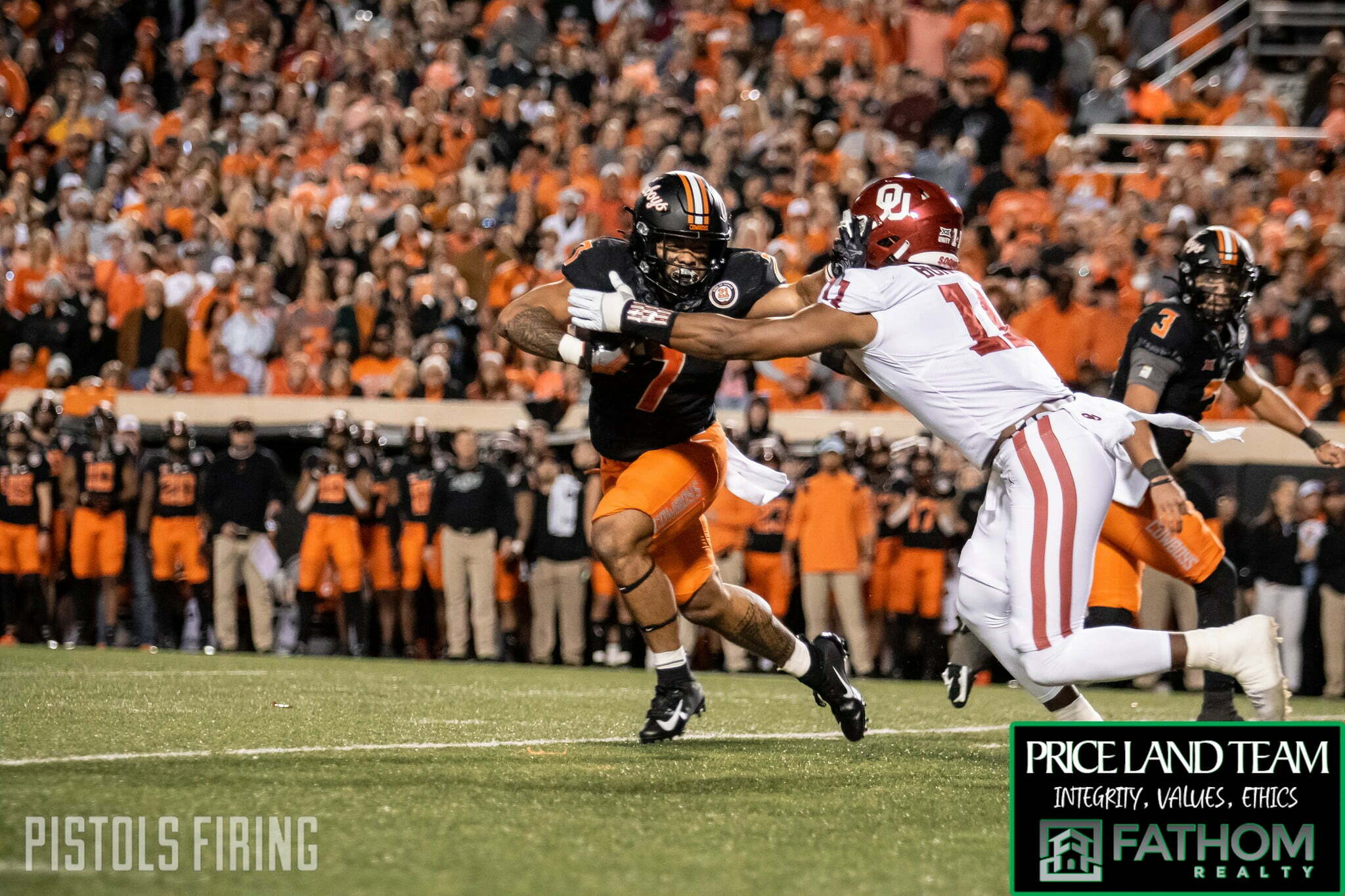 No. 7 Oklahoma State overcame a nine-point fourth quarter deficit to defeat No. 10 Oklahoma 37-33 in a Bedlam for the ages. There were multiple turnovers, missed opportunities and self-inflicted wounds by both teams. It was one of the weirdest, ugliest games I can remember. You wouldn’t want it any other way.

With the win, the Cowboys move to 11-1 (8-1 in conference) and move on to the Big 12 Championship game in Arlington. And most importantly, they won’t have to face the Sooners again. With Baylor’s win at Texas Tech on Saturday and OU’s loss, the Sooners were eliminated from Big 12 title contention.

OSU made the types of mistakes you can’t make and still beat OU. A safety. A muffed kickoff return for a touchdown. Two interceptions. But OSU was able survive it all thanks to some grit and an impressive second half by the defense.

Any notion that this would be a low-scoring, defensive affair disappeared early. After each team punted on its first possession, the rival offenses exchanged a pair of touchdowns a piece.

OSU’s defense gave up 261 yards in the first half after averaging 268 per game coming in. The Cowboys came in ranked third in the nation, allowing just 96 plays of 10 yards or more (8.7 per game). But the Sooners gashed the Cowboys for a lot of huge chunk plays. OU had six passing plays of at least 15 yards and six rushes of 10 or more.

Lincoln Riley saw something about OSU’s defense on film and went heavy on with OU’s H-backs/tight ends Austin Stogner, Jeremiah Hall and Brayden Willis. The trio combined for 166 of OU’s 252 receiving yards and two of its three receiving scores.

Brennan Presley etched his name in Bedlam lore putting the Cowboys up 21-14 early in the second to answer a Sooner TD.

Momentum shifted late in the second quarter which started a slow-burning meltdown for the Cowboys.

While charging down the field in attempt to build on his 24-17 lead, Spencer Sanders threw his first interception in three weeks. Caleb Williams paid it off with game-tying touchdown pass to Brayden Willis to knot it at 24-all and that’s the score OSU would take into halftime.

But the Cowboys’ troubles were just getting started. OSU’s first offensive play of the second half, Dominic Richardson fumbled back into the end zone for a safety. It did appear that Jalen Redmond was offsides.

On the very next play, Brennan Presley muffed a kickoff return which was jumped on by a Sooner to make it 33-24, cancelling out his TD return. The Cowboys made a couple of plays to get down the field but sputtered out, having to settle for a field goal attempt, which Tanner Brown missed from 40 yards away.

But things didn’t exactly go smoothly for the Sooners either. OSU almost gave up a huge stop when Devin Harper was flagged for a late push on a third-down-and-mile stop. But the ref picked up the flag and the Sooners had to punt. The Sooners were hit with 12 penalties to OSU’s six.

Eric Gray muffed a return of his own. This was would-be punt that gave OSU the ball on the 5-yardline. OSU turned into a touchdown a couple of plays later.

When they were needed the most, the Cowboys’ defense made a play like it has all year, pitching a shutout of OU’s offense in the second half and squishing Squinky into the turf.

After OSU had to punt up just four with 4:20 on the clock, its defense forced a turnover on downs. And when its offense couldn’t make the line to gain to ice the game, the Pokes defense did it again, but not without a Bedlam’s does of drama.

Caleb Williams broke free on a 56-yard run to the OSU 24-yard line. But then the Cowboys forced three-straight incompletions before Collin Oliver sacked Williams on fourth down to seal the win.

Spencer Sanders finished 19-of-31 for 214 yards, one touchdown and two interceptions. He led the Cowboys with 93 rushing yards and another score.

Tay Martin led the Cowboys with 89 yards on seven catches with one touchdown through the air and another on the ground. Brennan Presley added 40 yards on three catches as well as a kickoff return for 42 yards and another for 100.

Malcolm Rodriguez led the Cowboys with 11 tackles, three tackles for loss, two sacks and a pass breakup. Collin Oliver had two sacks including the game-sealing play.

Next up, the Cowboys head to Arlington for their shot at their second Big 12 championship.