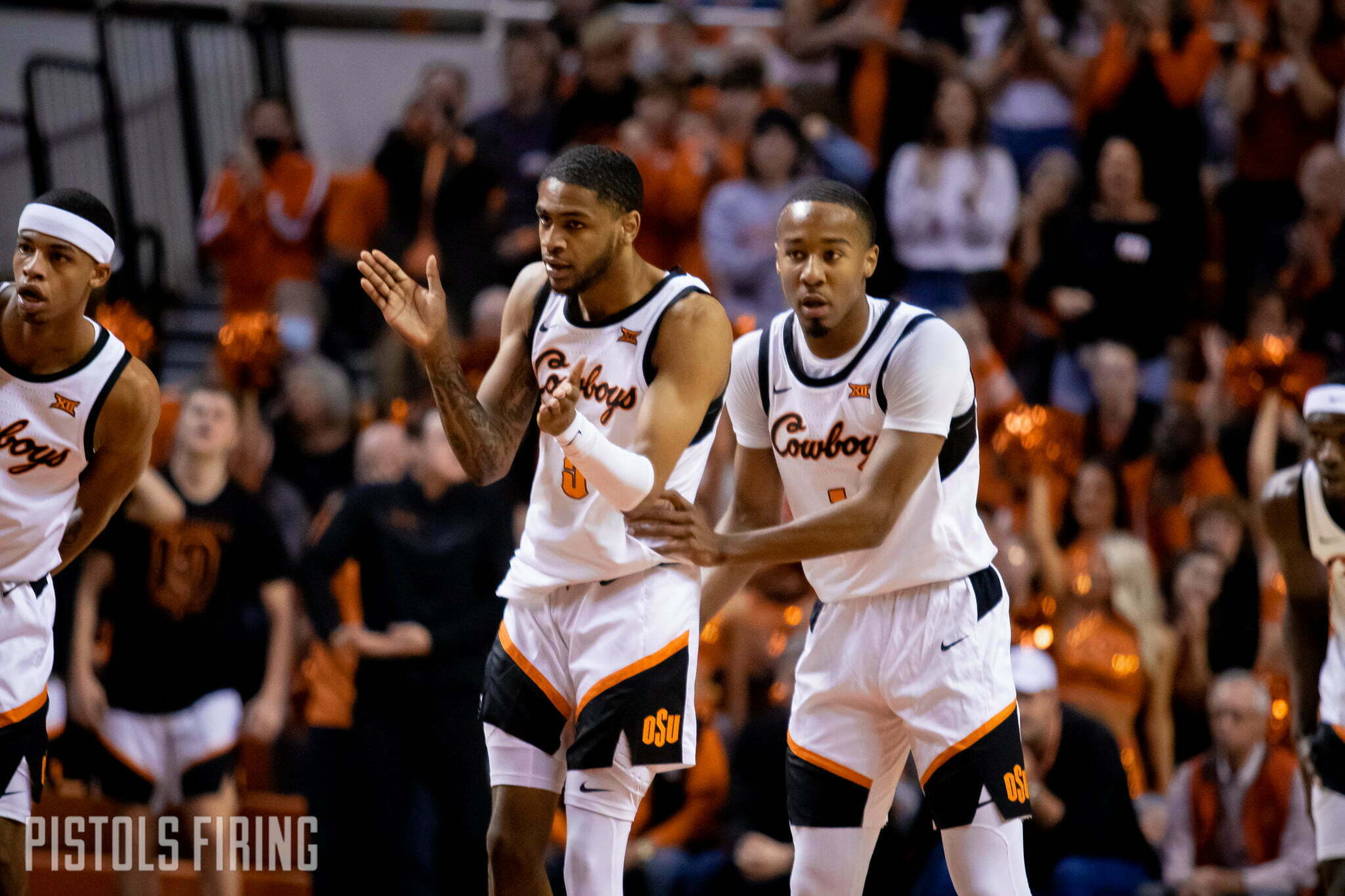 Mike Boynton referred to OSU’s road game at Florida a week ago as the closest thing the Cowboys would get to a postseason feel. Maybe Bedlam is better.

The Cowboys defeated the Sooners 64-55 on Saturday in front of a raucous home crowd in Stillwater thanks to a collective effort. Four different Pokes scored in double digits, including a combined 22 points off the bench by in-state products Kalib and Keylan Boone.

The victory ends a four-game losing streak for OSU and continues a three-game skid for the Sooners. It’s OSU’s fourth-straight win in the Bedlam series (and Porter Moser’s first loss in his first appearance as OU coach).

The Cowboys started 6-of-7 from the field and the Sooners knocked down four of their first six shots. The first five minutes of hoops could be stored in a time capsule to tell future generations what the Bedlam rivalry could be, but both teams regressed to their defensive selves.

The teams combined for 27 points in the first five and half minutes of play, but just 30 the rest of the first half. The Cowboys took a 29-28 lead into the break after a timely deep ball by Keylan Boone.

While the first half started with a bang, both teams came out shooting blanks in the second. OSU missed its first three shots and OU’s couldn’t connect on three of four. Add to that four turnovers apiece in the first five-plus minutes of the second, and you get the ugly picture.

At one point early in the second half, Moussa Cisse tipped the ball away from Elijah Harkless who proceeded to steal it right back from Rondel Walker on the runout. Moments later, Harkless turned it over again on a bad pass.

All in all, the teams combined for 20 second-half turnovers but the Cowboys did a better job of turning those errors into buckets. OSU scored nine points off of TOs to OU’s four in the final frame.

But the Cowboys were able to clean things up and get back to what they are good at, scoring in transition and relying on their length and athleticism.

That was part of an 11-0 OSU run that ended midway through the period and the Cowboys were able to keep the Sooners at an arm’s length from there.

The Sooners rebounded to pull within six, but Moussa Cisse answered, igniting the home crowd with another lob connection from Isaac Likekele. Cisse made the free throw to put the Pokes up 57-48 with 1:42 left.

No Bedlam would be complete without some late-game drama. Keylan Boone caught OU guard Jordan Goldwire with an elbow to the jaw on a clear-out. A flagrant ruling would have given the Sooners a chance to cut it to four and get the ball back at a crucial juncture. But after a lengthy review it was deemed a common foul. The Cowboys collected the inbounds pass and the Sooners had to foul Rondel Walker to stop the clock. He would make four-straight shots from the charity stripe to keep the Sooners at bay.

In the loss to Kansas State on Wednesday night, OSU had three players score in double digits for just the second time in conference play. On Saturday, four Pokes scored at least 10.

Kalib Boone provided a scoring boost for the Cowboys, pouring in all 12 of his points in the second half. At one point in the second, he scored nine-straight points for the Cowboys. He made 4-of-5 free throw attempts, grabbed five rebounds and blocked a shot.

Keylan Boone did his damage early, scoring eight of this 10 points in the first, helping the Pokes outscore the Sooners 26-10 off the bench.

Moussa Cisse shared the team lead with 12 points on eight attempts (three lobs). He also grabbed three boards, blocked a shot and affected countless others. Rondel Walker rounded out the double-digit Pokes with 11 on just four shots. He made a big 3 late and knocked down all four of his free throws in crunch time.

The Cowboys out-shot the Sooners, knocking down 48 percent of their shots while holding them to 38 percent, and made 12-of-16 free throws. The Sooners were 3-of-4 from the stripe.

Next up, the Cowboys head to Fort Worth on Tuesday for a 6 p.m. tip against TCU.