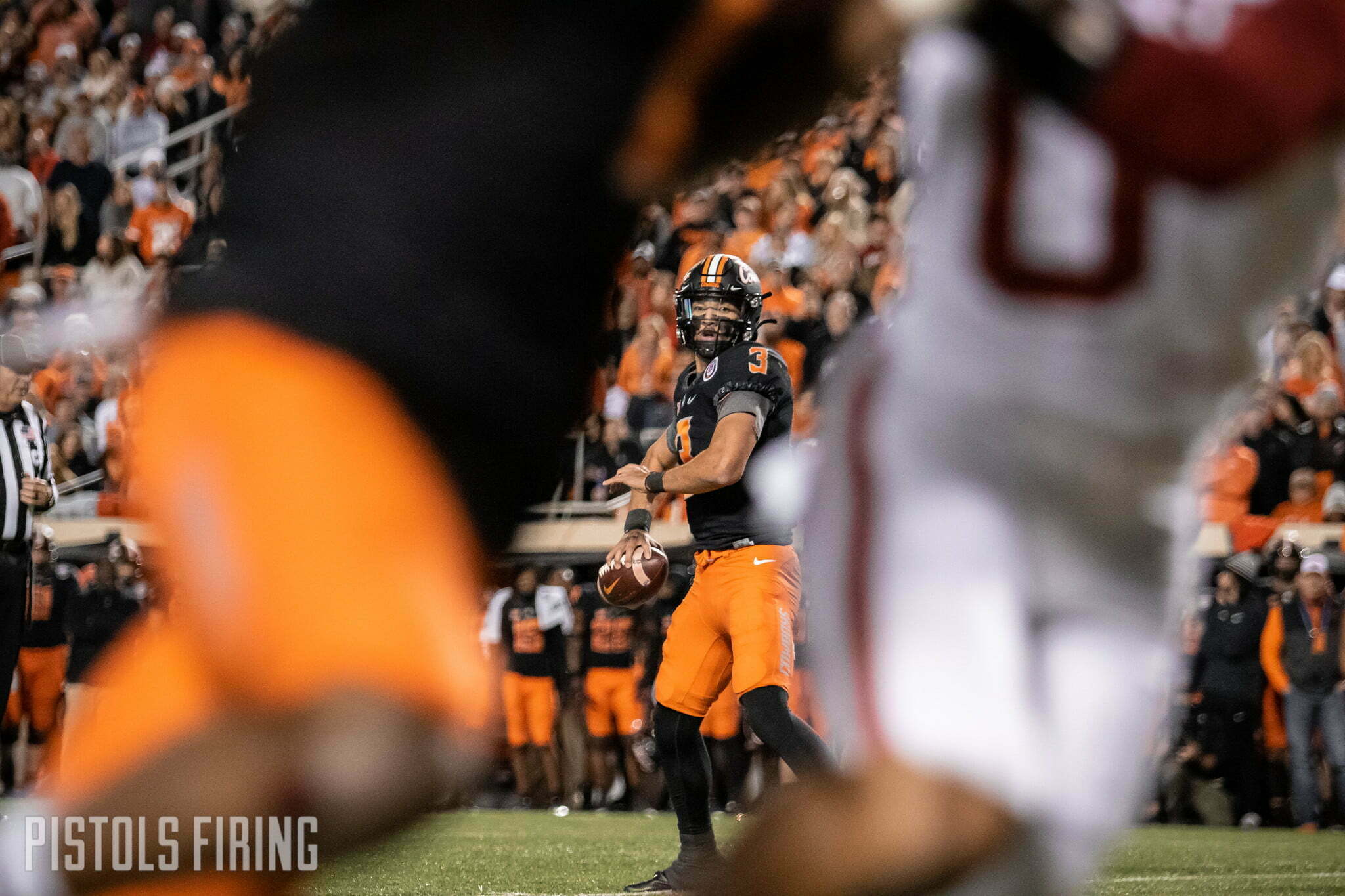 Bedlam weekend is officially upon us. Praise be!

OSU vs. OU this year takes on new meaning for myriad reasons: OU is officially leaving the Big 12 in coming years, neither team is really in the Big 12 title race, both teams are skidding and OU has a new coach.

But Bedlam is still Bedlam, and a big game is on tap Saturday night with a ton on the line as each program looks to capture some momentum heading into the homestretch of the season.

Here are the PFB team’s predictions for the game.

OSU offensive MVP: Spencer Sanders — without question. Him just stepping onto the field this past Saturday made the world of difference in terms of energy.

OSU defensive MVP: If OSU wants to win, I might go with Mason Cobb. Run fits and tackling will be crucial for the Cowboys, and with Cobb sitting in the middle of that defense, he’ll have to play well for OSU to win.

OSU wins if: It can contain Eric Gray. Gray is the only thing the Sooners have going from themselves. Gray ran for 211 yards and a pair of touchdowns against West Virginia last weekend, and OU still lost. If the Cowboys can stop him, it’s hard to see a way the Sooners win this game.

I feel like this needs some explanation. I think OSU is the better of these two football teams. However, I think this is a bad matchup for the Pokes. Gray is just about the only positive thing about the Sooners this season, and run defense has been a major weakness. Here is a list of guys who have gone for more than 100 rushing yards against OSU this season: Xazavian Valladay (118 at 5.6 YPC), Kendre Miller (104 at 4.7 YPC), Bijan Robinson (140 at 5.8 YPC), Deuce Vaughn (158 at 7.2 YPC) and Devin Neal (224 at 7.0 YPC). OSU is 2-3 in those games, and with a less-than-100% Spencer Sanders, I’m just not sure the Cowboys can get back to .500 in that department. Call it scars of OSU being 8-19 in Bedlam since I’ve been on this planet, but I’m just not sure the matchup plays in OSU’s favor this weekend.

OSU offensive MVP: Gotta be Spencer Sanders. Run game is totally broken for OSU right now, so if OSU wins, Sanders is going to have to put his superman cape on and fly. He’s still nursing various ailments, but he’s a gamer who is seemingly always dialed in for big spots. If he goes into Norman and goes for 300 yards and three scores it wouldn’t surprise.

OSU defensive MVP: I’m taking Brock Martin. Collin Oliver seems like the obvious pick here since he closed out the Iowa State win last week and closed out the Bedlam win last year. But look closely at last week’s final defensive stop — a sack from Oliver — and it was Martin who set up his teammate to seal the deal. He remains an unheralded but hugely important piece of this defense, and it’d be fitting for the super-senior from within the state to play an instrumental role in getting the job done.

OSU wins if: … it can rush for 150 yards on the game. Doesn’t matter where it comes from. Sanders can get it done by himself, Dominic Richardson can go off, Ollie Gordon could blast into orbit to reach the mark. But OSU has to find a way to avoid being one-dimensional, which means it must find a way to run the ball and strike a balance to set up Sanders in the passing game. OSU is ninth (out of 10) this season in rushing yards per game among all Big 12 teams, averaging 129.8 yards per game — a bar it has not cleared since the Texas game. But if it can grind it out on the ground in any game and find a way to improve it should be against OU, which ranks dead last in rushing yards allowed per game among all Big 12 teams. Which leads me to my prediction . . .

OSU offensive MVP: Ditto. Sanders’ ability to operate the offense like he’s describing the back of his hand gives the Cowboys a shot at knocking off the Sooners in back-to-back years. Sanders is definitely not operating at 100 percent. But his effectiveness comes down to him being healthy enough. If he looks as good as he did in the fourth quarter against Iowa State, the Pokes have a chance to drop some points on a Sooner defense that’s been reeling of late. Things should be easier than they were against the Cyclones.

OSU defensive MVP: A year after Collin Oliver etched his name into Bedlam lore, I’m looking at another in-state stud to make plays in his first Bedlam. Give me Kendal Daniels to wreak havoc on the Sooners’ (also reeling) offense. I expect plenty of big hits to seemingly come out of nowhere, and I also expect him to come up with a turnover or some other memorable game-swinging play.

OSU wins if: This is a two-parter. If Sanders is healthy enough and if OSU can make OU one-dimensional, the Cowboys come home with a win. Eric Gray is going to get his but Cowboys defenders need to spend a lot of time getting up close and personal with Dillon Gabriel. If they do, I predict that he has another tough outing in November. And if they do both, I predict that the Cowboys win more comfortably than most expect.