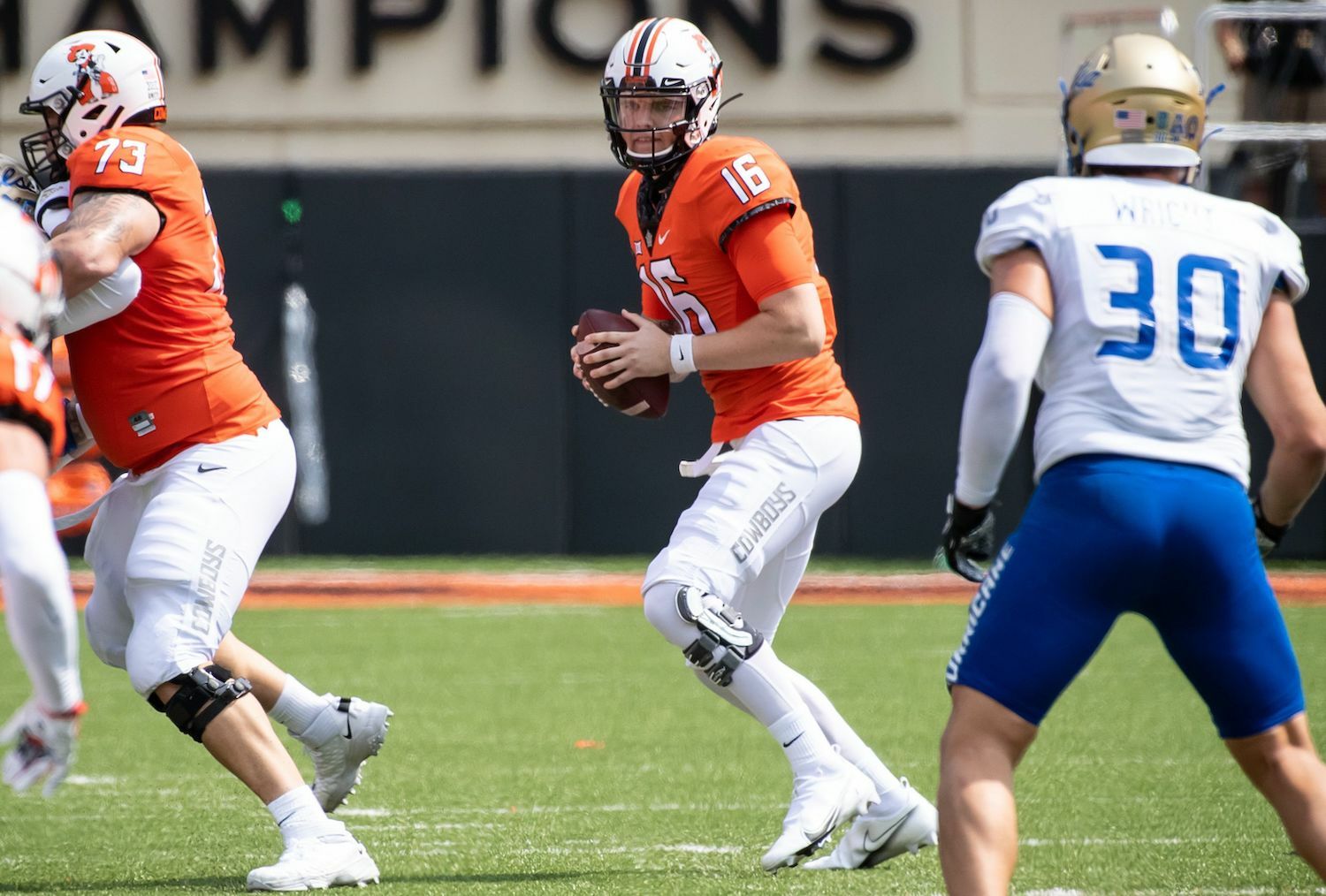 Truth is, not only can you not make definitive conclusions based off a single game, but for OSU, that single game is often against a not-great team. So let’s not write the season off based on a grind-out win over Tulsa, shall we? (And conversely, let’s not declare OSU the Big 12 favorite when they smash, say, West Virginia.) The injury bug bit in-game Saturday, and it was a weird four quarters. Sometimes … that happens!

To avoid knee-jerkiness, I’m starting a weekly Monday column — beginning today called Believe it or Not, an idea I’m ripping from my CBS colleague Heath Cummings — wherein I recap some of the weekend’s hottest #takes. This will be a clear-eyed perspective from a 50,000-foot view, with hyperbole (hopefully) eliminated. The goal is to give perspective but also to assess some of the week’s biggest questions and storylines.

So let’s get to it. I’ll try to keep these between three and five items, and make determinations accordingly.

1. Believe it or not: OSU has something in backup QB Shane Illingworth

With OSU’s offense on life support, Shane Illingworth supplanted Ethan Bullock and instantly breathed life into the unit, leading the team to a much-needed TD drive. He finished the game 4-of-5 passing for 74 yards, and with one rush for -3 yards.

Mike Gundy said after the game that Illingworth has been out “for a long time on contract tracing,” so his practice time has been limited in recent weeks (which likely explains why Bullock got the first reps at QB when Sanders went out). But … Illingworth definitely didn’t look like he missed a beat. He was crisp with his pocket movement, made some confident throws down the field and looked like he had a firm grasp of the offense. He might just be a gamer.

“I think he handled it really well, and I didn’t notice them scaling back anything with him being in the game,” said Gundy on Saturday.

Sanders’ availability for Saturday’s Big 12 opener is up in the air, but Illingworth looks plenty capable as a passer and showed some spunk and swagger I really liked. He’s already First Team All-Confidence as a freshman, and that’s big should he be thrust into an unexpected lead role earlier than anticipated.

How many fourth-year running backs have breakout years as backups? The list has to be small, right?

Either way, I think we’ve got to consider the possibility that LD Brown might fall into that category. It was Tulsa, so I’m not ready to say he should get 20 touches a game. But Brown looked as spry and nimble as I’ve seen him in four years, running determined and with surprisingly improved vision.

“He’s practiced really well,” said Gundy Saturday. “He’s always worked hard, but over the last month, he’s just looked a little different in practice. I wish I could give you a reason why, but he’s practiced really hard, his attitude’s been really good and I thought he was a very physical runner [Saturday]. We’re certainly gonna need him, so I’m excited about what he accomplished today.”

His nine carries should be about what he gets every game moving forward, which would be a significant uptick after toting it a total of 23 times in conference play last season.

“He was awesome. LD played his best game in all areas,” Gundy said Monday. “When he had the chance to rush the football, he ran extremely hard, and he did a really good job with ball security. And I told him that. I was thrilled with him. He played better and more aggressive in that game than he has in his career here. His touches will be increased with that.”

3. The offensive line’s performance is of grave concern

Tulsa recorded six sacks (!) on Saturday, and 14 tackles for loss. It was not a sterling performance for the OSU offensive line. And when you factor in offseason losses of Bryce Bray and Jacob Farrell, it’s concerning that there was no real cohesion for a unit that had questions entering the season.

“We were playing musical chairs,” said Gundy on Saturday. “We had some guys go out, so we had to move some guys to different positions to try to settle in, to get the guys in there that have practiced the most.”

But, no time to panic. The injury bug snipped this unit as well, and things should only improve. At the very least, we need to see more before being overly concerned. OSU still rushed for 141 yards on the ground Saturday.

“We were below average [on the offensive line], based on musical chairs,” Gundy said Monday at his weekly presser. “When you move people around that much, the continuity is difficult. Hopefully we can get set in what we need, guys can get quality reps this week, and have them where we want them … when you have six different people moving multiple spots in a game, you’re not going to have as much continuity and consistency as you want.”