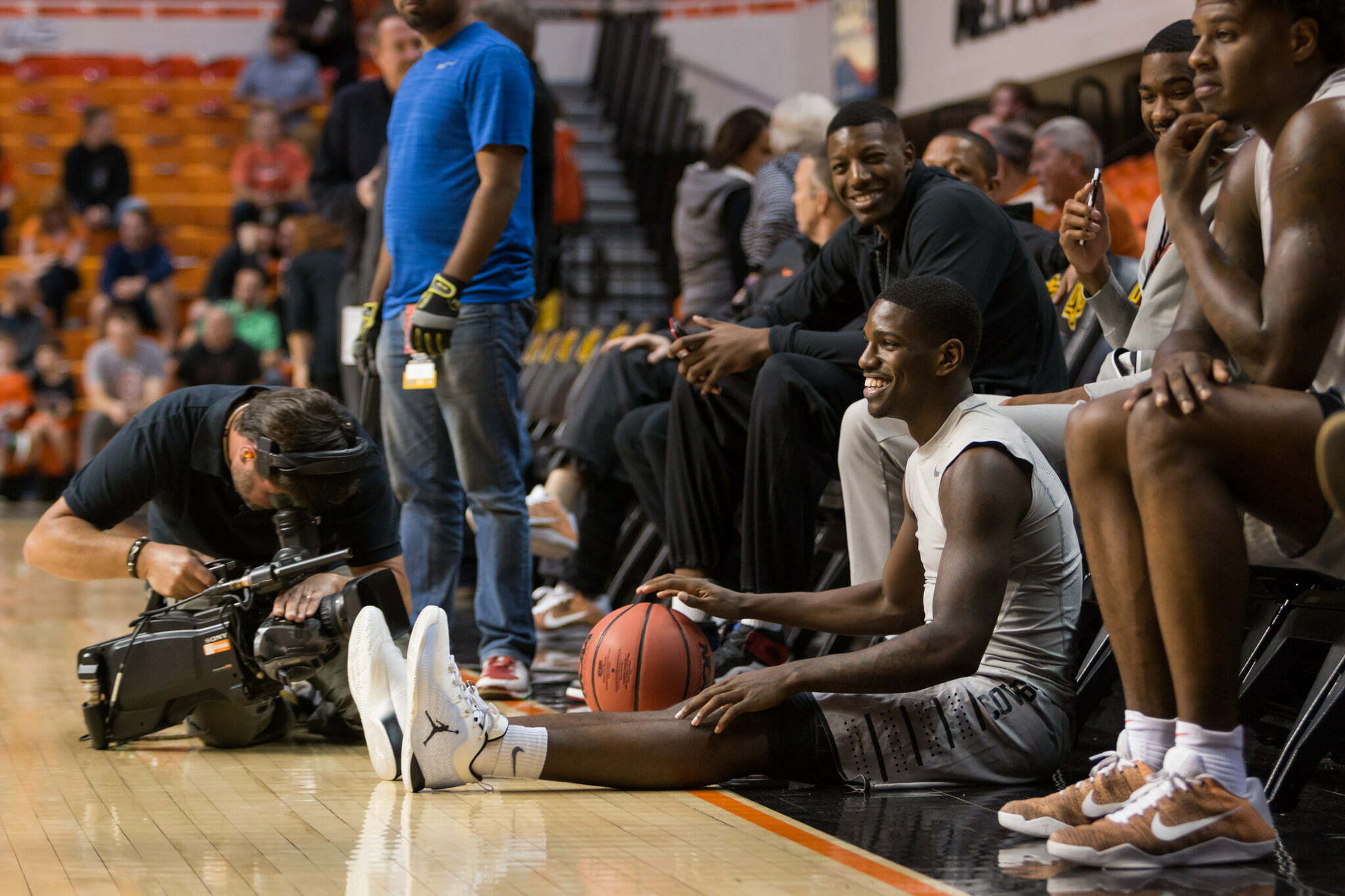 Jawun Evans is ready for the NBA.

It’s actually pretty amazing how much Jawun Evans went through in only two years in Stillwater. He was recruited and signed on to play for Travis Ford only to have his excellent freshman year cut short by a season-ending shoulder injury.

Then directly after his freshman year ended, Travis Ford was canned and a new head coach, Brad Underwood, stepped in. Near the end of last Summer, incoming transfer forward Tyrek Coger tragically died in an offseason conditioning workout with Jawun and the rest of the team at Boone Pickens Stadium.

Last year, Evans put together one of the best seasons by a guard in Oklahoma State’s history. First team All Big-12, 19.2 points per game, 6.4 assists per game, 3.4 rebounds per game, and lead the Cowboys back to the NCAA Tournament after just a 12 win season in 2015-2016. Then a day after the season ended in the first round against Michigan, Brad Underwood skipped town for Champaign, Illinois.

So Jawun Evans entered the NBA draft and hired an agent, and he’s ready to make an NBA team in need of a point guard incredibly happy in the late first round/early second round of the draft. So where are the best places for Jawun to land? Let’s look at five potentially excellent fits for the former Cowboy great.

Woo boy. Can you imagine Evans as the heir apparent to Tony Parker in San Antonio, playing for Gregg Popovich? Jawun can step in and learn from one of the best point guards of his era in Tony Parker, who also happens to be near the end of his career.

He also presents a nice upgrade in the meantime as a backup over current backup point guard Dejounte Murray. Evans running point, playing for the best coach in the NBA with a top 5 player in Kawhi Leonard? Put it in my veins. San Antonio will draft at No. 29.

You know who else needs a backup point guard in the worst way? That team just down I-35 from Stillwater that has the best point guard in the world starting, and almost nothing at point guard behind him. No offense to Semaj Christion and Norris Cole this year, but Jawun Evans, right now, presents a huge upgrade for the Thunder over those two when Russell Westbrook needs a breather.

Evans would provide a little shooting and a lot of playmaking ability off the bench for Billy Donavan’s squad, and he’d be an instant fan favorite in Oklahoma City. It could make a lot of sense for OKC at 21 in the first round …

The Raptors were wiped out in four games by Lebron James and the Cleveland Cavaliers, but Toronto finished 51-31 this year, and were the No. 3 seed in the Eastern Conference. Even better- starting point guard Kyle Lowry is a free agent, and the only other point guards on the roster are Cory Joseph and Fred Van Vleet.

Evans could step into a winning team, play as a backup (or even fringe starter) right away — Toronto is also picking at No. 23, which could be near the ceiling of Evans’ prospects in the first round.

Jawun Evans brings a lot of strengths to the table, but one of his biggest knocks? Size. Measuring just 5’11.5 in shoes at the combine, Evans will be very undersized at the next level. But if there’s a team that has proven a soft landing spot for smaller guards in the league, it’s Portland.

Damian Lillard and C.J. McCollum combine for one of the most dynamic and fun backcourts in the NBA, and have former UConn star Shabazz Napier coming off the bench. Evans could join the diminutive but high-powered Blazer guards and learn from some of the best in the league. The Blazer picks at No. 20 and No. 26 in the first round, in the ballpark where Jawun is expected to go.

I never thought I would type this, but the Bucks are an incredibly intriguing team, and a potentially phenomenal fit for Jawun Evans. Hear me out — the Bucks have the league’s most unique young talent in Giannis Antetokounmpo, who is already taking the NBA by storm and will only get better. They also have an emerging young forward in Khris Middleton.

And while the Bucks have another exciting young guard at Malcolm Brogdon, Evans presents an upgrade on Matthew Dellavedova. Even better? The coach is Jason Kidd. Evans would learn the hard ropes of the NBA under the tutelage of one of the best passing guards in recent memory. Milwaukee picks at No. 17, which feels a little high for Jawun Evans, but you never know what could happen on draft night.