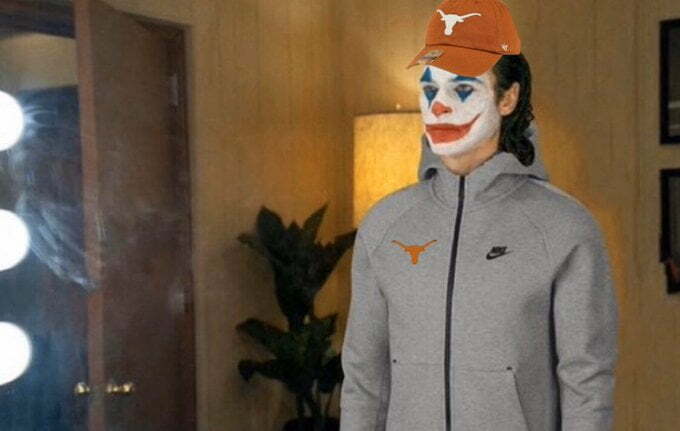 OSU rolled over Kansas with little effort, but there were still some compelling things come across my timeline both regarding the Cowboys’ game and the other happenings around the Big 12.

I thought I’d share some of my favorites. Let’s start with the OSU game.

When Chuba outgains your team 100-96 in the first half, and it doesn't feel like he's done a single thing yet. pic.twitter.com/UnUDMycMDu

KU tried anything it could think of to slow down Chuba… ???

Anyone wanna guess what Gavin Potter was trying to accomplish here?? ??? pic.twitter.com/xVMpsg7mUG

A few more fellow Canadians showed their support of Chuba this week and he responded in kind.

Preciate it @howiemandel !!! I’m trying to get on deal or no deal ?? https://t.co/kCDUqcvJqR

Against Mike Gundy’s wishes, Spencer took flight to get a first down against KU. He moved the chains but the optics weren’t as good as he probably expected, and even worse for Kansas cornerback Kyle Mayberry.

Dru Brown spelled Spender Sanders in the second half and connected on a nice deep ball to Dillon Stoner for 43 yards and a score.

Dru B. Swagger to Stoner pic.twitter.com/6l3QqC2Wum

Matt Ammendola missed his first field goal of the season last game after Kyle Porter shouted him out for being perfect on the pod. After he addressed the issue on a subsequent episode he apparently made things worse. Ammendola missed three kicks on Saturday.

Outside of Stillwater there were some big games with actual Big 12 implications. Let’s start with the primetime matchup between unbeaten Baylor and Oklahoma.

It was all ugly for the Sooners early.

First half recap in Waco. pic.twitter.com/Tr5Ll00LUj

Baylor win put some respect on it and quit playing.. they are making me a believer

You right ou do magic in the second half https://t.co/d7wZbBOKXt

But the Sooners came roaring back, scoring 24 unanswered points to take the game and run Baylor’s perfect season.

Pretty much sums up what happened in the second half. #Sooners

Pretty sad that not one person tried to do the heimlich on Baylor for the entire second half.

I can’t believe I forgot about Brady Jr that quick… hurts or burrow for sure https://t.co/jN1ZWzSKwo

It's like OU Twitter took Xanax in the first half and ripped about 5 lines of blow in the second half.

do you want to see your fixer upper baylor pic.twitter.com/Vl6tvg6jke

The other big matchup involved No. 22 Texas heading to Ames. The Longhorns fell behind 20-7 before staging the comeback to take a 21-20 lead, but were beaten on a late field goal by the Cyclones.

Have all of Texas’ games except OSU been decided by a late field goal?

Either way, Texas has now alternated wins and losses every week since beating OSU.

a post game mood staring at the mirror asking why I do this to myself @TexasFootball pic.twitter.com/kphKpnRw9k